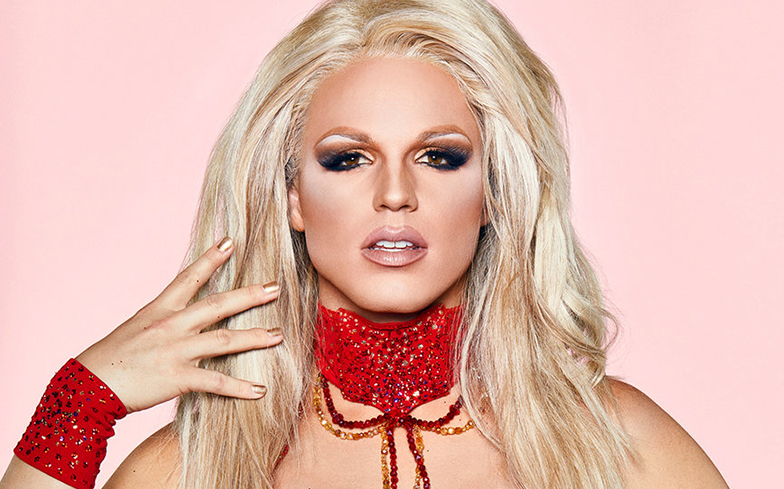 “Drag is so offensive already, just let it be offensive.”

When we spoke to RuPaul’s Drag Race contestant Derrick Barry – who’s also the world’s most famous Britney Spears impersonator – at DragWorld UK this year, she reflected on her time on the show and the “polarising” character she played.

“I love that I was a character on Drag Race and that it was polarising. People either loved me or they hated me, but isn’t that kind of what Britney is too? People either love her or hate her. That’s how you know you’re doing something right,” she said.

“People say you haven’t made it until you have haters, and I didn’t really like thinking that way, but its true, that’s the business. If you’re liked by everybody then it’s so safe and boring, people don’t even care about those people. It’s predictable.”

Related: Derrick, Nebraska and Nick are a throuple with “zero regrets”

When asked if she thinks the contestants who appear on Drag Race are now too concerned with what viewers at home will think of them, Derrick agreed and argued that queens are “too censored” and that drag should have capacity to offend.

“Drag is so offensive already, just let it be offensive. We’re men who are dressing up as the opposite sex or dressing up as a clown, whatever we’re doing, so it’s sad that this is happening.

“But it’s happening to actors and actresses in Hollywood and TV shows and news anchors, so of course it’s gonna hit drag queens too.”

She continued: “It feels like people are playing it so safe now, but we’ve got to be stronger than that mindset, and sometimes you have to tell people, ‘Look, a joke is a joke, and if it’s funny it’s funny’.

“If you play that part and you play it too well then people are like, ‘She’s just a bitch, I hate her’, but it’s like, ‘Do you really hate it? Or do you love the entertainment behind it?’ Those are two different things.

“I love seeing a movie and I can’t stand the character because the actor or actress is playing it so well. I don’t hate them, I hate the character they’re playing.

“It’s a little different in reality TV because you’re supposed to authentically be yourself, but we’re not, we’re tired and hungry and we’re away from our families, and we’re competing for one hundred thousand dollars against strangers. All gloves are off.”

Earlier this year, we got Derrick to rank all nine of Britney’s studio albums, and the results might surprise you – check that out here.