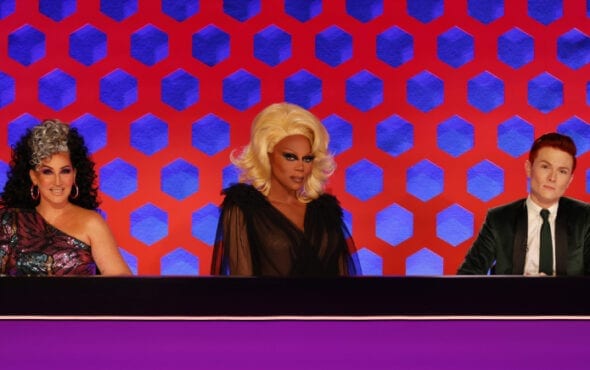 Drag Race Down under is back and it’s jam-packed with Snatch Game laughs and a shocking elimination.

The episode started off with the queens entering the werkroom after JoJo Zaho’s elimination. After they reflected on their first challenge and runway, the contestants dived back into competition mode.

The next day, the queens arrived in the workroom with competitive attitudes and their eyes on the prize. After participating in an impromptu “shooey”, the contestants got interrupted by pop music legend, Kylie Minogue.

“Hey Racers it’s me, RuPaul, doing my very best Kylie Minogue imitation, which I have to say is not bad at all,” Minogue joked.

After receiving an inspirational speech from the Disco songstress, Mother Ru entered the workroom.

For this week’s maxi-challenge, the girls were taken by surprise when RuPaul announced that they would be participating in the Snatch Game.

During a confessional, Art Simone screamed: “Snatch Game episode two, what the f*ck? That’s my internal monologue. I tried to keep calm on the outside but I am fucking terrified.”

After the shock settled in, the queens went to work on their characters. Of course, we couldn’t have a Snatch Game without the girls bumping heads over characters.

While discussing who they would be portraying in the popular segment, Scarlet Adams and Art Simone realised that they both had Bindi Irwin costumes. Although Adams had other options like Jennifer Coolidge, the queen admitted to having six pages of jokes for Bindi.

After a brief pow-wow with RuPaul, the queens geared up for their characters’ debut.

The Snatch Game proved to be challenging for many of the competing queens. From Art Simone and Karen From Finance to Coco Jumbo and Scarlet Adams, the laughs were difficult to come by.

The next day, the queens discussed each of their Snatch Game performances. Art Simone praised her Bindi Irwin gig, stating: “I think my performance was there. I had a concept. I had a character. She was fully realized.”

Coco also opened up about her Lizzo performance and explained that she froze on the spot.

“It’s never happened before, but like, usually I could come out of it. I just went into a hole and couldn’t pull myself out of it,” she said.

Kita Mean expressed her fear of being in the bottom two, due to her performance as Dr Seuss.

For this week’s runway challenge the queens were tasked with the category “Seasickening”.

The queens stunned the judges with their eccentric and showstopping lewks. In the end, Anita Wigl’it took home the prize for this week’s maxi-challenge.

Kita Mean and Etcetera Etcetera both ended up safe with the remaining queens all up for elimination.

The judges held nothing back when it came to giving the ladies critiques on their Snatch Game performances and runway lewks.

After the intense review from the judges, the queens went back to untuck in the workroom and were treated with a surprise appearance from Dannii Minogue.

As the queens prepared for the impending lip-sync, they asked Minogue if she could give them advice on performing.

“You know what, not every performance is gonna be perfect. I’ve had some doozies where I’ve fallen through the set. But what did I do? I kept going,” she explained.

In the end, Art Simone and Coco Jumbo landed in the bottom two and had to lip-sync for their lives to RuPaul’s track I’m That Bitch. The two queens delivered sickening performances full of fierce energy and sass.

In a shocking turn of events, Mother Ru sent home Art Simone, who many considered a front contender in the competition.

During an emotional confessional, Art expressed her disappointment with the decision.

“I’m feeling very disappointed that I’ve let down all my friends and family at home, and I failed completely,” she said. “I’ve got thousands of fans that are expecting a certain level from me, and I clearly didn’t deliver it.”

Drag Race Down Under did not come to play and no queen is safe from the wrath of Mother Ru and the judges.

For next week’s episode, the queens will be tasked with debuting the brand new Drag Race Anthem, Queens Down Under.

Tune in every Saturday on BBC iPlayer for new episodes.