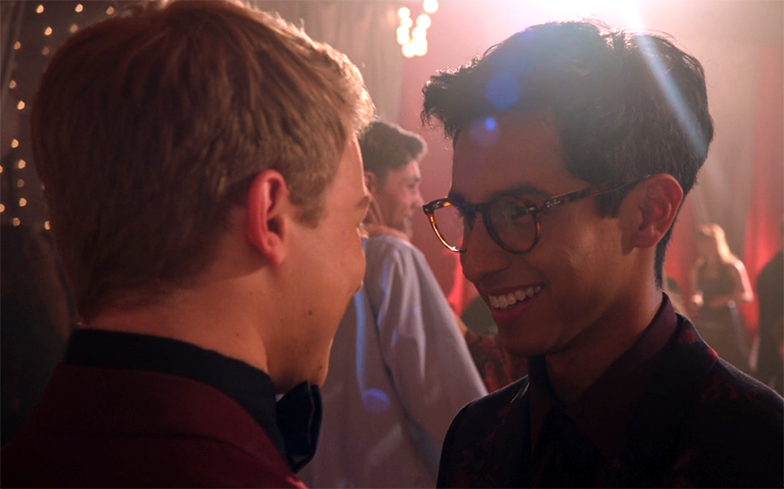 This is a landmark moment for Disney.

While the original High School Musical film series featured a character most viewers just assumed was gay (Lucas Grabeel’s Ryan Evans), this new show marks an out and proud LGBTQ character in the form of Carlos (Frankie Rodriguez).

In the fifth episode of the spin-off series, which airs on Disney’s new streaming service, Carlos asks his crush Seb (Joe Serafini) to their homecoming dance; Seb agrees, although he’s nervous about dancing together in front of the entire school.

After dealing with a fiasco at his farm, Seb doesn’t immediately show. However, he makes it to the dance in time to conquer his fears and slow dance with Carlos and yes, there might have been some tears on our part.

“I hope that viewers can take away that being yourself really will get you so much further than trying to be somebody else, and I think that can spread across literally anything,” Frankie told us back in November for his GAY TIMES Amplify cover.

Related: Vanessa Hudgens on Second Act and the lack of LGBTQ representation in High School Musical.

“Growing up there wasn’t a lot that I was able to watch on television that I could identify with, it wasn’t really until Will & Grace that I saw gay men on television just living their lives, and I was like, ‘Oh, yeah, they’re normal just like everybody else’.”

Frankie also said he loves that Carlos’ sexuality is presented as a non-issue and that it isn’t his defining quality, and praised the writers for focusing on his talent, dreams and “aspirations for life”.

“You can just see the strides they’re taking and the excitement while they’re doing it, you know?” he continued to say of Disney. “It’s not like, ‘We’re gonna do it once and that’s that’, they really do have our backs with this, and I’m so excited.”