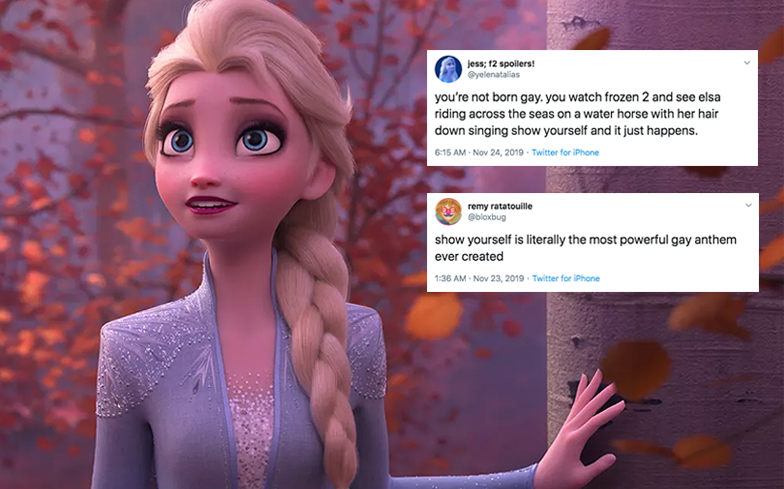 “Show Yourself is literally the most powerful gay anthem ever created.”

Six years after the first animated feature won over audiences and broke box office records around the world, Frozen 2 has arrived in cinemas. It may not have given Elsa a girlfriend, but it has given fans a queer ‘coming out’ anthem.

While the jubilant Into The Unknown is getting most of the attention, queer fans have zoned in on Show Yourself, with many dubbing it a sequel to Let It Go – the iconic song from the first movie that LGBTQ fans embraced.

“I’ve never felt so certain, all my life I’ve been torn, but I’m here for a reason, could it be the reason I was born?” the lyrics read. “I have always been so different, normal rules did not apply, is this the day, are you the way, I finally find out why?”

Unsurprisingly, fans who have long found queer subtext in the Frozen franchise have adopted the song as a new LGBTQ anthem.

“You’re not born gay. You watch Frozen 2 and see Elsa riding across the seas on a water horse with her hair down singing Show Yourself and it just happens,” wrote one Twitter user.

Another added: “Show Yourself is literally the most powerful gay anthem ever created.”

Fans have been campaigning for Elsa to have a same-sex romance ever since #GiveElsaAGirlfriend went viral. The hashtag sent the internet into meltdown mode, with fans calling on Disney to make Elsa a queer role model.

Even Idina Menzel – who voices Elsa – gave it her blessing. “I think it’s a wonderful idea. It’s a wonderful conversation that we should all have about whether a Disney princess or queen could be gay,” she said.

But according to Frozen 2 songwriter Kristen Anderson-Lopez, the writers didn’t want Elsa to be defined by a love interest. “There’s so many movies that define a woman by her romantic interest,” she told IGN. “That’s not a story that we wanted to tell.”