Did the American Horror Story: 1984 premiere live up to expectations? 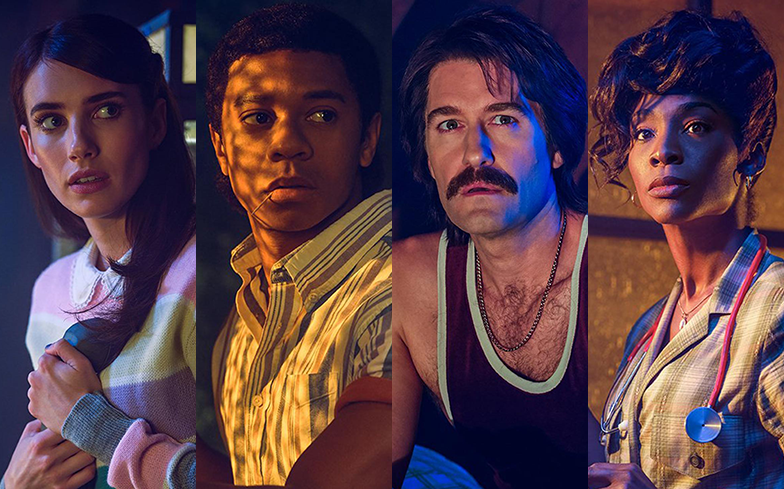 SPOILERS AHEAD! TURN AWAY NOW!

Last night saw the premiere of American Horror Story’s ninth season, 1984, the first instalment of the acclaimed horror anthology that (allegedly) doesn’t feature series mainstays Sarah Paulson and Evan Peters. So, there’s been a bit of hesitation from die-hard fans on whether it can live up to previous seasons such as Murder House, Asylum, Coven and Apocalypse.

Did it deliver? In our opinion, yes. Taking inspiration from iconic slasher films such as Sleepaway Camp, Halloween and A Nightmare on Elm Street, the season follows five attractive teens (?) who escape the wrath of a Los Angeles serial killer to become camp counsellors for a summer. Very smart! Brooke Thompson (Emma Roberts) is unsure at first, but quickly changes her mind after she’s attacked by the killer, the real life Richard Ramirez (Zach Villa), but survives after saying “no!” to death.

They stop for gas, where Xavier is told by a mysterious voice down the payphone that he’s going to be killed, and the gas attendant – like in every horror movie ever – tells them to turn around because Camp Redwood is full of danger etc. Still, they head on in their short shorts and pay tribute to I Know What You Did Last Summer by hitting a stranger with their car.

After deliberating whether to leave him or not, the group take him to the camp where he’s treated by Nurse Rita (played brilliantly by Pose star Angelica Ross). Leslie Grossman makes her debut in the episode as the camp owner, Margaret Booth, who informs the group about a massacre at the camp 14 years prior; a deranged lunatic called Mr Jingles slaughtered nine counsellors in one night, of which Margaret was the sole survivor, and took their ears as tokens. Nice!

After testifying, she had him locked up. However – because there’s always a however isn’t there? – a later scene shows Mr Jingles faking his death and escaping the asylum on the same night to travel back to Camp Redwood for its grand re-opening. There, he kills the stranger and attacks Brooke, who proves us wrong as final girl material after falling hard three times.

Alas, Brooke escapes the wrath of a psychopath once more and tells the others, who don’t believe her after the stranger’s body goes missing – what a surprise! She then settles down for bed and hears the payphone ringing outside. Instead of ignoring it, LIKE A NORMAL PERSON WHO HAS JUST BEEN ATTACKED, she ventures out into the darkness and says, “Hello? Who is this?”

She hears jingles and suddenly, from around the corner, Richard Ramirez shows his face. The end. So not only does Brooke have to deal with a legendary mass murderer, and have to convince the others that he’s actually real, but now she’s got to evade the vengeance of Richard fucking Ramirez. Poor soul, all she wanted to do this summer was study to be a vet.

Overall, the episode delivered all the camp we come to except from the show (especially in the aerobics scene in the first act) and the horror (but not as terrifying as Asylum or Roanoke). It does feel weird without Paulson and Peters, but the new talent (Ross, Horton and Kenworthy) keeps it fresh. We did expect some of the classic horror movie tropes to be subverted, like, has Chet got brains? Will Montana get offed straightaway? Is Brooke the final girl? Well, we’ve got all season.