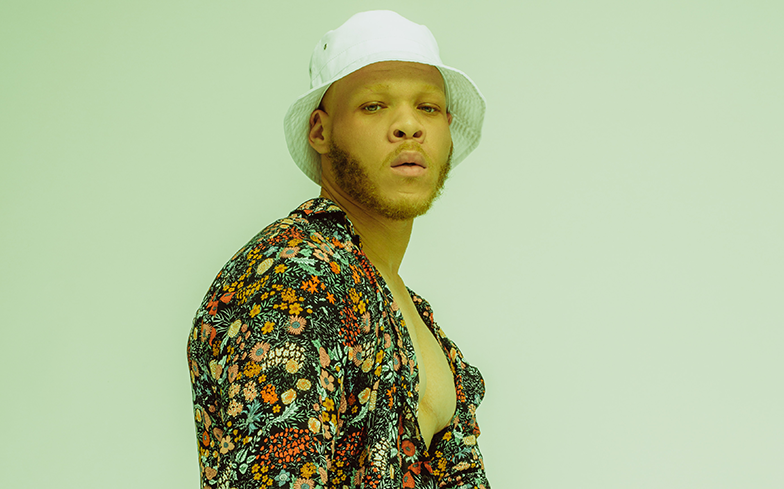 “Being albino, out and black, I hope to do a lot of great work for people who don’t see one or all three in the media.”

While the music industry has made great strides for representation over the past few years, there’s always room for improvement – and Davy Boi is hoping to be the first major pop star with albinism to break through the glass ceiling.

The LA-based performer has just released his first EP slash collection, errything so far, which includes massive dance-pop anthems such as Dirty Mind (with Dai Burger) and What U Like, as well as his new self-reflective bop, Foundations.

Due to the lack of authentic representation for people with albinism in mainstream media (Davy says they’re often portrayed as “parodies” or “props”), the star is making it his mission to shatter archaic misconceptions and stereotypes.

“Being albino, out and black, I hope to do a lot of great work for people who don’t see one or all three in the media,” he tells us. “I think it’s one of my leading forces that gets me to wake up and say, ‘You have to push yourself a little bit harder.'”

To celebrate the release of his EP – and National Albinism Awareness Day – we sat down with Davy to discuss the importance of diversity in the music industry and being a role model for queer youth.

How did you get into the world of music?
I started off doing music in the church in Louisiana. I was a playful child and my cousin told me that I couldn’t sing at all. I was like six or seven, but I’m a Sagittarius so I was very determined! As soon as that happened I was like, ‘Erm, no. I can do anything I want.’ At seven, I began taking classical vocal lessons and then from there on out, I went to art school and the Berklee College of Music. I started off doing musical theatre, I thought I was even gonna be a Broadway guy. I thought I wouldn’t get cast as a classically trained male lead – I have a great aesthetic but I don’t have that classic Broadway look. I thought I could just go behind-the-scenes in songwriting or music business, which is what I got my degree in. But then when I saw Frank Ocean post his 2012 letter to Tumblr, as a black man coming out in the music industry, and then saw Shaun Ross doing amazing work in fashion, I was just like, ‘Fuck. If this is the case and if this is the world now, hell, I can do anything.’ I then changed my focus and thought that I maybe wanted to be an artist. That’s what led to me moving to Los Angeles three years ago, to try and do the music career full time.

How was it growing up queer in Louisiana?
Well the part of Louisiana I grew up in is a little bit more liberal. But I will say the hard part was that my mom and my family were pastors – the whole thing. For me, being the eldest child and having that responsibility, and because my mom was high up in the church, I was feeling like I couldn’t come out. So I didn’t feel much pressure from the area, it was more the religious aspect of the South. My outlet for that, my go-to was boys choir and show choir, it helped with the pressure to stay closeted.

How did your family react when you came out?
Actually it’s funny because I feel like the pressure was mostly from me. I always forget that my family, despite their religion, they’re the most supportive of me. They don’t have problems with gay people – I just thought they would, and that comes from me being really down about myself for multiple things, whether that was for being stared at, being albino. They have been supportive all my life, in fact I came out to my mom with my music video for Presentation, to which she said, ‘I feel like I already knew this!’

Your new video Dirty Mind is a massive queer celebration – is it important for you to showcase diversity in your work?
I’m an intersectional person, so for me it’s really important, particularly in my work because there’s so many other pop stars and queer artists out there. I try to do colourful work, work that’s slightly dramatic because that’s who I am as a person. But also if Troye Sivan is going to do a video that features Troye Sivan’s life, I want my work and my videos to showcase queer and POC stories. I feel like I didn’t see that enough growing up, and I get comments in my DMs from people who say, ‘I appreciate you because you’re doing that.’

What message do you want to spread with your music?
You can go after anything if you have the right attitude. The new song I’ve put out, Foundation, tells the story of the last couple of years and one comment I got was, ‘I didn’t know someone from Louisiana could move to a big city and be doing so well.’ I thought that was incredible because I didn’t think so either. If you really want to do something, going back to my seven-year-old self, you just always have to say yes. I thought I couldn’t do anything because of the way I look, where I was, and my identity and the politics of it all. That wasn’t the case, it was just a mental block.

You touched upon Foundation – what’s the actual story behind the song?
I had not met up with my producer for a while and I had writer’s block for a minute. I was still working full-time and I felt like I had not done something that was fresh. Then around March, I called him over and I told him that my energy had shifted, the tide has changed in both of our careers, we had met more contacts etc. I had been pursuing all these guys and they didn’t want me back or only wanted me for particular reasons, as I covered in Dirty Mind, and then I realised I didn’t care about them anymore. It was more about me and my journey throughout the last couple of years. Every line in the song is a picture from an actual circumstance, my favourite of which is the chorus because literally every time I sing it I cry. I did think my career was going to be over. I was suffering with my anxiety and depression ready to quit, so now that I’m in a better place, the new foundation part of it is, I’ve put myself on a different footing, a total realignment.

National Albinism Awareness Day takes place this week – what do you think are the biggest misconceptions people have of those who live with albinism?
This is something I want to do throughout my career actually. I watched this Huffington Post piece they did back in January and it featured an albino model, but they were just talking about albino tropes in media. There was a lot of misinformation about how we’re blind, deformed, have a low IQ… There’s a lot of backwards thinking and misconceptions about people with albinism, and it leads to people being teased and made fun of online for no good reason. I’m not blind, I do drive a vehicle [laughs]. I went off in the comments of that video. One guy was saying how ugly people with albinism were and I told him, ‘My bone structure is better than yours!’ I’ve never commented like that in my life. I did a show at the Soho House on the 13th and spoke about raising awareness of people living with albinism. People don’t talk about it in media, and often times people with albinism in media are used as props. I love Ryan Murphy but when I saw American Horror Story for instance, the last season had Shaun Ross – who I appreciate for his albinism awareness – as a prop for the witches. There was a whole boy school of magicians and I thought, ‘Well, why were the albino guys just the security guards?’ We’re not shown as normal people. Me actively trying to do a career in pop music, I think it’s so unreal for people with albinism to see. I just think the whole misconception is that we’re limited in some way, which is not true at all. Why do you think the media struggles with authentic albinism representation?I think it goes back to people not understanding something and then trying to figure out how to spin it in a way that’s palatable or funny or a parody. People with albinism are really beautiful to look at, and so they’re used in magazines as tokens. There’s this one video by Jamie XX and they had a whole round up of albino people – the video is visually stunning by the way – but I think sometimes they just wanna throw an albino person in there. To be fair, I myself was featured in Billie Eilish’s last video for Bad Guy. My head was in a bag – which is probably one of the most shared images of the year – and I was amazed slash astonished that not one person online, and I’ve checked the comments for most of it, commented on the fact that I was albino. I think that’s great, because once people start to make it a non-thing, the better it is.

We haven’t had a major pop star with albinism. Are you hoping to be that person?
Absolutely. 100%. I couldn’t say that enough actually. In fact, in my case, I would say that there’s so many things going in music that’s so revolutionary right now. Being albino, out and black, I hope to do a lot of great work for people who don’t see one or all three in the media. I think it’s one of my leading forces that gets me to wake up and say, ‘You have to push yourself a little bit harder.’ Also I need to destigmatize the idea that it’s not possible. Shaun Ross did amazing for models with albinism and it was a huge stride for media awareness. It was revolutionary for me when he spoke to Tyra Banks on her show. I know that when somebody sees me, they’re going to feel the same way and they’re going to want to push themselves harder also.