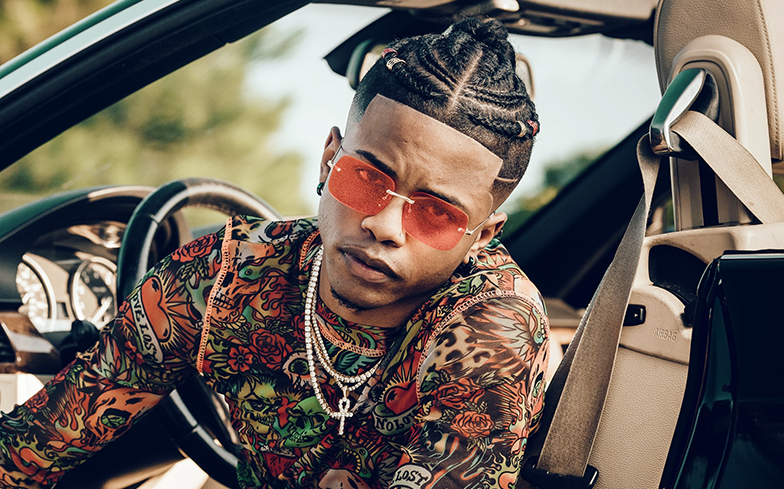 “The hip-hop community definitely had a lot of work to do, and that has actually inspired me.”

Like Lil Nas X before him, Damez is determined to break down barriers for LGBTQ artists in the hip-hop industry.

The American singer-songwriter was born and raised in Atlanta, Georgia, and although it has a reputation as one of the “gay capitals” of the United States, his upbringing wasn’t smooth. Damez says because his community was “predominantly African-American”, he felt the need to suppress his sexuality to make himself and other people feel comfortable.

“Luckily, I had my older brother. There were a lot of people that were LGBT growing up that had it a lot harder than I did, whether it was because of their parents or friends,” he tells us over the phone. “I feel like I had it easier than most people.”

After his brother tragically died from gun violence, Damez found purpose in songwriting. He was apprehensive about entering the music industry out-and-proud, due to the homophobic reputation attached to hip-hop, but ultimately decided to live authentically to “bridge the gap” and change perceptions of LGBTQ artists within the genre.

We caught up with Damez to discuss his incredible new anthem Pull Up, how his past trauma has influenced his artistry and being a role model for LGBTQ youth, especially LGBTQ youth of colour.

Have you always wanted to be a musician?
Yes I have, ever since I was a little child. I remember when I was maybe three or four years old, my cousin had gotten me a cassette of Destiny Child’s single Bills, Bills, Bills and I fell in love with the group, fell in love with music and I knew that I wanted to create music. Usher, too. He was on top of the world, he was black, he danced and he sang, and he made me feel like I could do anything.

You grew up in Atlanta, Georgia – how was that as a gay man of colour?
It was different. Atlanta on the surface is looked at as one of the gay capitals in our country, it’s really popular. However, growing up in East Atlanta and predominantly in an African-American community, it wasn’t that easy. There were a lot of times where I felt like I needed to suppress or shrink myself in order to feel comfortable and make other people comfortable. Luckily, I had my older brother who made it a lot easier for me. There were a lot of people that were LGBT growing up that had it a lot harder than I did, whether it was because of their parents or friends. I feel like I had it easier than most people. I feel it’s definitely changing. Ten years ago when I was in high school, the world and society was much harder than it is now. People are coming around and I’m so excited about that.

You’ve been through a few hardships in your life – how has that inspired your music and who you are today?
I think the biggest lesson that my hardships have taught me is that life is too short. Losing my brother at a very young age and losing my grandfather a couple years ago, I was constantly reminded that life is precious and you can’t wait around for things to happen for you. If you want something to happen, just do it. You never know how long you have here on this Earth. It’s motivated me to keep going, and it’s given me so much drive and it’s given me a purpose. I feel like I know who I am, I know what I want to accomplish. I want to have inspired and touched so many people and change lives, not only with music, but with who I am. I just try to use my hardships as motivation and inspiration to keep going.

Did you have any reservations being openly queer in a homophobic genre?
Definitely, there were reservations and apprehensiveness of… It’s one of those things that you have to decide within yourself, how bad you want it. I know for me, music is my passion and I can’t see myself doing anything else. I also understand the power in authentically being yourself, and how people can relate to that. People like real shit. People want to see the real you. I could never imagine putting myself out there and being anybody other than who I am. I feel like you have to roll with the punches and take the good with the bad. At 17-years-old, my life was spiralling out of control. I lost my brother to gun violence. My parents got divorced. By 18, I was living my whole truth. My friends knew who I was, I came out to my parents. I wasn’t living a lie. It takes some people decades before they get to that point, and I was already at that point before I started releasing music. I try not to judge people because everybody’s process is different. Everyone has different family members and friends.

As an LGBTQ artist of colour, do you feel accepted in the industry?
I definitely face challenges, especially when it comes to the hip-hop community. It’s not very welcoming to LGBTQ artists. Of course, we have just seen Lil Nas X make history, he came out after his success was already in place. It’s hard to say what would have happened if it happened the other way around. But, I mean, the hip-hop community definitely had a lot of work to do, and that has actually inspired me. I want my platform to grow enough to the point where I have a big voice in the hip-hop community and I can bridge the gap between my brothers and sisters. There’s a lot of work to do and I’m excited to do the work.

What kind of impact do you think Lil Nas has had on the queer community, especially for queer people of colour?
It was huge. It was so inspring to black LGBTQ artists and black LGBTQ youth, kids growing up and feeling alone or feeling different and had no one to relate or talk to. They now have someone who is not only a public figure, but someone who has made history. When I was growing up, I didn’t have anyone like Lil Nas X to look up to and say, ‘Hey, I can actually do that.’ I think it’s an indication of how much the world and society is evolving. I salute Lil Nas X to the fullest.

We love your new single Pull Up – what’s the story behind it?
I actually wrote that song on New Year’s Eve and I was in that little period of chilling out before the big night starts and I heard the beat and fell in love. I kept playing it over and over again. The song was inspired by Megan the Stallion’s song Stalli Freestyle. She was off on that song! I was inspired by the female rap, the charge that’s happening right now in the hip-hop industry. I remember writing in really super-fast and I recorded the song in one take. I have never done it that way. I went back and tried to re-record it, get a better take and I just couldn’t, I couldn’t match that energy. I decided to leave it how it is. I performed it at the Pride festival in Atlanta and it was my biggest crowd so far. Everyone loved it!

What else can we expect from you?
More inspiration, more good music, more dancing, more visuals… more hair!

Listen to Damez’s incredible new single Pull Up here or below.