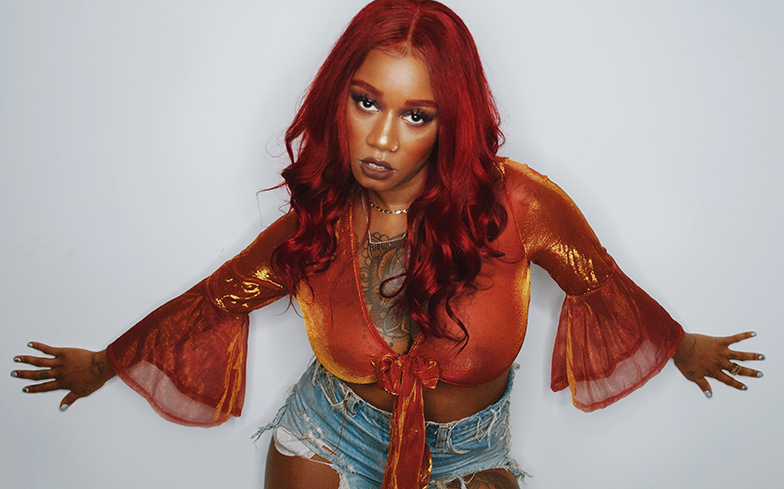 Dai Burger is here to give you a daily dose of Vitamin P.

The out and proud rapper from Queens, New York is part of a new wave of empowered female artists who aren’t afraid to get what they want and let everyone know they’re in charge – and that’s an attitude that continues on new single Vitamin P.

The Baja Frequencia-assisted bop is a ferocious, twerk-ready anthem that sees Dai rap about her “pussy power”, warning anyone that wants to challenge her: “Damn I need a license to look this good, probably be a crisis if you step in my hood.”

We spoke to Dai about queerness in hip-hop, the powerful women who have inspired her, and what we can expect from her upcoming sophomore album Bite The Burger.

First of all, what is Vitamin P and how can we get some?
You already have some! It’s that spark inside of us all; Power, Pride, Prestige! Listen to Vitamin P in the morning and get your Popping-ness charged up.

It’s a really addictive track – how did it come about?
A production duo from France named Baja Frequencia sent me this beat and I fell in love with it immediately! I started writing to it right away, and before I knew it Vitamin P was a thing. I’m glad you say addictive, I wanted it to be like a self-affirmation track.

Historically (and even still today) women have been expected to be submissive and quiet, but you’re not afraid to let everyone know you’re a boss. Why do you think having that attitude is so important?
You’re as ‘bossed up’ as you feel! It all starts with believing in yourself and the achievements will follow. If you don’t think you’re ‘THAT BITCH’ how could anyone else? You set your own standard.

Who are some powerful women who have inspired you in your career?
I’ve always looks up to trendsetters in the game such as Missy Elliott, Kelis, Gwen Stefani and pretty much any woman going against the standards in the 90s and early 2000s.

How important is it for you to be open about your queerness in hip-hop?
It is very important to me, however, it wasn’t the first thing on my agenda! My priority has always been the music and pouring all of myself and who I am into it: my personality, my sexuality, my take on life, and being a woman in the industry.

We’ve seen Lil Nas X making waves recently, but there aren’t many openly LGBTQ rap artists in the mainstream – why do you think this is?
I feel because of the stigma that comes along with it some artists are afraid to take that risk. I could never suppress who I am to appease that. I wish bravery and confidence to anyone who needs encouragement to be open about themselves.

We love seeing queer artists work together, like your song with Davy Boi. How important is it for queer people to have each others backs and support each other?
It’s an unwritten code! We have to support each other because of the lack of inclusion. I do love the shift of inclusion that we are witnessing with forthcoming artists such as Lil Nas X and Lizzo and artists unapologetically being themselves.

Are there any other artists you’d like to work with?
I’m excited to continue working with up-and-coming artists who are putting in that work and for the fearless females in the industry! Lizzo and Doja Cat are definitely at the top of my list.

What songs are dominating your playlists right now?
I’m such an old head in the music department! I’m completely stuck in the 90s, so anything TLC, Brandy, and Mariah Carey is in full rotation.

What can fans expect from your new album Bite The Burger?
They can expect to hear and see a little more depth from me as an artist. More word play, experimental visuals, and of course bring ya leggings and crop tops ’cause some serious twerking is definitely going down!

Dai Burger’s new album Bite The Burger is out 6 December.