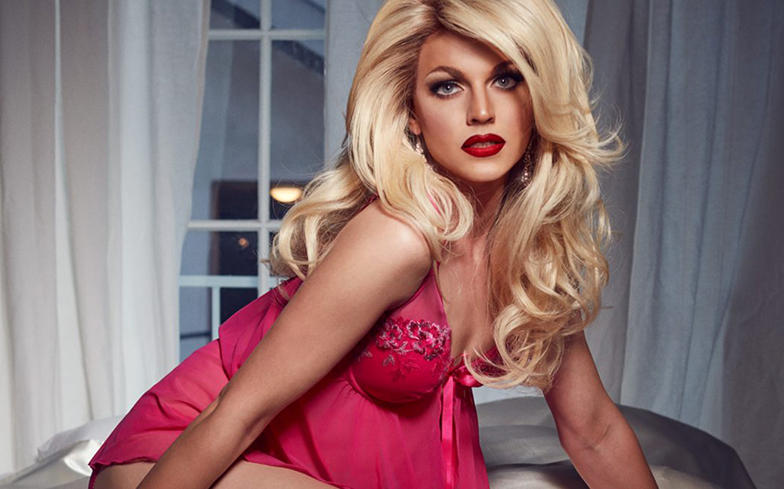 Following a successful run of shows at the Edinburgh Fringe Festival last year, Courtney Act has brought her Under The Covers show to London’s Underbelly Festival.

The premise of the show is a simple one: Courtney, the world-famous Aussie drag queen and UK Celebrity Big Brother champion, performs covers of existing cover songs in her own inimitable style – think Björk’s It’s Oh So Quiet, which she gleefully informs the audience is actually a cover of a 1948 German song called Und jetzt ist es still – as she physically gets under the covers on a stage that’s been transformed into a flatpack-able version of her bedroom. There’s a vegan-friendly version of Michael Jackson’s Beat It, a Disney-fied take on Madonna’s Like A Virgin, and a genuinely stunning cover of I Will Always Love You, which music trivia lovers will know was originally a Dolly Parton country song.

But those covers aren’t just literal, as Courtney also utilises her hour-long set to further examine her signature talking points of gender, sexuality, and identity in general. Y’know, the things that make us who we are. She compares covering other people’s music to getting into drag, shares experiences growing up as an outsider in her home country Australia, and performs a sweet duet between Courtney and her male self, Shane, via a video on a screen behind her. At times, the balance between humour and political messages becomes a little heavy – this is a drag show, after all, and most are in attendance to be entertained – but with Drag Race references and dazzling costume changes aplenty, that’s easily forgotten.

In one of the show’s most personal moments, Courtney recalls how she once questioned whether she was actually trans for wanting to present as female, but after an eye-opening conversation with friend (and son of Cher) Chaz Bono, she realised she actually identifies with gender fluidity. For a viewer who exists in a queer bubble, such concepts may feel like basic, common knowledge, but it’s important to remember that for straight audience members – of which there were surprisingly many – moments like these can help create a world of better allies.

Just as she did during her stint on Celebrity Big Brother, Courtney proved that she’s got what it takes to not only captivate the people, but also change hearts and minds in the process.

Courtney Act: Under The Covers will be at Underbelly Festival from 12-19 May. Tickets are available here.