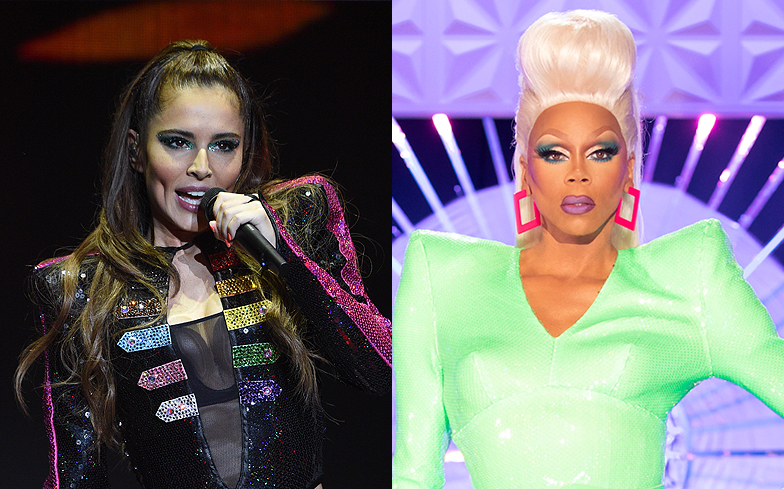 Following her triumphant performance at Manchester Pride, we sat down with Cheryl backstage in her dressing room and quickly discovered that she is a massive RuPaul’s Drag Race fan.

The British star will be a guest judge on the first series of Drag Race UK, which will air later this year.

“I just stared at Ru the whole time,” Cheryl admitted to us of her experience on set of the new series. “I was so starstruck. I don’t get starstruck easily.

“Obviously our queens are amazing, but it was the first time I’d ever met Ru and I was just in awe of him. I’m excited for it to be finally coming to the UK.”

When we started talking about her love of the show, we didn’t expect her to confess to essentially being a full-on superfan. “I’m a massive fan of the show,” she said. “Obsessed.”

We asked Cheryl who some of her favourite queens from the show so far are, to which she immediately named Alyssa Edwards and did the queen’s trademark tongue pop.

“I like the big characters,” Cheryl continued. “I actually also like the annoying ones. Silky Nutmeg Ganache was annoying, but she had some funny quips.

“I also love the very fishy ones, like Valentina. I know people have a lot to say about her, but she is stunning. She looks like a Vogue model.”

There was also plenty of love for Vanessa Vanjie Mateo, as well as recent All Stars 4 winner Monet X Change.

“Monet X Change made me die. I thought she was so funny.”

Cheryl couldn’t speak too much about what happens during the episode of RuPaul’s Drag Race UK in which she features because, well, spoilers, but she assured us the show is going to be amazing.

What’s more, Cheryl has a newfound friendship with Drag Race choreographer Todrick Hall, who has joined the panel for BBC One show The Greatest Dancer alongside her.

“I’ve been obsessed with Todrick for years,” Cheryl told us. “I then became an even bigger fan of him when I started watching Drag Race.”

Cheryl is such a fan of Todrick’s music and moves that she performed a routine to his track Nails, Hair, Hips, Heels during her set at Manchester Pride which, as expected, brought the house down.

“They called me about a week before I started filming the new series of The Greatest Dancer and said, ‘By the way we’ve got a new addition to the panel, and it’s Todrick.’ I think screamed. I actually screamed down the phone,” Cheryl admitted.

So what does Todrick bring to The Greatest Dancer?

“He brings a lot of fire. He brings everything to be honest with you,” Cheryl said. “He’s looking for different things from anyone else on the panel. He has actually attracted a different crowd to come audition, which is lovely.”

And of course, he knows just how difficult it is to pull off a high energy routine in a hair of heels. “Trust us, we’ve had those conversations!”

We couldn’t chat to Cheryl without asking when we can expect even more new music following her summer bop Let You earlier this year.

“I’m back in the studio next week, so I’m going to be doing some more writing,” she told us.

“I’m going to go into the studio with Wiley. There’s no promises, I’m just going to go in for a few days. You never know what’s going to come out.

“Sometimes it works, sometimes it doesn’t. But there’s no pressure which is nice – I prefer to write that way.”

We asked if we can expect more pop bangers, to which she replied: “Always upbeat with a big production. The more dance steps I can get in there, the happier I am – and the more people can sing along. I just want everybody to enjoy it at this point.”

Cheryl will star in an episode of RuPaul’s Drag Race UK later this year, with the series starting on BBC Three from 3 October.

The second series of The Greatest Dancer is expected to air on BBC One in early 2020.

For her set at Manchester Pride, Cheryl walked out on stage draped in a rainbow flag with the inclusive eight-stripe and trans flag colours, while a voice over recorded by the star gave an empowering message of love.

Ariana Grande, Years & Years, and Kim Petras were among the other stars the perform at Manchester Pride Live across the weekend.

The newly-built festival site played host to thousands of fans, making it the biggest Manchester Pride celebrations to date.