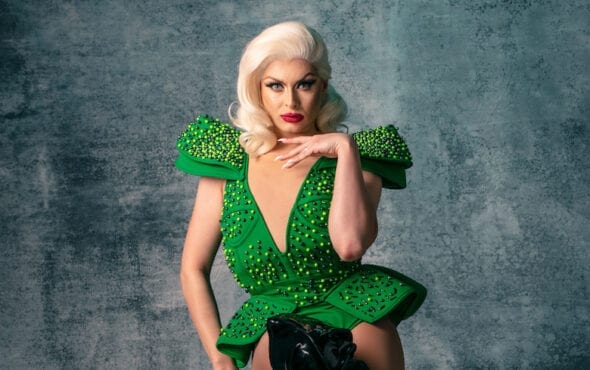 Cheryl Hole is All Fired Up with her latest project.

The drag performer, who won hearts last year with her stint on the first season of RuPaul’s Drag Race UK, has launched her very own podcast, aptly titled Girl Group Gossip, which pays tribute to some of the fiercest girl groups in history.

Each week, Cheryl will be joined by one of her best Judies – and some surprise special guests – to discuss legendary all-female collectives such as Atomic Kitten, Destiny’s Child, Little Mix, Pussycat Dolls, The Saturdays, Spice Girls, Sugababes and of course, Girls Aloud.

“I’ve always wanted to do a podcast. It’s one of those things that I’ve always enjoyed, when I’m out driving and having some company in the car!” Cheryl tells GAY TIMES.

“I think everybody knows me for my passion and knowledge of girl groups, so I thought it was inevitable and time to put my only skillset to use and educate the world on British – and some US – girl groups!

On the first episode of Girl Group Gossip, Cheryl was joined by her Drag Race sister – and Frock Destroyer icon – Blu Hydrangea, where they spilt the T on their top five favourite girl groups.

“If you only know me from Drag Race, you know the dynamic I have with Blu and how we’re just two tits and wigs that can’t shut up, so I thought that it was inevitable that I had her on the first episode,” explains Cheryl.

Their chemistry can be felt throughout the 52-minute runtime, with Cheryl hilariously criticising Blu for her lack of girl group knowledge. (Blu had never heard of Girls Aloud’s fan-favourite #11-peaking single, Untouchable, which should be a criminal offence.)

“She needs to get in the bin. I’ve already got onto her and educated her,” adds Cheryl. “I think that’s what works with the dynamic with me and Blu. It’s like cheese and chocolate, they don’t go together but they do?”

For this week’s episode, Cheryl and online personality Riyahd Khalaf will discuss the illustrious seven-year career of The Saturdays with special guest star, Molly King. Did you gag? We gagged.

“You can bet your bottom dollar that each week will be iconic,” continues Cheryl. “I feel like everybody has a got a bit of girl group love in them, so whether it’s only one episode that you can relate to, it’s going to be something that everybody latches onto.”