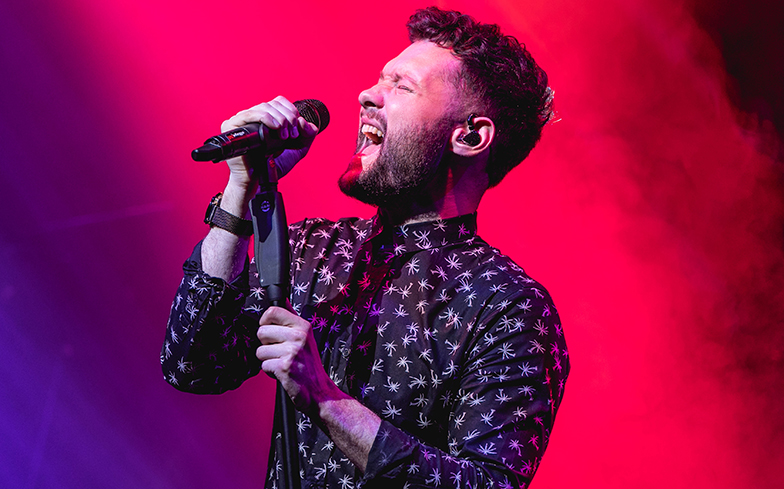 The Brit Award-nominated singer, who’s just released his debut album Only Human, kicked off the first in a series of live concerts from Gay Times at the London Hippodrome Casino on Wednesday 14 March.

Calum performed a series of songs from his new album, including Come Back Home, Give Me Something, You Are The Reason, Rhythm Inside, Hotel Room, Won’t Let You Down, What I Miss Most, as well as a cover of The Beatles’ Golden Slumbers.

The Gay Times cover star finished the show with his stunning version of Robyn’s Dancing On My Own – was there really any other option? – which shot him to fame after he performed it for the nation on Britain’s Got Talent back in 2015.

During an on-stage Q&A with Gay Times after the show, Calum opened up about his own struggles with his sexuality, and described how he channeled those emotions into If My Love Is Wrong, the first track on his new album.

“I really, really suppressed my sexuality all through my teens and most of my 20s, so I was terrified what people would think of me. A lot of people have reached out to me and said they’ve found it really difficult dealing with their sexuality too,” he said.

“When I wrote If My Love Is Wrong, it was very honest and got that off my chest, but the thought that it might inspire somebody else to come out who’s a lot younger and more vulnerable, then it makes it all worth it.”

But it seems those struggles are far behind him now, as Calum proclaimed “I’m a very, very, very proud gay man” during his set.

“There’s a lot of love in the LGBT community, and we’re not going anywhere” – @calumscott 💖 pic.twitter.com/rtQc7qdwB9

He also revealed that his favourite song to perform live from the album is You Are The Reason, which was recently released as a single with Leona Lewis, calling it a “song which celebrates love” that’s needed in the world right now.

Check out a selection of photos from the night below – and make sure you keep an eye out for our next Intimate & Live announcement! When we spoke to Calum on the set of his first ever Gay Times cover shoot last month, he revealed that Robyn had heard his cover of her iconic single – and she gave it the seal of approval.

“I met with a guy called Patrick Berger who is the other songwriter on that record, and I said, ‘I’m glad that you love this new life that’s been breathed into it, but does Robyn like it?’” he told us.

“I had reached out, but never managed to get hold of her. She did say to Patrick that she’s given the thumbs up to my version, so I was like, ‘Thank god! I can sleep easy.’

“It was finally a sigh of relief after a year and a half.”

Read our full cover story with Calum Scott in the March 2018 issue of Gay Times, which is out now.

You can also watch our pre-show Facebook Live interview with Calum below.