Bob the Drag Queen: ‘Someone out there will see me and realise they deserve a seat at the table too’ 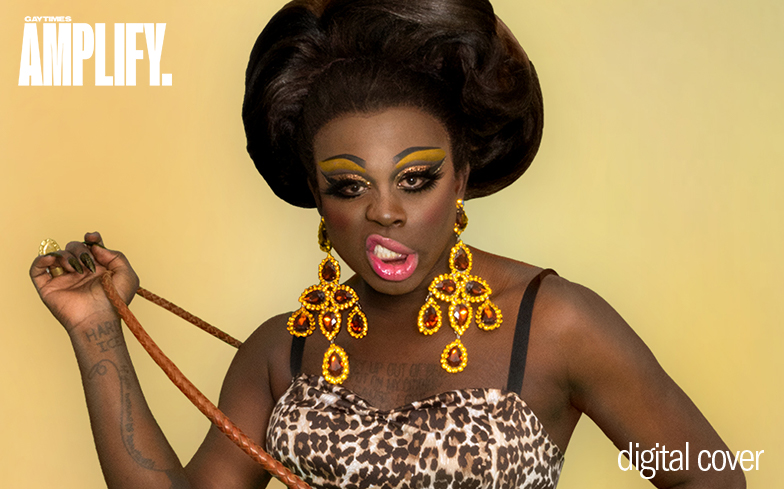 “I started playing Celebration by Kool and the Gang on the phone call,” says Bob the Drag Queen.

Condragulations are in order for the legendary comedian, as the first season of her HBO documentary series We’re Here – which she fronts alongside fellow Drag Race stars Shangela and Eureka – has just been renewed for a second season at HBO.

The six-part series, which has received universal critical acclaim, follows the three drag legends as they sashay and shantay around the United States to recruit small-town residents to participate in one-night-only drag shows, while exploring the country’s modern day attitudes towards the LGBTQ+ community.

“It’s all about people and their stories of human connection, and because we are artists, not journalists, we were honestly there to learn and share those stories. I think that is something that people really connected to,” explains Bob.

With the world’s attention firmly placed on the Black Lives Matter movement, it’s important to not only protest for racial equality, but to also see Black lives thriving on mainstream television – especially Black queer lives.

“Representation is essentially how I ended up getting into drag in the first place. I saw Bebe Zahara Benet on TV and thought, ‘Oh my god. I see someone who looks like me.’ It changed my life,” continues Bob.

“There’ll be someone out there who’s gonna see me and Shangela and think to themselves, ‘I deserve a seat at the table.'”

To celebrate the renewal of We’re Here, we caught up with Bob to discuss the groundbreaking new series, her hilarious new comedy special and how voicing support for the Black Lives Matter movement can inflict real change.

That’s me. How are you?
Like Smith? Got it. I’m pretty good. All things considered, pretty good. I like to relate people’s names to something else so I get it right. If I don’t, I’d probably call you Jan the whole time. You’d be like, ‘No. I didn’t say that.’ So I always say, ‘Oh, Sam? As in…’ and so and so.

One time someone called me Keith throughout the whole phone call…
Keith?! This is why.

Thank you for taking the time to chat with me today, especially during a pandemic and uprising.
It’s my pleasure Keith. No, I’m kidding.

You make it look so effortless…
The telling jokes part doesn’t feel like effort, but getting it together and producing… That was the hard work. Getting on stage and telling my jokes wasn’t the hard work, it was everything that led up to getting on stage.

Have you received backlash for your comments about Barbra Streisand yet?
No! Surprisingly, the Streisand fans have not come out in droves and unleashed anything against me yet. I’ve come out relatively unscathed, so I don’t want you promoting that shit [laughs]. In my defence, she really does wear some really weird stuff.

At first I thought, ‘Bob, that’s a bit harsh.’ Then I googled her looks…
I mean… Isn’t that some of the weirdest shit you’ve ever seen in your life? Oh my god.

For those who haven’t watched the special, how would you describe it?
How would I describe my special? Queer people will definitely love the special and get a lot of the humour in it. But it’s not just about that, it’s about being Black, it’s about being queer, it’s about coming from the South. A lot of people who don’t have much in common with me still find me funny and are able to relate to it. I’m really proud that it’s not a bunch of Drag Race jokes, and you don’t have to be a Drag Race fan to get the jokes.

I think one of the only times you mention Drag Race is when you compared your sweat to Latrice Royale? I loved that.
Oh yeah. A little subtle shade to my dear friend Latrice.

When you’re doing standup, is it important for you to incorporate politics?
I think that having a political point of view in your comedy can be important. In comedy, it is possible to just tell jokes that are light-hearted and about whatever, but my comedy is more political, which you see in the show. Each has their place and time.

You’re a natural on stage, which comedians have inspired you the most when it comes to commanding a live audience?
Well my favourite comedian of all time is Chris Rock. He’s just so funny, so smart. I like Wanda Sykes a lot too, she has a real point of view and her humour… A Black, queer woman up there being so profound with political humour really affected my life.

Condragulations on We’re Here season two – what was your reaction when the show was renewed?
I started playing Celebrate Good Times by Kool and the Gang on the phone call with Shangela, Eureka, Nina, the head of unscripted at HBO, and Steve and Johnnie, the show creators.

Why do you think the show resonated so well with audiences?
It’s all about people and their stories of human connection, and because we are artists, not journalists, we were honestly there to learn and share those stories. I think that is something that people really connected to.

What was it like doing this experience with Shangela and Eureka?
It was a learning experience. I have a newfound respect for both of them, quite frankly. I learned a lot from Eureka and about hard work from Shangela, and maybe they learned something about beauty from me. No, I’m kidding. But yeah, it’s really humbling in a lot of ways because we each bring something unique to the table of We’re Here.

You joke about beauty, but I think you serve some of your best looks ever on the show.
Imma tell you right now, Miss Thing. Me and my team worked so hard on this show and I’m so proud of the looks. Some of the outfits were literally all hands on deck.

I love the Sims-inspired headpiece, I think it’s my favourite Bob look.
Thank you! Oh yeah, the one from… What’s the town? That was in Branson. I did something with my makeup then, I don’t know what I did, but I haven’t been able to do it since. I was like, ‘Oh wow. I look really pretty today.’ [Laughs]

You looked amazing on your special too, and your wigline was unclockable even with the sweat!
[Laughs] Bitch! Thank you! I’m really proud to say that is a wig I completely did myself. That is a custom hairline, by yours truly. I do more than just tell jokes! I recommend everyone watch my special before you get wasted so you can check out my unclockable hairline.

We’re Here is groundbreaking because it’s fronted by three drag queens, two of which are Black, on an incredibly respected network. How important is that we have this kind of representation on mainstream TV?
It’s insanely important. Representation is essentially how I ended up getting into drag in the first place. I saw Bebe Zahara Benet on TV and thought, ‘Oh my god. I see someone who looks like me.’ It inspired me to do drag. It changed my life. The answer is: it’s really important. There’ll be someone out there who’s gonna see me and Shangela and think to themselves, ‘I deserve a seat at the table.’

You grew up in a small town, but were you surprised at all with what you learnt about America’s views to queer people, especially Black queer people?
I was surprised to see that there were queer communities in these towns, quite frankly. I’m from a small town and we didn’t have that. Actually, we probably did have them but I just didn’t know it. It was so nice to be able to see it for other people. If I saw queer people where I was from, I wouldn’t have felt the need to leave my town.

It’s Pride Month and we’re in the middle of a global pandemic – how can people feel more united in this moment, despite being physically apart?
I think there’s a lot of ways. Just because we’re not in each other’s faces doesn’t mean we can’t still… We don’t have to feel like we are literally right there with each other in order to have Pride in each other. That’s what I think anyway. You don’t actually have to be face to face. I mean, with the pandemic and the uprising happening all at once, I don’t think it’s a coincidence, you know? I think it’s telling of the time.

You recently spoke about Drag Race queens who wouldn’t post about the Black Lives Matter movement and the uprising because they were afraid of being “cancelled”. Have you seen a change in their approach since posting the video with Peppermint?
Yeah, I have seen more in regards to Black Lives Matter and the effect that it can have. I wanna remind people who feel like they’re not having an effect: the protests, the demonstrations and the online presence is what helps get four murderers put away and charged. So, to think that it doesn’t have an effect is simply not true. It is truly affecting justice.

Your video about Black Lives Matter with Peppermint was really insightful and will help educate a lot of people. At the same time, we know it shouldn’t be the responsibility of Black people to teach white people about race – how do you find the balance there?
Well… How do I find the balance? I don’t know if it is my duty, but also those videos aren’t just for white people. It’s not a thing where me and Pep decide to educate white people for whatever reason, and make them feel guilty or whatever, it’s also a chance for us… Me and Peppermint talk about these things anyway. It’s like, if we’re gonna talk about it, we’ll let people see and hear it, to not be part of the problem.

I can’t let you go without talking about Celebrity Drag Race. It was one of the most enjoyable seasons of the show – would you like to see it return for a second season?
Oh, really?! That would be great, but maybe my time with Celebrity Drag Race is done… Maybe not, who knows? It was fun, quite frankly.

Some fans even thought the celebs could participate in a regular season…
[Laughs] Well that’s fucking crazy! They had a lot of resources available to them that we don’t have available to us when you do a regular season. People think they can but there was just so much access, know what I mean? Not to discredit them, because Vanessa Williams is obviously Miss America.

Who are you rooting for on All Stars 5?​
I really love Shea Coulee and Miz Cracker, those two are both wonderful.

You’re a great lip syncer, did they… get in touch?
I certainly can’t tell you that! But I also don’t want you to think that indicates that I was… invited back. Maybe I’ll leave some mystery out there to make you think I was… What’s more fun?

Urm… mystery.
Okay, we’ll let it have an air of mystery…