Blair St. Clair on Miss Vanjie, All Stars 4, and who she wants to win Drag Race season 10 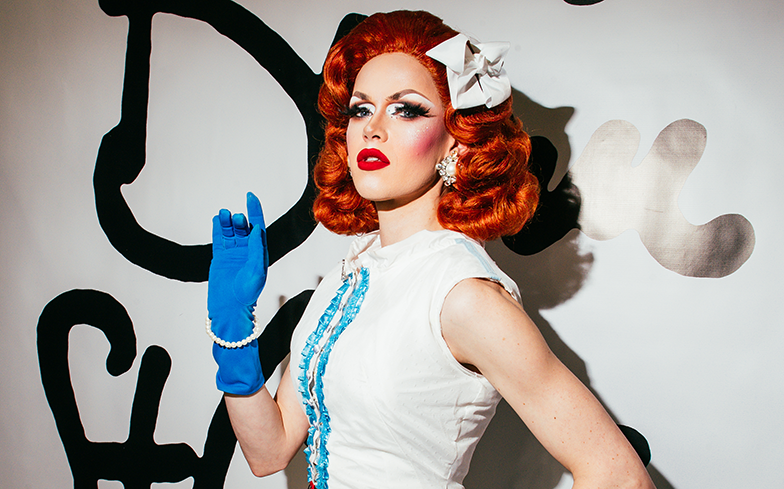 When Blair St. Clair sashayed away from RuPaul’s Drag Race last month, fans were quick to declare the Indianapolis queen a victim of the infamous “9th place curse”, which has befallen legendary contestants such as Max, Aja and Milk.

These talented queens left before their time, but made a huge mark on the show. During her final episode, Blair broke new ground for Drag Race when she opened up about her experience with rape, and was universally praised by fans and critics for opening up a discussion about sexual assault.

Since her departure, Blair has conquered the world of pop with her massive debut single, Now or Never, which – in our opinion – is one of the strongest dance anthems from a Ru queen ever. She may have not reached that coveted top three, but henny, she’s cemented her legacy as one of the most congenial and talented contestants in Drag Race HERstory.

Here, we sit down with Blair to discuss the iconic Miss Vanjie, whether she’ll appear on All Stars 4, and who she wants to win Drag Race season 10…

Can you tell us the message behind your video for Now or Never? The budget was there honey!
Let me tell you, I don’t know if the budget was there but the debt was there! The inspiration all came from my own mind. The idea for the video – and the song itself – was to coincide with one another.  That was, we as humans, as individuals, especially living in society today – even more so with gay people – we live in a grey world of our inner thoughts, of our inner workings. And we dream in colour. We are all dreaming about something wonderful that we want to happen to us, and the only way any of those dreams are gonna come true or become a reality is to actually make them happen for ourselves. It’s to metaphorically and literally take flight and make those things happen for ourselves. The time is now or never. It’s time to make your dreams a reality.

Have you got plans to release more music?
We are working on a full album right now, which we are hoping to release before – or near – the reunion episode of RuPaul’s Drag Race. That episode hasn’t been set in stone, so we’re just playing around it.

Do you know how many songs will be on the album?
At the moment, we’re working on around six. I’m really excited!

You very bravely opened up on the show about your experience with sexual assault. How did you decide to speak up?
A lot of interviewers have asked me that question, and in that moment, in that timeframe, the best way to describe the way I’m feeling is that I was feeling a mix of vulnerable emotions. That was something I’ve never talked to anyone about before Drag Race. I think it comes to a point of mental and physical exhaustion, but also, more importantly, when your heart is ready to talk before your mind has even logically known that’s what it wants. I think I was in an emotional and vulnerable state where I was trying to defend myself, and I just wanted to speak out, and my heart was just so yearning to be heard. My mind didn’t know that I was ready yet.

Have you heard much from fans who might have gone through the same thing?
I have. I tell everyone the same thing, I say: ‘You are so liberating to be able to talk about this and discuss this, and thank for you sharing your story with me and I’m so sorry that it’s happened to you too. Healing is the first process, so it might be a little hard to admit it to the world, and today it might be a little harder, but it will get better. You’re just starting the process of healing today.’

It must be amazing to go on this journey and have touched so many lives in the process.
It’s overwhelming in the most beautiful way possible, because a lot of people have turned such a negative nightmare experience of mine into something so powerful, and they just shower you with so much love in return.

Would you be interested in coming back for All Stars?
I would definitely come back! It would be silly not to come back because RuPaul’s Drag Race is such a platform and it’s an amazing adventure to go on. I’ve become much stronger and so much more grown up as a human being, and as an adult, so I would totally do another season.

Who would you like to compete against?
Interesting question! Well, who I would like to see on TV may be different to who I’d like to walk in for real in the werk room, because I’d wanna win! People who are really deserving and who I’d like to see would have to be Naomi Smalls, Mrs Kasha Davis, Miss Fame, Pearl, Valentina, Shea Coulee and Trinity Taylor.

How much impact would you say Drag Race has had on your career?
With the show being so popular, and especially with drag becoming more mainstream than it’s ever been, it’s made my career absolutely crazy. It’s amazing, and I’m so thankful to have had so many incredible opportunities, and the outpouring of the opportunities. I make sure that I keep a balance of personal time and time off, versus travelling. At the end of the day, I just turned 23 last week, so I’ve been doing this journey as a 22-year-old and I’ve been very young in the entertainment business. It’s important for me to not get burned out by 30. I want to still have a passion for it, and I know when I start to get tired or cranky, or start to resent doing drag even a little bit, that means I’m tired and I need to recharge. Every time I get into drag, I want to love every moment of it.

When Miss Vanjie was kicked off the show, did you expect her exit to become as iconic as it is?
Not at all! That first elimination is especially scary, because none of us knows what’s going on or what’s going to happen. Someone has to go through that. But, we did chuckle because it was funny, but we chuckled more because RuPaul and Michelle made fun of her accent. We didn’t think it was something to write home about, but it’s turned into such a phenomenon.

You’ve got one as well! Ru always greets you with “I do declare, it’s Blair St. Clair!”
I do! I had never heard that until day one on set. I was like, ‘Oh my gosh! I love that!’ I thought it would be stupid not to coin this phrase and to capitalise on it. It’s pretty cool.

It kinda cements your legacy in a way, to have your own RuPaul catchphrase.
It does! Oddly enough, the first time I heard it, I thought it was cute. But the second and third time I was like, ‘Oh okay… They’re setting me up to be a legacy and I feel it’s my job and duty to uphold that.’ I have it on a lot of t-shirts and hats and everytime I come to a show after I perform a number, I would talk into the audience and say ‘Hello’ followed by ‘I do declare…’ and they all go crazy!

Who, out of the remaining six queens, would you like to take home the crown?
I would love for Miz Cracker to be the season 10 winner of RuPaul’s Drag Race. To me, she embodies everything that I see in charisma, uniqueness, nerve and talent. She’s a good person, and she’s also my best friend from the show so I’m a little biased!