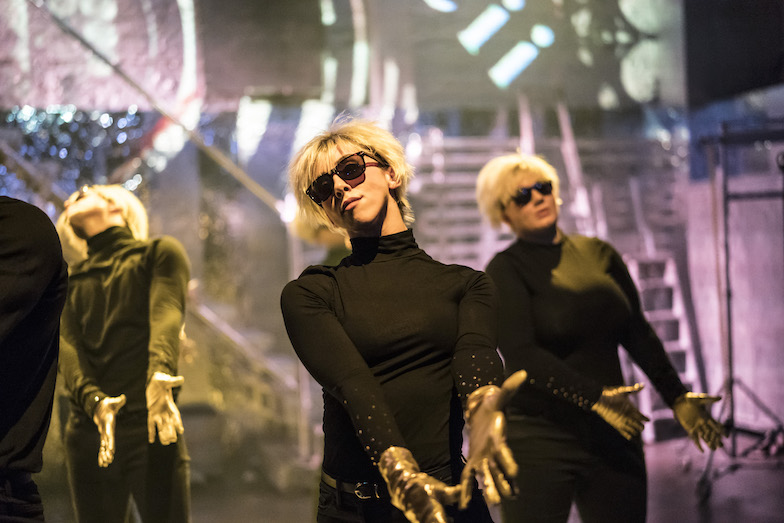 Fresh from her film directorial debut with Mary Queen of Scots, Josie Rourke directs this London revival of the classic 1960s musical set in New York.

Sweet Charity is a surprisingly epic production for a space as intimate as the Donmar Warehouse. It subscribes to the more is more, everything-including-the-kitchen-sink school of thinking, with big choreographed numbers and costume changes galore. It’s a stylish and aesthetically pleasing show – the set design draws its inspiration from Andy Warhol’s Factory – with a variety of spaces improvised on the spot, featuring some intelligent use of props and projection.

Anne-Marie Duff is utterly irresistible as the show’s impossibly-named protagonist Charity Hope Valentine. She radiates joy throughout, even though at times it’s evident that her happiness is hard won. Her story is not a happy one; she has spent the last eight years working as a dance hall hostess, which is less about dancing and more about “defending herself to music”. Over the course of the play we see her looking for a way out, alongside numerous unlucky in love encounters.

Yet her unbridled optimism that things will get better is a joy to watch. Sporting a top hat and cane it’s difficult not to crack a smile as she powers through a rendition of If My Friends Could See Me Now. Her raw emotion is palpable when plans start to unravel, but it’s a pleasure to see her pick herself up again. Duff may not have the most technically proficient singing voice, but her husky tones are eminently listenable, and there’s some impressive vocal talent in the ensemble cast. The band sounds great, too.

A variety of guest stars play the role of Daddy Brubeck over the course of the run. On press night we were treated to an impressive turn from Adrian Lester; the next few weeks will see Le Gateau Chocolat and Beverley Knight, amongst others, taking on the role. It’s an impressive set-piece within the performance and we’re sure each artist will bring something unique to this moment.

We were really quite taken with Sweet Charity. It has a genuine, infectious energy to it – while occasionally it veers over into too-busy territory, for the most part it works very well, and it’s impossible not to like Anne-Marie Duff’s performance.