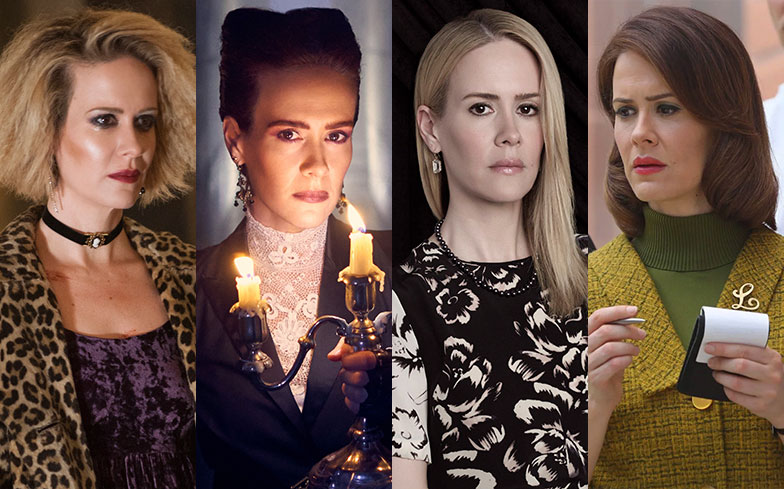 Lana Winters? Cordelia Goode? Bette and Dot? It’s almost impossible to choose… but we did anyway.

Throughout American Horror Story’s history, Sarah Paulson has been the glue that binds the show together. Alongside fellow fan favourite Evan Peters, she’s appeared in all seasons of the show, and every character she portrays is a delight to watch.

After making a relatively small appearance in the show’s OG season, Murder House, Sarah’s excellence was quickly acknowledged and the talented actor was upgraded to play the lead in the utterly terrifying second season, Asylum.

Since then, she’s gone on to play a total of 11 iconic and varied characters, including psychic Bilie Dean Howard in Murder House, head witch Cordelia Goode in Coven, and even conjoined twins Bette and Dot in Freak Show.

As the latest season, Apocalypse, draws to a close, we’ve decided to revisit all of Sarah’s characters on American Horror Story and rank them. So, without further ado… Most iconic quote: “I am done telling myself to calm down, that I am damaged, crazy. I am not crazy and I am not weak. You people are terrorising my family, and it stops now!”

By the end of season seven, Cult, Ally Mayfair-Richards was a force to be reckoned with, there’s no denying it. But she was also one of the least likeable characters to come out of the show. Meant to represent the ‘triggered’ liberal, her many fears including trypophobia and coulrophobia, which begin to flare up after the election of US President Donald Trump. Sarah’s performance was great as ever, and seeing her overcome her anxieties to protect her son was a great story arc, but the character of Ally relied a little too heavily on stereotypes. It didn’t help that the season was one of the least enjoyable so far. Sarah proved her ‘scream queen’ status when she played the fictional version of Shelby Miller in season six, Ronaoke. Like many of her characters, Shelby endured some pretty horrific situations, but always managed to hold her own against the supernatural forces out to get her and her family. We lost count of how many times she shouted for her husband Matt, but there’s a pretty great compilation here. Most iconic quote: “Oh, woman, I have no mercy for you.”

It may have been her smallest role on the show to date, but Sarah put in a scarily good performance as real-life murderer Susan Atkins, who appeared in a flashback during season seven, Cult. Susan was a member of Charles Manson’s band of followers known as the ‘Manson Family’ who were responsible for a number of high-profile murders and assaults during the 1960s. This particular flashback focused on their most notorious crime; the murders of Roman Polanski and Sharon Tate in their family home. Susan stabbing a heavily-pregnant Sharon was one of the most difficult scenes to watch in American Horror Story history, so props to Sarah for having the stomach to go through with that. We’d love to see her revisit the character in a future season. If anyone could play both parts of conjoined twins, it’s Sarah Paulson. Bette and Dot were recruited by Elsa Mars as new members of her troupe of performers in season four, Freak Show, and despite their identical appearance, their personalities are wildly different. Bette is the friendly, naive sister who craves the bright lights of show business; a different shade from Sarah’s typically cold, strong-willed characters. She becomes jealous of her sister when her singing ability makes her a star at the freak show, and is encouraged to kill her by Elsa, although she never goes through with it. She shows development when, after her sister Dot falls in love, she says she will “look the other way” so she can be happy. Most iconic quote: “I knew I was about to enter the gates of Hell. But like the inescapable pull of gravity, there was nothing I could do about it.”

Unlike her sister, Dot had a very cynical view of the world, and longed for a sheltered life of safety and routine. Throughout the season, her outlook on life began to change, largely due to her love for fellow freak show member Jimmy Darling. We’d never want to separate the twins, but if one has to come out on top, it’s Dot and her snarky realism. Both sisters showed character development and were fun watch, but they pale slightly when compared to Sarah’s other roles in the American Horror Story universe. Fun fact: Sarah had to film each scene twice, wearing a prosthetic of the twin she wasn’t playing at the time. These were later edited together with CGI. Most iconic quote: “Nothing would be more humiliating to a man such as yourself than to learn that a woman had more information than he did.”

The newest addition to this list, Venable was a cold-hearted ruler with a penchant for sadomasochism and killing innocent people. While we appreciated her role as a strong independent leader, we weren’t massive fans of how she treated the survivors in Outpost 3, which culminated in killing them all off with poison apples. Her genuine belief that she was changing the world for good, in her own twisted mould, was very unnerving to watch. She came to a just end at the hands of her loyal sidekick, Miriam Mead, but we almost wish she’d stuck around for longer. Most iconic quote: “The Holy Ghost merely whispered in the Virgin Mary’s ear and she begat the son of God. If the Devil’s going to use a human womb for his spawn, he’s going to want a little more bang for his buck.”

She’s a psychic to the stars with her own Lifetime show, but you can find her on Craigslist. Billie Dean Howard was Sarah’s first character in American Horror Story, and she commanded attention from the moment she appeared. Described as a “gifted medium” by Jessica Lange’s Constance Langdon, she predicted the appearance of the anti-christ and the end of the world that we’re currently witnessing several seasons later in Apocalypse, so we’re inclined to believe in her psychic abilities. She’s made an appearance in three seasons now, so there’s clearly something special about her; we wouldn’t be surprised if we see more of her in the future. Most iconic quote: “Oh my God! Poor Shelby! I feel like a part of me has died with her!”

Sure, she may not have had much impact on the overall American Horror Story universe, but Audrey Tindall was a blast to watch. She was one of the most (unintentionally) funny characters on the show, and despite how repetitive it became, we never tired of her screaming, ‘Oh my god’ in her brilliant British accent. Audrey taking on the violent Polk family alongside Angela Bassett’s Monet Tumusiime was one of the most terrifying moments we’ve ever witnessed on our screens, and we loved every second of it. Most iconic quote: “Getting high used to be like how you imagine heaven. Pure light. The perfection of it all. Even in me. Then I got lost. Kept trying to climb higher. Get closer to that light. Like an endless ladder where all you do is get further and further away.”

It’s a testament to Sarah Paulson’s acting ability that she can play a character so far removed from her other roles, and do it so damn well. Sally McKenna, known as Hypodermic Sally, is a ghost who died at the Hotel Cortez in 1994 and has been a permanent resident ever since. She was a drug dealer, a heroin addict, and had major abandonment issues. Talk about layers. Up until this point, all of Sarah’s characters had been fundamentally good people, so seeing her sink her teeth into someone entirely lacking a moral compass was a rare treat. Hotel may not be the most loved season of American Horror Story, but as always, Sarah’s performance was a standout. Most iconic quote: “I am tough, but I am no cookie.”

Sarah got her chance to take on the lead role in the show’s second season, Asylum, and boy did she deliver. In a performance of a lifetime, Sarah portrayed Lana Winters, a strong-willed journalist who is wrongly committed to Briarcliff Manor asylum for trying to expose the mistreatment and torture that occurs there. She’s one of the strongest characters to come out of the show; not only is she working in a male-dominated field in the mid-60s, she’s also a lesbian, and has to hide her relationship for fear of repercussion. She suffered kidnap, rape, had to kill her own son, and yet she never gave in to her oppressors. It’s no surprise that she’s a favourite among LGBTQ viewers. Lana reappeared at the end of season six, Roanoke, and we’re keeping our fingers crossed that we see her again in the future. Most iconic quote: “Because I’m the fucking supreme.”

In our ranking of Jessica Lange’s characters from American Horror Story, we placed Fiona Goode at number one, calling her the best character from the show’s history. If anyone could challenge that title, it’s her daughter – and reigning supreme – Cordelia Goode. She first appeared in Coven, one of the show’s most divisive seasons; some loved the camp, Mean Girls-style humour while others lamented its lack of true horror. The one thing that united everyone, though, was that Cordelia was a pure-hearted bad-ass. Remember that time she stabbed herself in the eyes so she could get her visions back and protect the coven? Iconic. You only need to look at the fan reaction to her comeback in Apocalypse to understand how beloved she is. She also took on the anti-christ and helped save the world, which is pretty damn cool.