All About Eve a stylish and enthralling cinematic experience – review 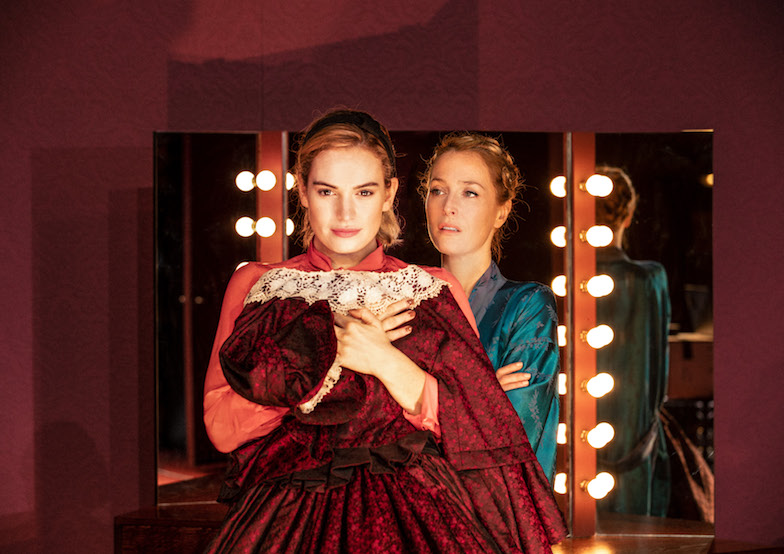 This adaptation of All About Eve is based on the 1950 Oscar-winning film of the same name – itself inspired by the play The Wisdom of Eve by Mary Orr. It tells the story of stage legend Margo Channing (Gillian Anderson), a true star of the theatre who has been at the top of her game for years. Eve Harrington (Lily James), an obsessive fan who knocks on the stage door one night, lands a job as Margo’s assistant; but all is not as it seems, as Eve’s ulterior motives unfurl over the subsequent two hours.

At the heart of All About Eve is a great story. Set in a world of ambition, deception and jealousy, the power struggle between the two leading ladies unfolds dramatically, with unpredictable yet believable twists and turns. Along the way a number of issues are explored, including ageing and identity, both examined particularly effectively from Margo’s perspective. Anderson delivers a captivating insight into the life of a woman struggling to come to terms with the fact she isn’t who she used to be.

While both Anderson and James turned in commendable performances, we also appreciated BAFTA-winner Monica Dolan, in the dual roles of Margo’s friend Karen and the play’s narrator. Throughout the show she delivered a wonderfully balanced performance, bringing sensitive diplomacy and tension-breaking comedy to the stage as required.

The production values were, unsurprisingly, very high – we won’t spoil all the gimmicks here, but the use of video and projection to tell the story is utilised throughout. The quality of the cinematography was superb, and there were a handful of visually-striking – and unexpected – special effects, which genuinely impressed.

However, we did feel that some of the visual trickery was over-used. There were too many important moments delivered off-stage being relayed to the audience via the camera; more often that we’d have liked, we felt a bit of a disconnect between the audience and what was happening on-stage. It doesn’t spoil proceedings, but a number of key moments felt lacking in dramatic tension as a result.

Having said that, All About Eve is a play which succeeds far more often than it fails; it’s an ambitious and intelligent play, featuring a handful of great set pieces and memorable one-liners. It may not get everything right, but it mostly succeeds in delivering a stylish and enthralling cinematic experience.