Alaska & Jeremy on aliens and their ‘genderqueer hippie’ debut album 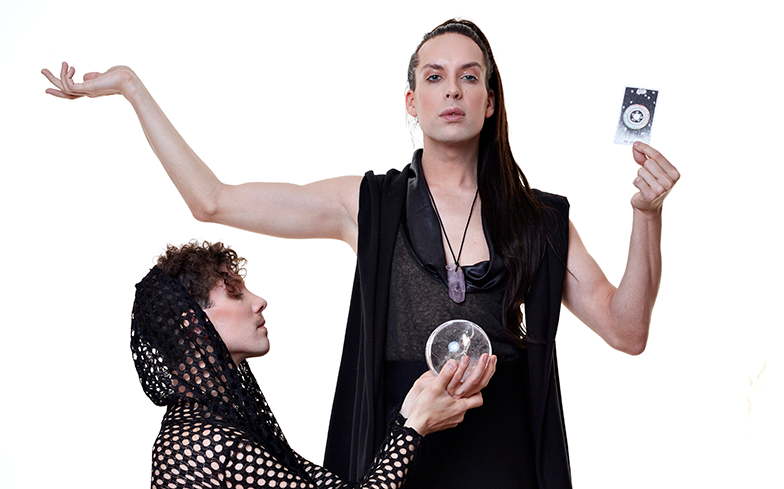 Ever since Alaska Thunderfuck appeared on the fifth season of RuPaul’s Drag Race, she’s become one of the most popular drag performers in the music industry (and the most streamed). With electropop-bops such as Come to Brazil, Stun and the iconique classic, Your Makeup Is Terrible, the All Stars 2 winner has shown off her comedic chops and unique ability to craft otherworldly pop music.

Her ambitious new project, Amethyst Journey – a collaboration with her long-time musical partner and bff, Jeremy Mikush – takes the ‘otherworldly’ part up a notch, and has been described by fans as a ‘genderqueer hippie’ record, a label Jeremy loves. “I’m really loving coming out more and more as a magical rainbow creature!” he tells us.

Because it’s a far cry from her Anus days, the All Stars 2 winner admits she was “afraid” to share her new musical endeavour with fans. “I have fear of exposing myself or being vulnerable. Also, I know as an artist, it’s kind of our jobs to push ourselves beyond what feels safe or what feels normal or predictable.”

We caught up with the duo and discussed Alaska’s brand new direction, Jeremy embracing his inner “queer hippie witch” in the woods, and why an alien invasion would “stunt” Earth’s adolescent years. Enjoy!

Jeremy: Yup that’s me! It’s an ode to the cover of Rumours.

Your first single is called Aliens. Do you believe they exist?

Alaska: I think the song is asking that question. I think for people who have had experiences with them, that yeah, they do exist. If there is a species out there, we all still have life force flowing through us. I mean, they may look different or live in a different place, but that doesn’t mean we’re not all the same.

Jeremy: Yeah, I agree. I enjoy what people call, in definite scare quotes, ‘conspiracy theories’. I believe that everything is a little true, or else it wouldn’t get spread around.

If they were to make themselves known, would they be more Independence Day or more Arrival?

Alaska: I think they wouldn’t wanna get anywhere near us. I think that if they were observing what is going on on the planet right now, they’d say, “They have a little growing up to do, and if we were to interfere, that might stunt their growth”. So I feel like Earth is in its adolescent years, and we have to figure out how to walk and do it on our own.

Jeremy: I think that it’s wonderful that Alaska is talking about Earth and its adolescence. I feel that it’s a very Star Trek: Next Generation scenario, where we’re all under quarantine and both wonderful and terrible beings, who in some universal way, who we may or may not be related to somehow, know that it would be best not to interfere with us. Do we interfere with an infant learning to walk, falling down, or talking? Do you interfere in an adolescent teenager’s ups and downs? What would you do if you were an advanced being who saw people blowing each other up, and still blaming each other and their divinities for things that have happened for thousands of years?

This album came about because you both retreated into the woods. Can you tell me about that?

Alaska: Jeremy and I have been making music together for years. We thought to go into the woods, and we went way past where the cell service was, way past reach for our phone network, and we went out there with the intention of writing music. We came up with some really great stuff, and then it was born!

Jeremy: Yeah. I love it when Alaska sends me these snippets of lyrics whenever they come! I get so excited and head right to the piano and lay some sort of rough demo down. It was definitely that way with So Far Gone and Aliens. I just love when song ideas happen to her!

During your time in the woods, did anything life-changing or profound occur that may have influenced or affected the album?

Jeremy: They usually caught me in the morning like some full-blown queer hippie witch, barefoot in this beautiful stream that was really frickin’ cold because it was March and the snow was melting. I’d be out there, sitting by these little waterfalls, playing music that I could barely hear on my ukulele, and it was one of the most healing things I had experienced in a long time. Our friend Nick was there with us, and he’d often catch me acting like a witch.

Alaska: I also wanna mention the crystals, because we got these really great crystals, that had sort of come along with us on this journey, with our music and the writing process. I mean, crystals had always been a part of my life but I didn’t really know what that meant. I got these beautiful amethysts from my great grandmother, and I always had them in my drawer, under my desk where I would do all my drawings as a child, so they’ve always been a part of me. So we got a few amethysts, we got ourselves a crystal ball, and they’re featured in the album art, which was photographed by Magnus Hastings. And one of these amethyst necklaces doesn’t wanna be any part of it! Or, she doesn’t wanna be around us. I don’t know what her problem is. As soon as I brought them home, she flung herself on the ground. Then I hang her up in the hallway, and literally within hours it crashed to the ground. So I’m like, ‘Okay, this young lady does not wanna be around’. And then, wouldn’t you know it, we did the music video for Aliens, and wouldn’t you know it, she gets left behind, and she’s still there, she’s still at the studio. She obviously needs to check herself. They have personalities!

The album is really personal. Were you both ever worried about revealing so much of yourselves?

Alaska: I felt like it was different than any music I’ve put out there before, so I was afraid. I have fear of exposing myself or being vulnerable. Also, I know as an artist, it’s kind of our jobs to push ourselves beyond what feels safe or what feels normal or predictable.

Jeremy: As someone who has been with Alaska for years, I was concerned about the change in the genre and perspective. At points, I have thought “Is this gonna come out of left field and alienate her audience?”. But because of traveling with Alaska, and having friends, lovers, chosen family who are at the forefront of LGBTQ culture and we are having these conversations; and because I’ve had such lovely responses from everyone who’s sent me messages and congratulations, I am not concerned about negative responses. Those who love us will continue to support us and love us in this Amethyst Journey.

Your music has been called ‘genderqueer hippie’. Do you find there’s still stigma towards music that sounds gay?

Alaska: I’m writing and creating and living from a queer experience, so I want my music to reflect that. And I want to listen to music that speaks to that. If there’s a stigma for some people, then it’s just not for them.

Jeremy: I am that queen! And so proud of it! Gender-variant and relationship-diverse people are powerful, magical, and we have had millennia of unique experiences that help to bridge communities and heal deep collective wounds. I’m proud of that label for whatever it means, and if some of these queens don’t wanna extend their genderqueer hippie feels outside of Burning Man, Rainbow Gathering, or campout, my condolences. I’m really loving coming out more and more as a magical rainbow creature! You’ve both known each other for over a decade. What is the biggest change you’ve seen in each other over the years?

Jeremy: I’m so so so so proud of my sister Justin and the powerful being Justin has created, Alaska, who has inspired millions of people. And this stalwart chosen sister of mine is hard-working, gracious, patient, generous, and manages to not become the ego monster that’s always a temptation with the spotlight on you. This is a magical being who creates visual and sonic art; who lifts up her families; and who is, like me, joyful at heart. Justin is my heart sister, and it’s just such a mind-blowing blessing and the grace of the universe that we have brought this album-baby to life. I love her so much!

Alaska: I’m really grateful to have someone like Jeremy in my life and in the world. It’s very easy for sensitive people to become jaded or bitter, but he is vigilant in staying positive and hopeful and centered. In the past few years I’ve seen him grow into himself as an independent person and as an artist and that makes me proud.

You both said you’d like to go on the road next year. What can fans expect from a tour?

Alaska: We want it to be an immersive experience. I hope there’s some tenderness and some vulnerability and some feelings had by everyone.

Jeremy: I absolutely agree. I want to catch up on my computer-music program skills, learn to make as much of our music live, bring other visual/performative aspects, and support other artists whose visions of a heart-based queer community manifest! Maybe we can take a van and do a lo-fi documentary if we can handle all that extra. No promises. I want my voice and performance to heal and help empower folks to connect and be the change the world needs so badly.