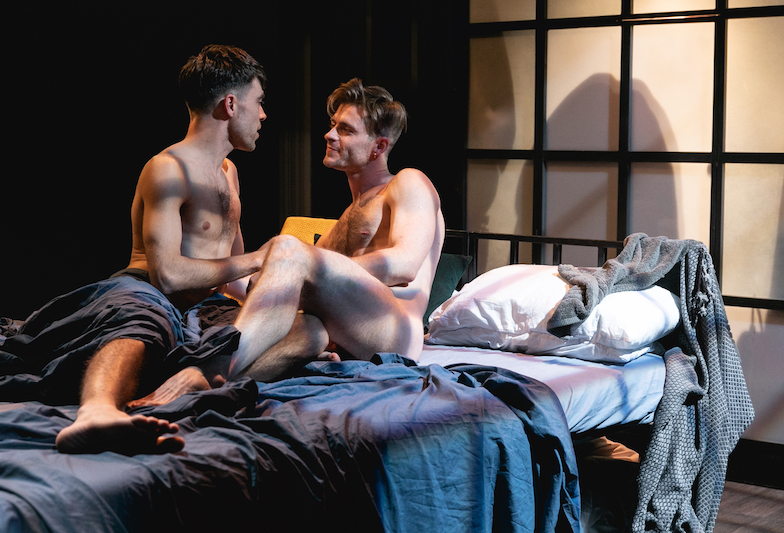 Set in Manhattan, Afterglow tells the story of Alex (Danny Mahoney) and Josh (Sean Hart), a married couple who are in an open relationship. The first scene sees the husbands in bed with a young masseur, Darius (Jesse Fox); having enjoyed this encounter, Alex and Josh agree that Darius can become a regular guest to grace their bed. Things begin to unravel as Darius and Josh develop deep feelings for each other and their relationship becomes more than just sex. All is laid bare – literally – over the ensuing hour and a half.

It’s a stripped-down look at polyamory which explores the intricacies of modern gay relationships. Alex and Josh seemingly have everything – they both appear comfortable with their arrangement, they have a nice apartment and a baby on the way. Yet beneath this perfect veneer it becomes apparent that both men have different requirements from their relationship, whether that be in terms of sex or affection; the play considers how one person’s actions can impact on the other if they seek to satisfy these needs elsewhere.

It makes some interesting observations. In one particularly candid moment, Darius talks about the illusion of choice, saying the options often result in paralysis – that the ability to access anything at any time, and change plans at any moment, has led to people seldom committing to anything. It poses the idea that in a world of endless choice, people will never be completely satisfied with whoever they choose. Amusingly, he pines for the days when being online meant physically sitting at a computer – back then, people would at least commit to a plan, if only for an evening.

In a subtle nod towards the gay community’s obsession with youth, Josh – who is old enough to remember the days of the internet only being on computers – is portrayed as having something of a mid-life crisis, even though he’s barely approaching his mid-30s.

The quality of the acting impresses throughout, with believable performances from the three actors. Gelman has written a trio of interesting and relatable characters – while the focus may be on a gay relationship, many of the themes and challenges posed are universal, whether that be establishing the rules of a relationship or the impact that jealousy can have, especially when an issue is not confronted.

Afterglow is a thought-provoking new play which tackles some topical issues. At 90-minutes straight through it’s an eminently watchable, fast-paced and compelling piece of theatre – one that’s well worth checking out.