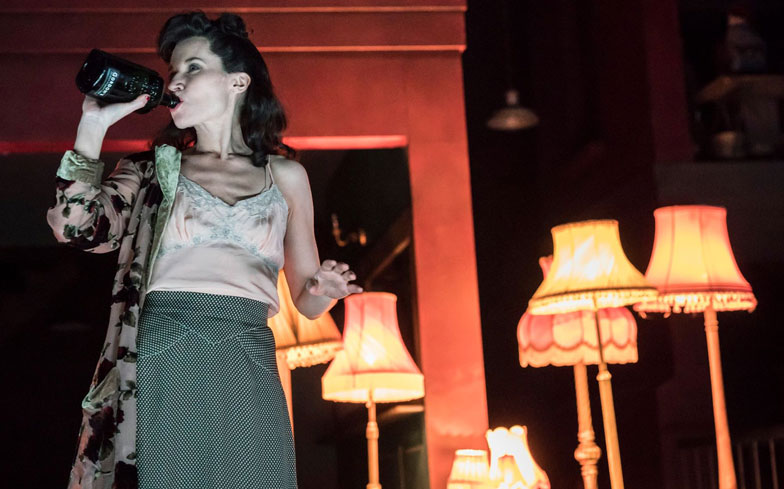 The negative reviews that have greeted this revival of Rodney Ackland’s troubled play are baffling.

I say ‘troubled’ because the original 1952 production, under the title of The Pink Room, was savaged by critics and closed after just three weeks. It seems that even though its depiction of drunken debauchery in certain sectors of early-50s Britain was an accurate one, the public preferred to keep it behind the closed doors of Soho members’ clubs like the one Ackland set it in rather than having it paraded on stage.

The scolded playwright pretty much turned his back on the theatre until, down on his luck and suffering from leukaemia, he reworked The Pink Room as Absolute Hell in the post-censorship 80s. Its subsequent 1998 revival in Richmond was well received, as were a television version starring Judi Dench and a National Theatre production with Dench again in the lead.

Coming soon after the 50th anniversary of the partial decriminalisation of homosexuality in Britain, this latest revival couldn’t be more timely and – other reviewers be damned! – couldn’t be better staged. Director Joe Hill-Gibbins gets the tragi-comic tone just right as he miraculously marshals a 30-plus cast around Lizzie Clachan’s marvel of a set, which envisions the La Vie En Rose club as a slightly-battered booze emporium where there’s all sorts of mischief going on in dimly-lit nooks and crannies.

Centre stage, meanwhile, is manager Christine Foskett, brilliantly played by Kate Fleetwood as a sort of indomitable 1950s Angie Watts by way of Katharine Hepburn, and flailing writer Hugh Marriner, a gay man who feels free to express his sexuality in a safe space where pretty much anything goes although his relationship with another man is challenged by the repressive society that exists outside the cosy club’s four walls and crumbling ceiling.

Ackland hinted at Marriner’s sexuality in the first version and made it explicit in the rewrite, and Charles Edwards is wonderfully warm and worrisome in the role – a man referred to as “one of those” who seems quite happy being so even though his career and love life aren’t really working out. He’s friends with, but much more reserved than, movie mogul Maurice Hussey, played by Jonathan Slinger as a hilarious whirlwind of witticisms and put-downs as he leches after younger men and verbally abuses his secretary Cyril (Esh Alladi camping it up a treat).

Running at three hours, including an interval and a quick scene change, it’s a little too long and sometimes loses dramatic focus as it tries to tell too many stories. But then pruning this bold and brash epic down further might mean losing such delicious supporting characters as Lettice Willis aka The Treacle Queen, a bored socialite whose drunkenness is so well conveyed by Liza Sadovy you’d swear she was half-cut, and the bonkers Bible-bashing Madge (Eileen Walsh) who is adamant Jesus was born on Boxing Day and exhorts everyone to “Keep The Bible British”.

It also makes you mournful for a pre-sanitised Soho where being gay might have been more dangerous but it was also, in safe spaces amongst friends, a lot more fun.