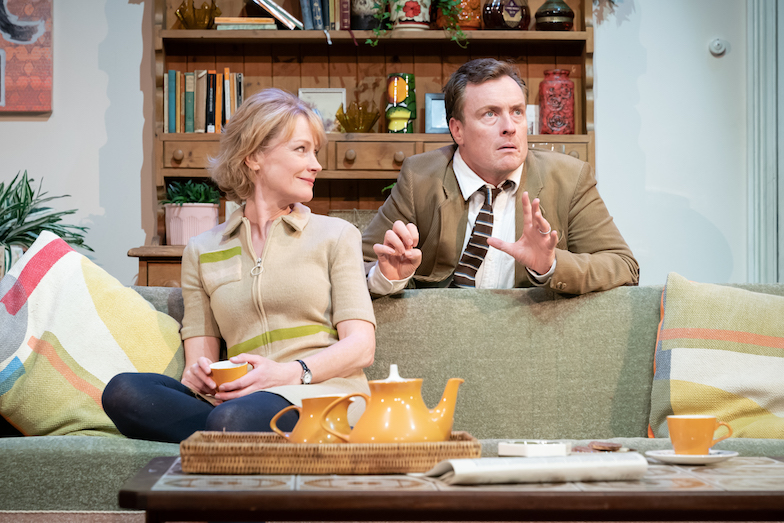 Playwright Peter Nichols passed away last month aged 92, so reviving one of his most important works feels like a fitting tribute. Groundbreaking when it was first staged back in 1967, A Day in the Death of Joe Egg is partly inspired by his own experience of raising a disabled child and the impact this had on his marriage. Importantly this production also marks the first West End staging of this play featuring a disabled actor in the title role – Joe is played by Storme Toolis, who has cerebral palsy.

It brings together an impressively big-name cast in the intimate setting of the Trafalgar Studios. Claire Skinner and Toby Stephens play Sheila and Bri, Joe’s parents, while Patricia Hodge delivers a savagely funny cameo role towards the show’s conclusion as Bri’s meddling mother Grace. Sheila and Bri are very different in their handling of the situation – Sheila’s beacon of tenderness and hopefulness contrasts sharply with Bri’s employment of increasingly twisted and dark jokes as a coping mechanism.

This is a show which requires a very fine balance to be struck between the dark and the comedy and we didn’t feel it always got it right. While undoubtedly this was a cutting edge piece when first staged, this new staging sometimes felt like it could have gone a lot further with exploring the issues relating to such a sensitive topic. Bri’s attempts to turn every issue into a joke meant there were regular laughs, but also limited our insight into the characters’ genuine thoughts and feelings.

There’s still plenty here to enjoy. The 1960s setting is beautifully realised – Peter McKintosh’s set and costume design really evokes the era. The quality of the acting mostly impressed, although we didn’t buy into Sheila’s back story; of all the adult characters, she seemed the most virtuous and least likely to have the questionable past that was frequently alluded to.

We thought it important to note that during our performance there was an unpredictable moment which the actors handled superbly. An audience member near the front was taken ill – once the actors had ensured she was ok and being given the help she needed, they gradually segued back into their scene with some improvised lines which actually provided some of the night’s biggest laughs.

A Day in the Death of Joe Egg is an enjoyable play with some impressive performances. At times it’s heartbreaking, and although there is some comic relief, it’s of the very dark and twisted variety – so this isn’t a show for those seeking a feel-good night out. It offers an interesting insight into the lives of those impacted by disability – and while our knowledge of, and the way we talk about, disabilities may have changed over the last 50 years, the challenges they present remain the same. An intriguing show which definitely provides some food for thought.