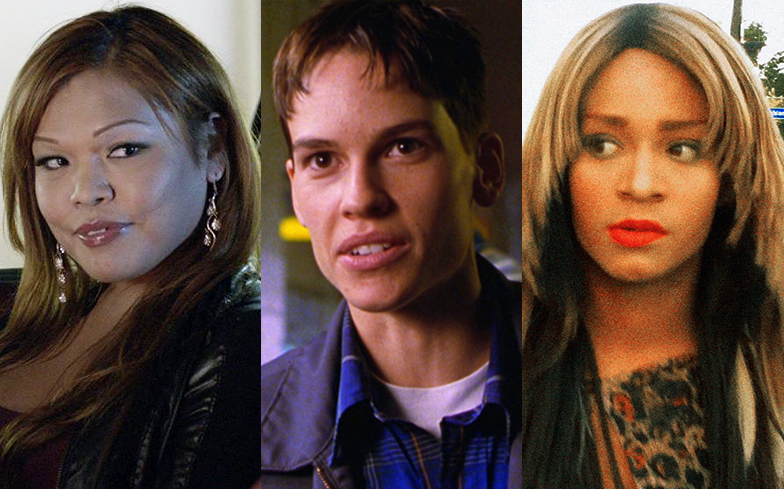 Everyone deserves to see themselves represented on the big screen.

While films like Call Me By Your Name, Moonlight and Carol have slowly been bringing the lives of gay people to the mainstream, there’s still a severe lack of stories focusing on the experiences of trans and gender non-conforming individuals.

We’re keeping our fingers crossed that more are on the way, but in the meantime we’ve been on the hunt for some of the best that already exist, including critical successes, personal favourites and underrated gems you may not have heard of before.

See how many you’ve watched below, and be sure to let us know if we missed your favourite off our list. Chilean drama A Fantastic Woman won Best Foreign Language Film at the 90th Academy Awards, and for good reason. The film follows young trans woman Marina – played expertly by Daniela Vega – who’s working as a singer and waitress in Santiago when her older boyfriend Orlando dies unexpectedly. The subsequent events highlighted the struggles of living as a trans woman in a conservative society, as Marina faces investigation from detectives, loses her home and pet dog, and faces transphobia and abuse from Orlando’s family. As well as receiving widespread acclaim, the film raised awareness of trans experiences and was utilised by LGBTQ activists in Chile to help push through a gender identity bill which the government eventually approved of in 2018, allowing trans people to update their name and gender identity on official documents.

If you’re looking for a film about the trans experience that’s a little more light-hearted, then American comedy-drama Tangerine might be what you need. Famously filmed using only three iPhone 5S smartphones – although you wouldn’t know, as it still looks incredible – the critically-acclaimed indie production follows Los Angeles-based trans sex worker Sin-Dee who finds out from best friend Alexandra that her boyfriend-slash-pimp Chester has been cheating on her with a cisgender woman while she’s been in prison. What follows is a hilarious, brash and heartwarming buddy comedy that manages to put trans narratives front-and-centre without reducing them to victims or forcing sympathy from viewers. Director Sean Baker spent eight months on the streets with his team getting to know the area and its people, while stars Mya Taylor and Kitana Kiki Rodriguez provided an authentic insight into life for trans sex workers. Tangerine also (importantly) set a precedent for casting trans actors in trans roles. Ma Vie En Rose, which translates into English as My Life In Pink, is a Golden Globe-winning Belgian drama that tells the story of Ludovic, a child who is seen by family and friends as a boy, but identifies and wants to live life as a girl. Ludovic’s family struggle to accept their child’s gender expression, which leads to some heartbreaking scenes including [spoiler alert] a failed suicide attempt and rejection from their community. It does, however, ultimately have a hopeful ending, which we don’t often see in films about the trans or non-binary experience, and expresses how simple gender expression can be through the eye’s of an innocent child. The Danish Girl, which is loosely based on the true story of Lili Elbe, is probably the most high-profile film to focus on the experience of a trans individual. Aside from controversy over casting a cisgender actor in the role of a trans woman – which is very much a valid concern – the film is beautiful, and aims to humanise the trans experience for a more mainstream, cisgender audience. The Danish Girl also examines the effect that transitioning has on Lili’s wife Gerda, who feels as though she’s losing the person she loves. It’s guaranteed to leave you sobbing. American drama Drunktown’s Finest follows three young Native Americans – Nizhoni, an adopted devout Christian seeking out her past; Sickboy, a rebellious father-to-be; and Felixia, a trans woman who dreams of being a model – as they search for love and acceptance on a Navajo reservation in New Mexico. The film thankfully cast a trans actor (Carmen Moore) in a trans role, and was written and directed by Sydney Freeland, a trans Native American woman, helping to present an authentic depiction of the intersectionality between two communities who are both underrepresented on the big screen. The heartbreaking Boys Don’t Cry is based on the real-life story of Brandon Teena (Hilary Swank), an American trans man who moved to Nebraska to find his identity – where he also fell in love with Lana (Chloë Sevigny) – but ended up being brutally raped and murdered by two men in a transphobic hate crime. Swank won an Academy Award for her portrayal of Teena, while Sevigny was nominated. Like The Danish Girl, Boys Don’t Cry was complicit in the trend of casting cisgender actors in trans roles, but given the year it was released (1999), and the amount of awareness it raised for trans people and the discrimination they face, it’s something viewers may be willing to overlook. Named after the Bronx street, Gun Hill Road follows ex-con Enrique (Esai Morales) as he returns home to find his wife Angela (Judy Reyes) has had an affair while he was away, and his daughter Vanessa (Harmony Santana) is in the process of transitioning and coming out, both of which put strain on the family. Harmony earned an Independent Spirit Award nomination for Best Supporting Actress, becoming the first openly trans actor playing a trans person to be nominated for a major acting award in the United States.

While many films on this list are about trans characters, Tomboy instead focuses on gender non-conformity. When 10-year-old Laure moves to a new neighbourhood in Paris with their family, they take the opportunity to adopt a new male persona under the name Mikäel, experimenting with their gender expression and taking part in traditional ‘boys’ activities and play, all with the support of their younger sister who says having a big brother is “way better” than having a big sister. While Mikäel’s mother seems supportive at first, she later makes them wear a dress, essentially ‘outing’ them to their friends who have only seen them as a boy. The film won critical acclaim on its release, especially for its examination of the way gender stereotypes can affect children who don’t conform to them. This legendary 1990 documentary chronicles the ball culture of New York City and the African-American, Latino, drag, gay and trans communities involved, with particular focus on powerful trans women like Venus Xtravaganza, Dorian Corey and Octavia St. Laurent. If you thought the queens on RuPaul’s Drag Race knew how to sashay down a runway, then you’re in for a treat. The film took years to make, and had to be edited down from 75 hours of footage, but it was so worth the effort as it provided an invaluable insight into a part of queer history that was rarely documented – but will now live on forever. Highlighting this fact, the film was selected for preservation in the United States National Film Registry for being “culturally, historically or aesthetically significant” in 2016.