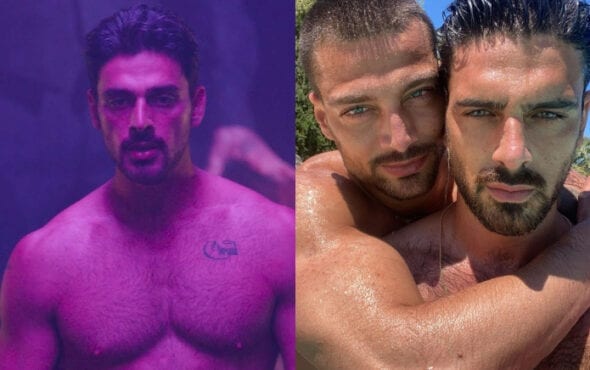 Michele Morrone has addressed rumours about his sexuality.

The star – best known for his performance in the Netflix film 365 DNI (which translates to 365 Days) – sent fans into a frenzy, of sorts, after posting a picture on social media with his co-star Simone Susinna. Fans assumed his caption, “I’m a liar,” was his official coming out.

Following the aforementioned frenzy, the 30-year-old actor took to his Instagram Story to make an official statement about how he identifies.

“I woke up with my team calling me saying, ‘There’s a lot of article saying that you came out,’ because of the picture I took with Simone,” said Morrone. “He became a very good friend of mine, we’re like brothers. We’re shooting a movie together. It was just a picture. Nothing more.”

Morrone then shared his support for the LGBTQ+ community, while reiterating that it was just a “normal picture” and that he “didn’t come out” of the closet.

In regards to the caption on the photo, Morrone added: “An actor is a kind of liar. That’s why I wrote that. Acting… as someone who is not. I didn’t come out. So, I’m so sorry for the confusion. As I said, I’m a big supporter of the LGBT community.

“There’s a lot of young guys and young girls… They would love to come out but they don’t do it because of their families. You know, happiness is priceless, guys.”

Morrone ended his statement with, “Peace and love, I love you so much.”

The film follows a young woman from Warsaw called Laura Biel (Anna-Maria Sieklucka) who falls for Sicilian man Don Massimo Torricelli (Morrone), who imprisons her for 365 days to make her fall in love with him.

Although it received negative reviews for its sexual violence, 365 DNI became a huge success for Netflix and one of the most watched films in the United States on the streamer. Two sequels are currently in development.

You can check out Michele Morrone’s original post below.