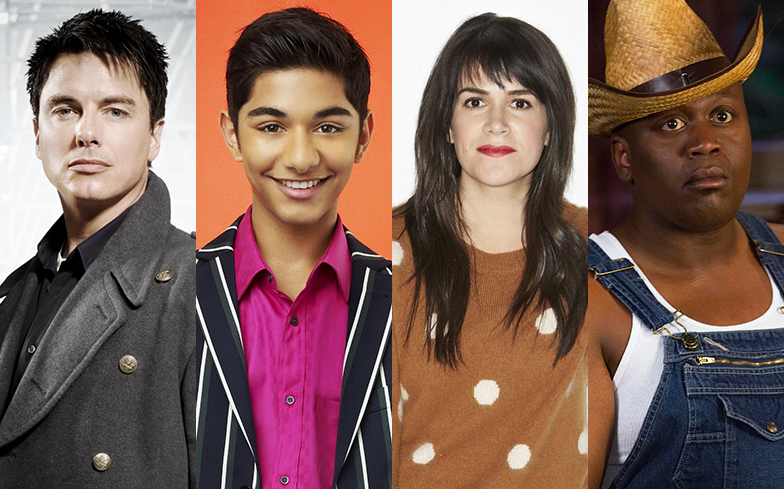 It’s been weeks since Fleabag ended and we are still not over it.

Sian Clifford shocked fans when she announced that there was not going to be any more Fleabag after the perfect bittersweet finale of season two.

We were robbed of Phoebe Waller-Bride’s glorious portrayal of a bi-woman, but Fleabag is definitely not the first queer character whose series got cancelled before its time. Following the lives of three gay men in Manchester’s gay village, Queer as Folk only ran for one year between 1999 and 2000 for a total of 10 episodes, which to be fair is quite a lot for a British show.

Vince (Craig Kelly) has a crush for his best friend Stuart (played by Aidan Gillen, yes GoT’s Littlefinger). But while Stuart’s sex life is quite successful, Vince’s not so much, while, 15-year-old Nathan Maloney (Charlie Hunnam) new to the gay scene, is not lacking in self-confidence.

The series, which ranked at number 13 in The Guardian’s list of the Top 50 TV Dramas of All Time, addressed issues such as coming out at work, meeting the parents and bullying.

The North American version set in Pittsburgh went on to huge success, getting five seasons, but we definitely needed more Queer as Folk this side of the Atlantic. Granted that this Doctor Who spin-off had four seasons, but we could not get enough of this queer twist on the decades-old sci-fi show.

Torchwood was about a rogue covert agency based in Cardiff which investigates extraterrestrial incidents on Earth and scavenges alien technology for its own use.

Main man Captain Jack Harkness (John Barrowman) is an immortal con-man from the 51st century and much more of a sexy lead than any of the Doctor Who incarnations. As Barrowman himself said, “He’ll shag anything with a hole.” This American murder mystery comedy-horror series only had two seasons starting from 2015. Following the members of the Kappa Kappa Tau sorority, some queer action was bound to happen.

During the show Sadie Swenson / Chanel #3 (played by Billie Lourd) is showed having both male and female love interests, getting especially close with her sorority sister Sam before she gets murdered.

Also, Ariana Grande was in it. One of the best teen-dramas of all time, Freaks and Geeks with only one season managed to launch the careers of James Franco, Seth Rogen, Jason Segel and Linda Cardellini.

Amongst its other merits though, there is having had an openly intersex character recurring throughout the series.

In episode 17 Ken’s (Seth Rogen) girlfriend Amy comes out to him as being intersex and that brings him to question his own sexuality. While he wants to break up with her at first, he reconsiders after talking it over with Sam (John Francis Daley). One of the most iconic shows of the 2000s, Betty’s adult braces and complete lack of style will be forever ingrained in our memory. While Betty (America Ferrera) lands a job at Mode, a trendy Manhattan fashion magazine, her teenage nephew Justin was the real star of the show.

A bit too much stereotypical gay, with his heightened fashion sense and involvement in performing arts at school, after it was officially announced in season four that he was gay, Justin became one of the major reasons that people wanted the show to return.

But unfortunately, every season of Ugly Betty received a shorter and shorter run, until it was left to die. Pushing Daisies is definitely the cutest series that no-one knows. Lee Pace plays Ned, a pie-maker with supernatural powers to bring people back to life with a touch. But a second touch will send them to the afterlife permanently.

As useful as the power is when helping private investigator Emerson Cod (Chi McBride) solve crimes, it becomes an issue when he has the chance to bring back to life his childhood sweetheart.

In 2015, Pushing Daisies was voted first in Esquire’s TV Reboot Tournament, which asked fans to vote for the show they would most like to see return to television.

Although the show never had a queer storyline on screen, series creator Bryan Fuller had planned to reveal the coroner’s sexuality and his crush on Emerson Cod. We can’t possibly thank Tina Fey enough for bringing Tituss Burgess’s persona to the screen. As Kimmy’s flamboyantly gay roommate, Tituss’s character is the perfect counterpart to her childlike wonder and ingenuity.

Melodramatic and self-absorbed, an aspiring actor and singer, but we loved him with all his flaws. We know Skins had quite a long run between the UK and US versions, but it never managed to match the genius of the first generation.

Not only it has an openly gay character in Maxxie (Mitch Hewer) but the series’ lead Tony was seen having sexual relationships with both girls and guys. His sexual orientation was never clearly stated, but that is what made the series great – they just didn’t care.

Eight people find themselves in this mental bond, through which they can access each other’s mind and bodies. Amongst the senseates, we have Nomi (Jamie Clayton) a trans woman in a gay relationship with a bi woman, and a Latino a gay man, Lito (Miguel Ángel Silvestre). Although Veronica Mars never had a prominent LGBTQ character, in its three seasons there were plenty of minor LGBTQ characters that populated its world. Almost like in real life.

We just have to hope that this year’s eight-episode reboot stands up to the original and doesn’t ruin our precious memory of Veronica Mars. It would be way too long to list all the LGBTQ characters and moments in Broad City.

In the series, queerness is not just in the occasional nod to a same-sex crush, or another stereotypical gay man.

Broad City has made queerness part of its world from the very first episode and showed how two female best friends can be interested in other women and not want to sleep with one another.

We cried when it ended and we 100% want more of Ilana and Abbi.