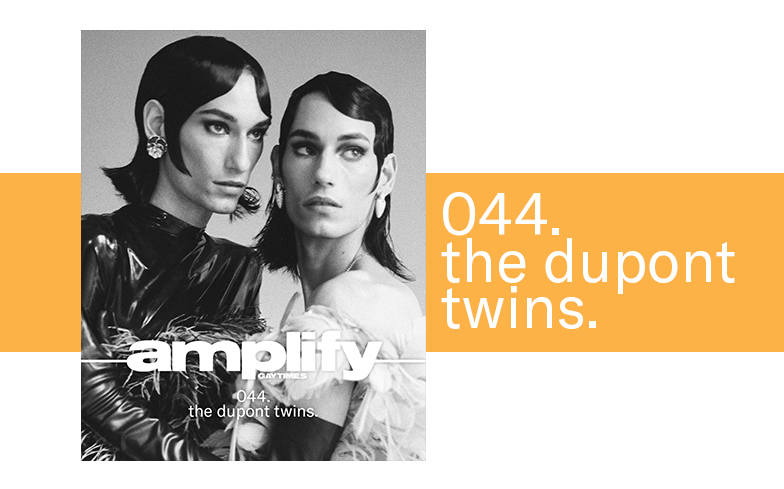 Identical twins Jake and Joseph Dupont are taking the modelling world by storm.

As well as providing authentic representation for the queer community, they were recently invited by none other than LGBTQ icon Lady Gaga to be part of the singer’s new Haus Laboratories beauty campaign, which aims to celebrate everyone regardless of how they identify and encourage self-love.

“I think being recognised and not having to hide our queer identity [in the industry] is an accomplishment on its own,” explains Jake when we ask about their career highlights, which range from shooting for Ellen Von Unwerth’s VON magazine and walking the runway at New York Fashion Week. “The power of our identity and self-expression has actually opened so many doors for us.”

Despite their own success, the twins call out the fashion industry’s reluctance to put actual queer talent in front of the camera, as well as a lack of understanding of different identities. “We can’t tell you how many times we’ve shown up to ‘womenswear’ castings and been told things like ‘men’s week is over’ or ‘the men’s casting is in two hours, you’re early’ as well as being misgendered and mislabeled,” says Joseph.

To accompany their lavish GAY TIMES shoot, which was inspired by American Horror Story: Hotel and The Shining “with a dash of runway”, we spoke to the Dupont Twins about the importance of genuine diversity in fashion, whether the industry is truly accepting of queer people yet, and what it was like to work with their idol Lady Gaga.

How have fashion and makeup helped define you in your queer identities?

Jake: It goes without saying that fashion and beauty runs through our blood. These things for us were never as simple as an outfit or eyeliner – fashion and makeup is who we are. Since as far back as we could remember we were always putting together different looks to express our identity. These tools allow us to be whoever we want to be in our ever-changing world of glamour and they are crucial to our survival. Some people may say that our views are shallow but we don’t expect everyone to understand. The bottom line is that these are our weapons of choice. It’s safe to say that if we were cut off from these ‘things’ our life would not be the same.

As a duo, how do you find balance between each of your creative visions?

Joseph: Taking any two people and putting them together in a creative environment can result in a conflict of interests. The difference with us is that we are identical twins with essentially the same vision. However, while we’re working, we do have differences when it comes to execution, for example Jake focuses mostly on the beauty aspect, working with an array of products collected through the years, discussing our ideas with the artists on set and using makeup to bring out our personalities. I focus more on the fashion aspect, building relationships with showrooms and mixing our own personal archive to create new looks and using clothes and accessories to help finalize our vision. With our expertise in both of these fields, we were able to work hand-in-hand to express ourselves by making our fashion fantasies a reality.

In your experience, is the fashion industry welcoming to out and proud queer people?

Jake: The fashion industry without a doubt has been taking steps in the right direction when it comes to inclusivity. Unfortunately those steps are being taken at a very slow pace and we have a very long way to go until the industry is a true reflection of the people that are not only living in this modern world but who have had a huge part in making the fashion industry itself. It always blows my mind to see how many members of the queer community are behind the scenes as designers, photographers, makeup artists compared to how many of us are actually represented in front of the lens. It’s been interesting watching the industry’s attempts to include faces for the queer community because a lot of the time they’re more committed to the idea of queerness and not actual queer people. I can’t begin to tell you how offensive it is seeing designers send a straight masculine male model down the runway in heels and a dress or putting a cisgender woman in a pant suit on a magazine cover and calling it ‘gender fluid’ or slapping another queer identity on models that don’t actually identify with our titles. It’s a direct slap across the face when these attempts for inclusivity fall so short. We can absolutely do better with the representation, payment, and acceptance of the queer community in the industry and we are both making that a top priority in our career.

How important is it for you both to blur the lines between traditional ideas of masculinity and femininity in your work?

Jake: For us, because we don’t identify with male or female, it’s very important to blur said lines. In our everyday lives this is who we are, even when the cameras are off, so it’s imperative that our work represents our personal lifestyle. With every job we take we’re using the power and platform that we’ve gained to create visibility for others that don’t conform to a binary gender construct in hopes that they too can feel confident and safe with who they are. With that being said, it’s important to say that we are not the one and only example of the queer or nonconforming community. Everyone has their own individual identity and follows their own rules and what we’re trying to do with our work is to show that it’s okay to embrace your individuality.

Some people would argue that presenting as openly and visibly queer, or challenging gender expectations in a heteronormative world, is in itself a form of protest or activism – would you agree?

Jake: It’s a continuous fight for us to step out every day and commit to being our authentic selves. This is not something that we can turn on and turn off, or something that we should have to hide to make other people comfortable. Queer identities and people aren’t something that just popped up overnight, we’ve always been here, the communities have just been more underground in the past. With all the resources we have today, especially social media, it’s made it so much easier for us all to come into the light and connect with each other no matter where we are in the world. Unfortunately we live in a world that is still so against everything that the community stands for which is still forcing a majority of us to keep quiet about who we are, but with the conversation that has now been started around queerness it’s the perfect time to use our opportunities as models to speak out and push for further acceptance. All our lives we’ve been conditioned to accept and conform to heteronormative lifestyles. We don’t know if we would necessarily say we’re protesting intentionally but we feel it would be a shameful waste not to use the opportunities we are privileged to have to push back and bring awareness and normalisation to different lifestyles and work towards a better, more accepting world where everyone can benefit from basic human rights and exist just as they are without question or judgement.

Have you faced any hurdles while doing this?

Jake: Just our sheer existence comes with many obstacles. People don’t agree with our lifestyle and are not afraid to tell us. However when it comes to fashion, some of the most challenging aspects are watching the people in the industry preach about inclusivity, referencing models like us for a campaign or show, and then turning around and using a cisgender male or female model to play dress up for a day rather than hiring and – we can’t stress this enough – actually paying a queer model.

Joseph: There is also a mind-boggling amount of confusion when it comes to respectfully addressing the queer community in the industry as well. We can’t tell you how many times we’ve shown up to ‘womenswear’ castings and been told things like ‘men’s week is over’ or ‘the men’s casting is in two hours, you’re early’ as well as being misgendered and mislabeled. The reality is we don’t want to be labeled. You can just refer to us by our names, and when it comes to others, it’s as simple as asking what they prefer.

How did it feel finding out you’d be appearing in a campaign for Lady Gaga?

Joseph: The moment we initially got the news that we booked the campaign it was very much one of those ‘pinch me, I’m dreaming’ reactions. Just the idea of being in the same room with the woman we idolised since we were young teenagers was hard to comprehend. The amount of emotions combined with adrenaline rush both of us had would probably leave a professional sky-diver shaking in their boots and it brought us to tears. This is something we had manifested since we could remember and it was just so incredible to think that somebody like Gaga sees what we see in ourselves so much that she chose us to represent her own brand.

Jake: It was an out of body experience to say the least. There is so much talent, beauty, creativity and dedication in every single model she chose and every person on her team, including Gaga herself. Everybody there was so warm and inviting, not to mention conscious and aware of things like pronouns and identities. It was such an accepting and open-minded environment where we were not only encouraged to be ourselves, but praised for it.

Joseph: While working, it really felt like we were all a family and it was truly one of the most amazing experiences on a set we have ever had.

Gaga has such a strong connection to the LGBTQ community – why do you think it’s important to have role models like her?

Joseph: It’s extremely important to have role models like her, especially when growing up in a world where the queer community was so underrepresented. Not only did she face the challenges of being a woman, she also faced the challenges of being a part of the queer community. She is a flawless example of what a leader looks like. She didn’t just wear a rainbow t-shirt or make a song about gay rights. She showed up and fought for us every chance she got. Through her music, self-expression and political views she has dedicated so much of her life and career to the LGBTQ community.

Jake: I think we speak for all of us when we say we don’t know what we did to deserve her, but she is irreplaceable and we will forever be in her debt. We strive to lead by her example.