Anna Calvi on queer representation in music, the personal nuances of gender, and how her new record is going. 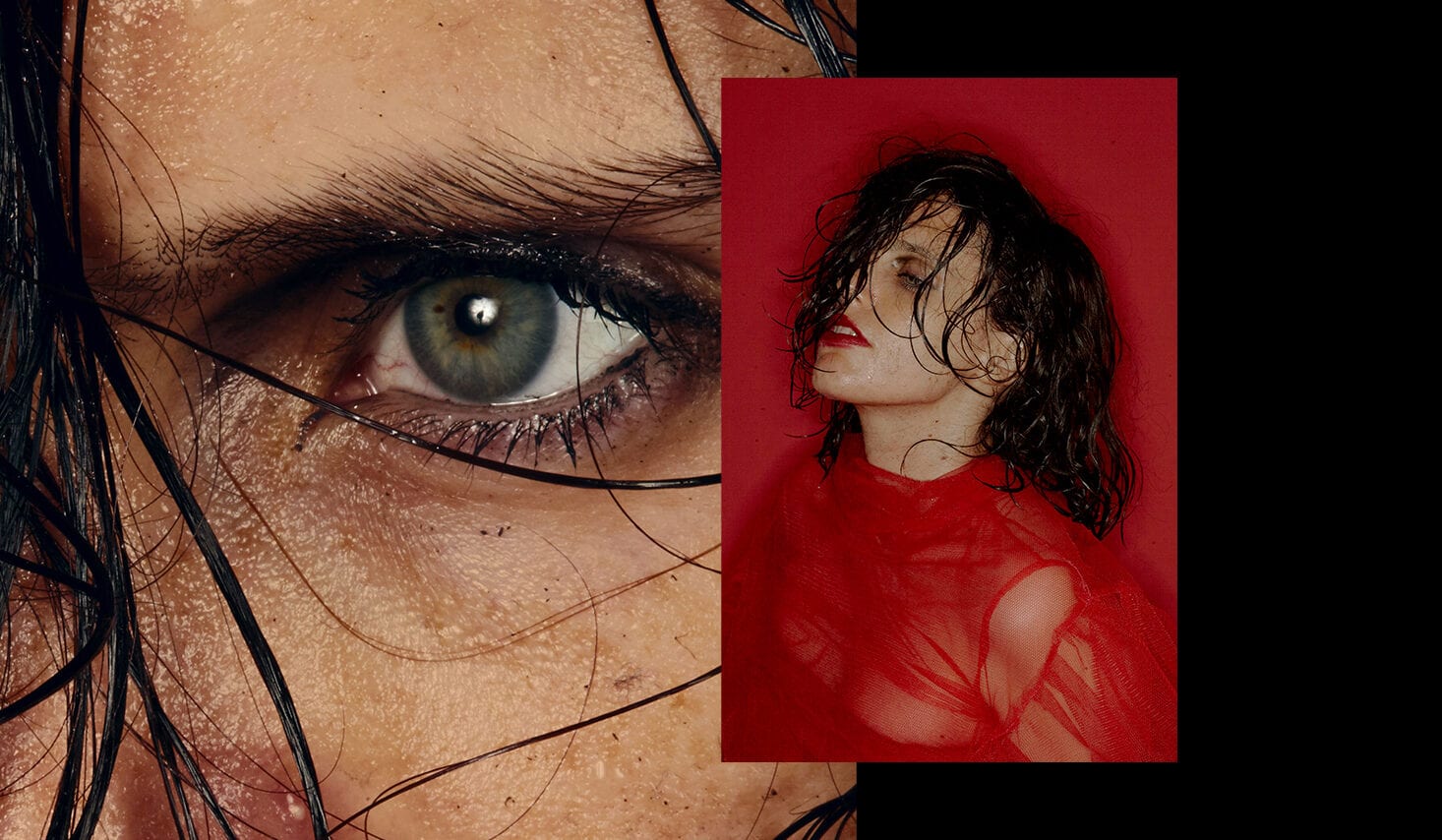 Anna Calvi is known for her sharp songwriting style and acclaimed records. Now, 10 years after her debut album, the British artist is gearing up for another iconic release.

Away from the hustle and bustle of the city, Calvi has grown to adjust to the quiet of Southern England. If anything, the serenity of Dorset has aided her creativity, the singer admits. “It’s a different pace of life here. I’ve got used to being around nature that sort of feeds me,” Calvi explains over Zoom. “For me, with creativity, you need to have a stable environment, emotionally, to be able to go interesting places with your work. When all this happened, it was stressful for everyone and I didn’t find it a very creative time at all. I guess it just shows how humans are able to adapt. [We] slowly get used to this new way of life.”

In a new environment and fresh project on the way, Calvi has been spending time reflecting and celebrating the anniversary of her self-titled debut record. With the incredible release hitting the 10-year mark, Calvi tells GAY TIMES how she feels about the milestone. “It’s interesting to look back and think about how little I knew of what was in store for me when I put my first album out,” she says quietly over the call. “I had no idea if anyone would ever even hear it. It’s nice to see where I’ve changed, where I’ve stayed the same, and where my core beliefs of music are. I think my beliefs are quite similar, but, obviously, the more music you make, the more you try and kind of experiment in different directions.”

As Calvi’s career has continued to unfold, the singer-songwriter considers what lessons she’s taken away from her success, but instead offers a note of gratitude to those that came before her. “I feel incredibly thankful to LGBTQ+ artists who went before me, or during my career, and who have been expressing their true selves, because I find it really, really inspiring,” she says sincerely. “It’s the closest thing I can feel to an extended family and I think about it often and how much it means to me that they’re there, and I would love it if there was a new artist that felt the same about me.”

Alongside personal anecdotes and thoughtful retellings from her career, there’s an unmistakable beat in our conversation with Calvi – the artist’s tangible rhythm of excitement when we touch on a mutual love for guitars. And, naturally, the remarkable guitarist breaks down why she finds such an affinity with the instrument. “When I first played the guitar, when I was a kid, it was years and years off of me trying to sing in any possible way. I was really phobic about singing, so, for me, my guitar was my voice,” she explains. “It was the one thing I had and it’s always been a voice of freedom for me and I think that I really wanted to realize that to its fullest extent on my last record, Hunter, and to allow it to be very kind of wild and unleashed. I suppose that’s how I’ve grown as an artist. I’ve tried to become freer in all possible ways, in my voice, and in my guitar.” 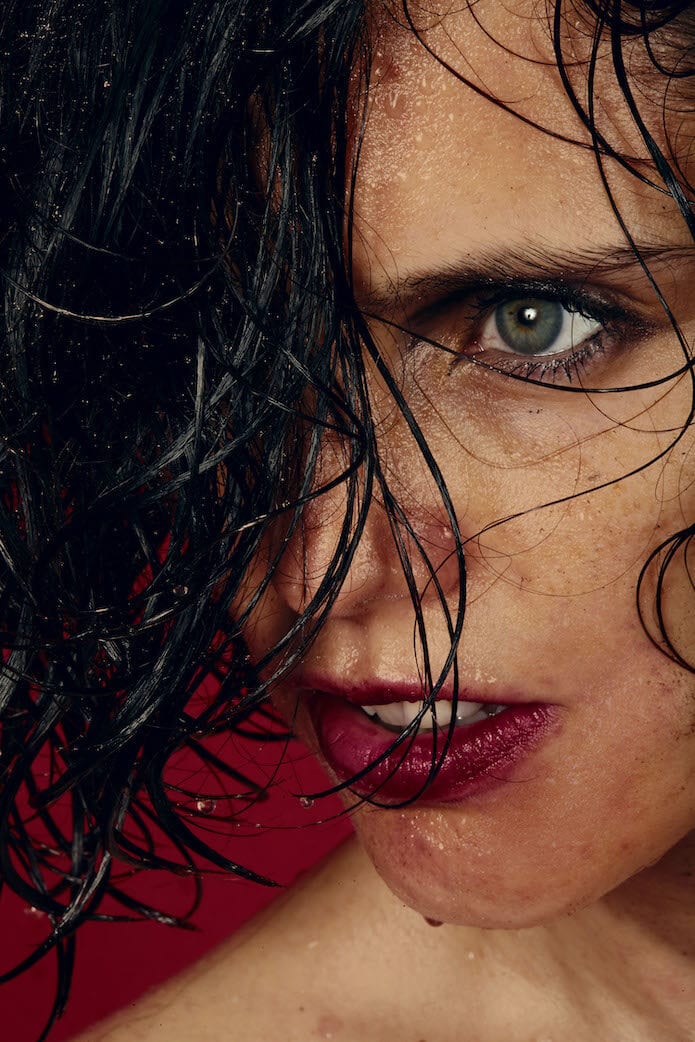 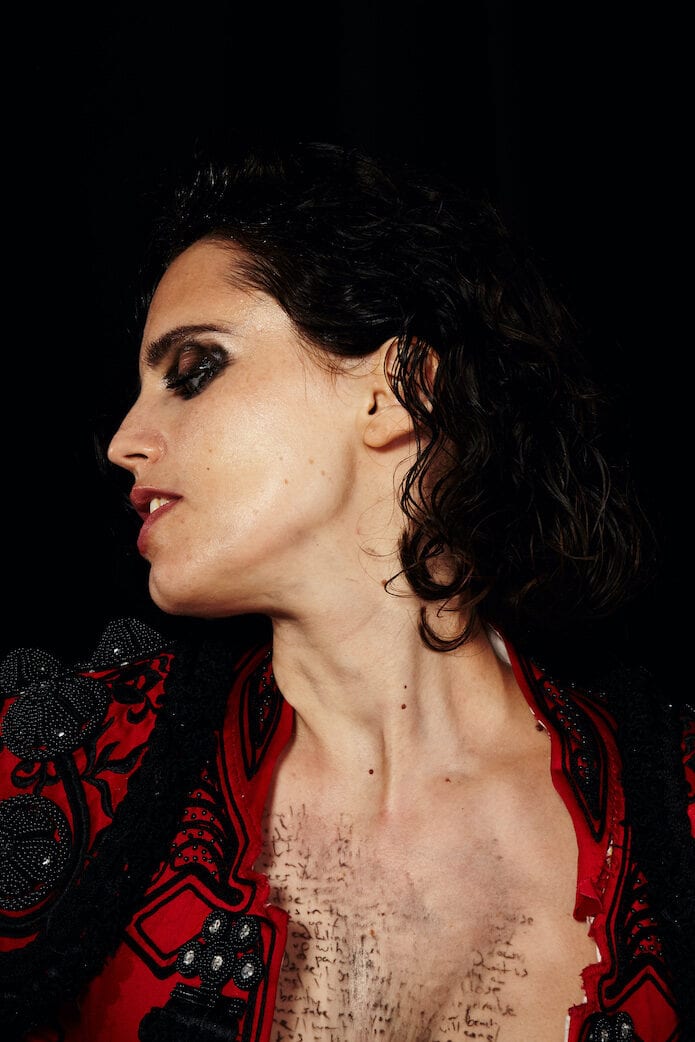 For Calvi, that liberation is something she openly shares in her art. As she succinctly puts it; the guitar is “a voice to freedom”. The guitar, in and outside of her music, has remained a vocaliser of its importance. Recently partnering with Fender, Calvi shared what she loved most about the guitars and her music. Speaking to GAY TIMES, the singer-songwriter explained how she’s able to find liberation in an instrument. “It’s that feeling of when you know exactly how you feel, but you can’t quite find the words to say it,” she says. “It’s almost like there aren’t the words in the English language to say exactly that emotion that you’re feeling. You almost want to use a sound effect to explain it. Whether it’s “ah!” or whatever it is. What making music does is it puts in those words that aren’t there in a way of expressing with your language; it’s a way of expressing it differently using your body and yourself, and so it can feel very liberating.”

For Calvi, music isn’t just a manifestation of sound and emotion, but it delves deeper into the composition of the self. “There’s a place where you’re not having to perform a gender and that’s what it is for me. I can exist exactly how I am, which isn’t really particularly male or female,” she explains. “I mean that’s how I feel even though I do use “she”. I do find that the way that I am on stages is the closest to not having to perform, which is odd because it’s a performance, but it’s the most real that I get in some ways. I’ve always found it strange how the guitar has been seen as such a male instrument because for me, the guitar is very neutral and it’s so malleable. That’s what I love about it. It never has to be one particular thing and there are so many binaries in our life that hold us down and hold us back. Music should definitely be a place where we can let go of those shackles.”

Outside of being a spoken advocate for the guitar (which almost had me considering learning acoustic again), Calvi has a bigger project at hand; the new record. Incredibly eager to know how things are panning out, I ask Calvi how the process is going. “I’m at the point where I’m feeling a bit stressed about it,” she laughs. “I’ve sort of roughly got the songs together, but I haven’t played them to anyone, so I’m sort of freaking out. One minute I think they’re great and the next minute I think they’re shit. But that’s just part of the process and that’s always the way with me. It’s always a bit of a headfuck to make an album. It’s the creative curse, isn’t it?”. We chat about the difference between her last record and the upcoming work and Calvi admits she’s ready for some change. “I think it’s a bit subtler,” she says referring to her acclaimed record Hunter. “I really wanted my last record to kind of explode out the speakers, whereas this one’s a little, at the moment, it feels a bit more introspective, but we’ll see.”

Flipping back from new to old, our conversation steers back to Calvi’s career. As I ask another question about her music, the musician reflects on how the reception to her art has shifted. “I started 10 years ago, and I was always being asked, what’s it like being a woman playing a guitar or what’s it like playing like a really phallic instrument and I always found it so weird that people thought that way,” she recalls. “One marker of change is that I get that question less now from journalists like “What’s it like being a woman, blah, blah, blah, with a guitar”, so I think that’s a really good sign. I also think there’s a real freedom for women playing guitar, because we don’t have this sort of cliche of the male rock guitarist with us and how the guitar is like an extension of his body. For women, this is completely new and ours and it feels really exciting and that shows in the fact that some of the most interesting guitarists now happen to be women like Courtney Barnett and St. Vincent.” 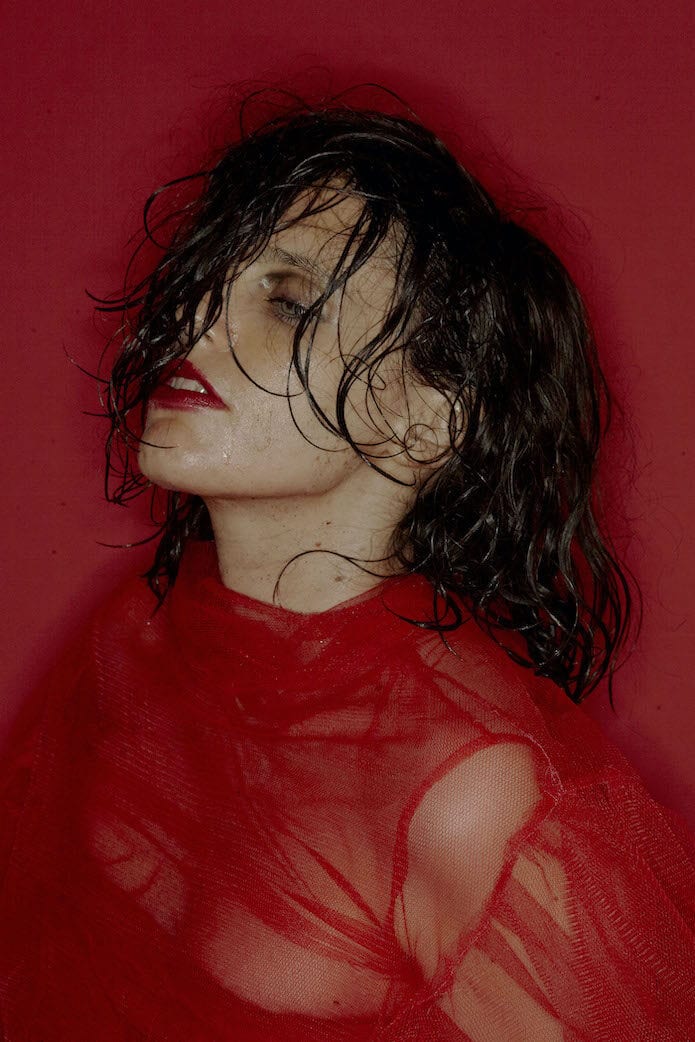 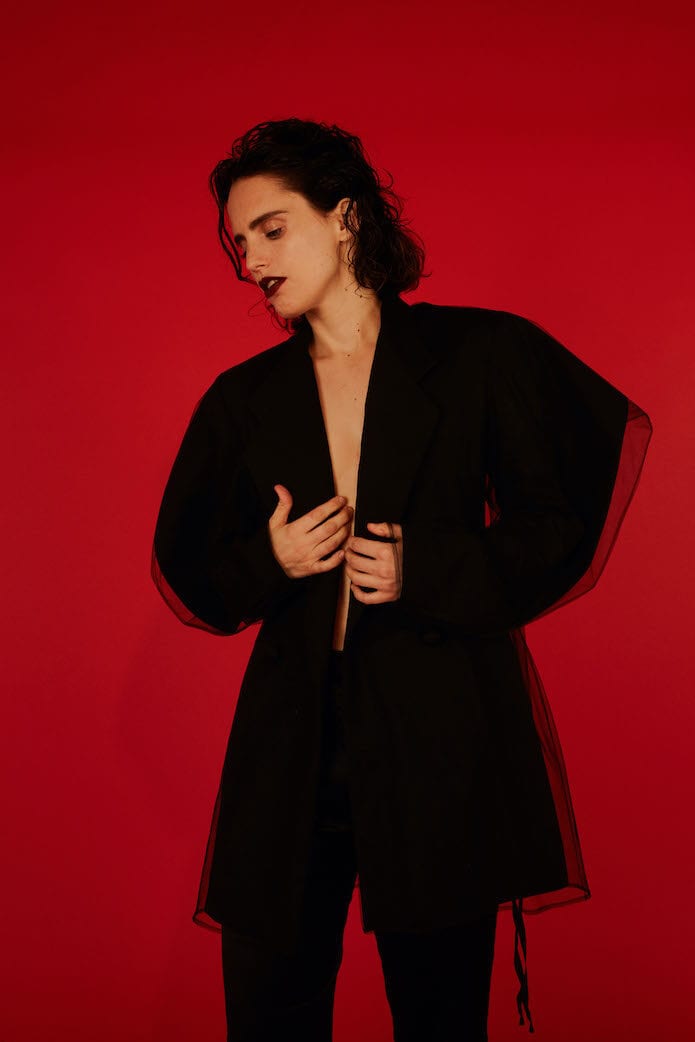 While Calvi sees the spotlighting of female musicians as a victory, she reminds us that attitudes have shifted as much as we’d like. “There’s still an attitude that it’s surprising when a woman is creative like “oh, you’re creative”, but with men, it’s assumed,” she explains. “There are some older male journalists that still act surprised that a woman could care about something other than having children. I think the fact that there are more female journalists does help move that conversation along because women aren’t really going to ask other women that kind of stupid question”. Pausing, Calvi adds on: “You know, with my first album, I had a journalist say this is all well and good (the record), but “when are you gonna have a baby?”. She notes how the question felt very suitable for the 1950s.

Starting afresh, the singer muses about her recent feelings around the industry, something she’s struggled to separate from reality and her personal experience growing up. “There is a feeling, as a female artist, you have to prove yourself before people trust that you know what you’re talking about. If I were to work with new people in the industry, it’s a very male-dominated sphere, so there’s still this feeling that I must prove that I am the shit, because they’ll assume otherwise. I feel men are assumed to be competent until they’re proven that they’re not, so there’s a disparity between men and women in that sense.”

Industry-wide sexism isn’t something you can sweep under the carpet, and nor should you, yet while horror stories continue to seep through the cracks, Calvi is hopeful we’re starting to see a slow, gradual shift on the surface. “There’s always a lesson to be learned and there’s always someone who is even more marginalized than you than yourself. You can either be like “this is my time now, because I’ve been repressed”, but you know no one is free until everyone is free, and that’s, that’s the truth of it,” she emphasises. “So, I think it’s really important to be aware of that and make sure that you’re leaving room for everyone to be present in the conversation. Imagine the amazing art there would be in the world if there was a more accurate representation of what humanity is.”

And as our conversation wraps up, we close out on a natural thinking point: the appropriation of queer aestheticism falling into the mainstream. A topic Calvi is all too familiar with, she’s more than equipped with a to-the-point answer. “It pisses me off that it’s cool to be you be queer and that some people think of it similarly as some kind of fashion statement. For people who are actually queer, this is sometimes life or death,” she stresses. “If you’re feeling really isolated and afraid for your safety, it can actually make a life or death difference whether you feel represented by the culture that you’re seeing and that you feel that your words in your heart are being sung by someone who really understands what you’re going through. It’s so much deeper than “oh this is cool” and sometimes it does feel a bit like the straight mainstream audience sees it on that level as “edgy”, and I find that very frustrating.” 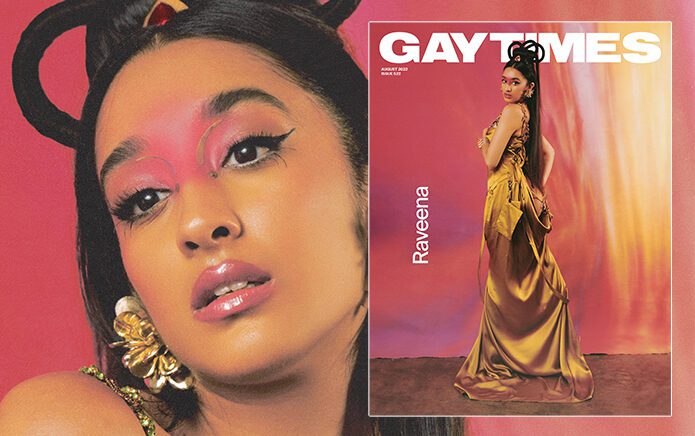 In her cover story for GAY TIMES, Raveena says she wants her music to resonate with "everyone" and not just "Brown people". 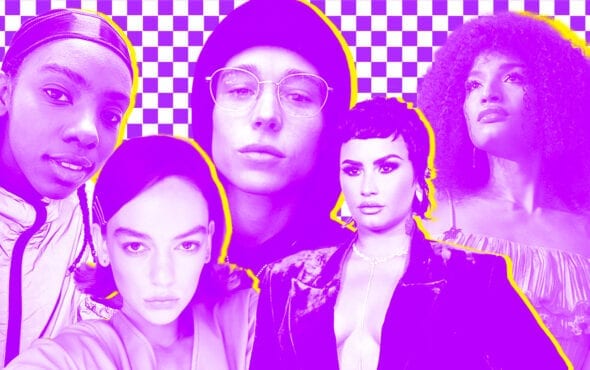 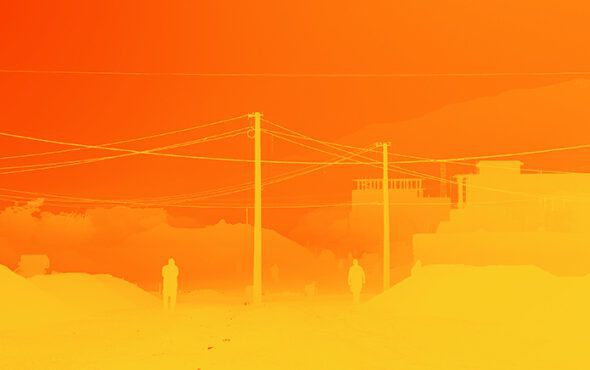 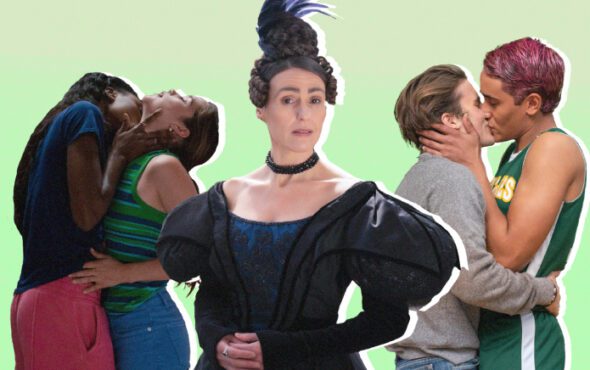