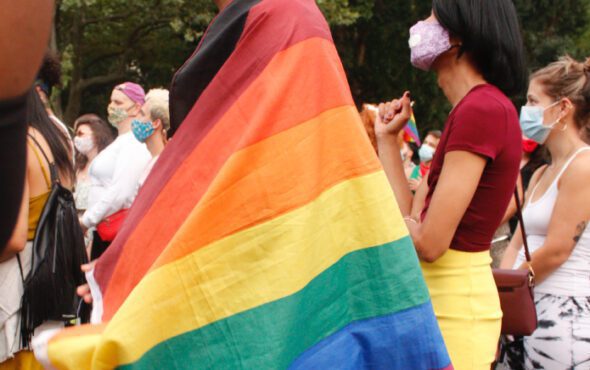 LGBTQ+ activists took to the streets of New York this week to protest recent hate crimes against the community in the city.

In the early hours of 4 September, Abimbola Adelaja and a friend were attacked in the Bushwick area when they were buying a sandwich.

Two men approached them and began stabbing them with a screwdriver and glass bottle, shouting homophobic slurs as they did so.

Adelaja, who is gay, suffered a punctured lung as a result of being stabbed four times and his friend, who is straight and remaining unnamed at this time, was knifed seven times – though both are now in a stable condition.

The pair also had their phone and money stolen by the culprits and the New York Police Department (NYPD) has since arrested one suspect on 8 September.

The 31-year-old man has reportedly been charged with attempted second-degree murder, hate-crime-related robbery, harassment, aggravated harassment, menacing and assault with a weapon.

In response to the attack, a rally was held in support of the victims outside the site of the Bushwick bodega where the men were targeted.

It quickly turned into a march that went throughout Brooklyn, which Adelaja confirmed was organised by Qween Jean, the founder of Black Trans Liberation, and activist Gia Love, a close friend.

As said in an Instagram post, Adelaja is using his ordeal as a way to “let those that wish us harm know that we are not afraid and will never stop living freely and proudly”.

“My attack is one of many that has happened in the Bushwick area and this must stop,” he added.

So far this year, WLNY reports that New York has seen 64 anti-gay hate crimes – three times the number at this point in 2020.

The victim explained that one of the most traumatising parts of the attack was that none of the witnesses stepped in to help and that they allegedly did not call the police as it unfolded.

As a former marine, Adelaja said that his determination is what kept him alive as he claimed he had to flag an ambulance down himself.