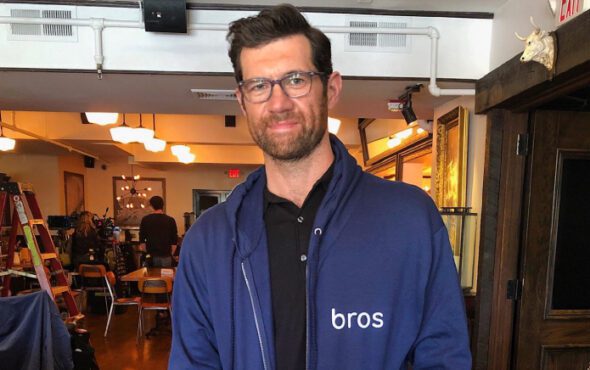 American Horror Story star Billy Eichner has opened up about the “funny and romantic” sex scenes in his upcoming film Bros.

In March 2021, the forthcoming project made LGBTQ+ history when it became the first queer romantic comedy following gay men to be backed by a major studio.

“In shocking news, BROS will be the first rom-com about gay men ever produced by a major studio and, apparently, I’m the first openly gay man to ever write and star in their own studio film. Only took 100 years! THANKS HOLLYWOOD,” Eichner celebrated on Twitter at the time.

Since that fateful day, the film continued to break barriers, with all of the principal heterosexual roles being played by openly LGBTQ+ actors and actresses.

Bros officially wrapped in November 2021, and fans have patiently waited for more information regarding the film’s content and plot.

In a recent interview with Collider, the Parks and Recreation star revealed when a trailer for the film would be released.

“The trailer is coming soon. I can’t say when. We’re going to unleash the Bros trailer soon. They would kill me if I told you what day, so I can’t. But very soon,” he revealed.

Later in the interview, the 43-year-old actor opened up about the film’s sex scenes and the importance of their inclusion.

“It’s part of life, you know? It’s a part of dating. For straight people, for gay people, for bi people, for everyone. And we’re making a romantic comedy,” he explained.

“Sex is romantic, and it’s also really funny. We take sex very seriously. But sex can be really funny. And how can you do a story about two people falling for each other and not deal with sex?”

He went on to say that LGBTQ+ people don’t have as many forms of entertainment that approach sex with a light-hearted or romantic manner.

“It’s like we’ve either had two-dimensional sitcom characters who talked about sex, but in a very cartoonish way that didn’t feel real,” Eichner continued.

“So it was important for us to include that. And think it’s the authenticity of the movie that’s making everyone, straight people, gay people really come alive when they see it and really be thrilled by it.”

Eichner’s recent comments come a few weeks after he said the film was “unlike any comedy or romantic comedy that you have ever seen.”

“It’s not about gay people suffering tragically. It’s about how hard it is to find another tolerable human being to go through life with,” he said during Universal Studios’ showcase at CinemaCon in Las Vegas.

Bros is set to follow Eichner and Luke Macfarlane characters who are, according to Universal, “maybe, possibly, probably stumbling towards love. Maybe. They’re both very busy.”

Bros is set to hit theatres on 30 September.

And that’s a wrap on BROS!!! It’s too soon to say much more but this was a very meaningful experience for me. So for now I just want to say THANK YOU to a crew that worked insanely hard and a warm, hilarious, historic cast that cared so much. I can’t wait for you to see it. ❤️ pic.twitter.com/WAenv9QwJm