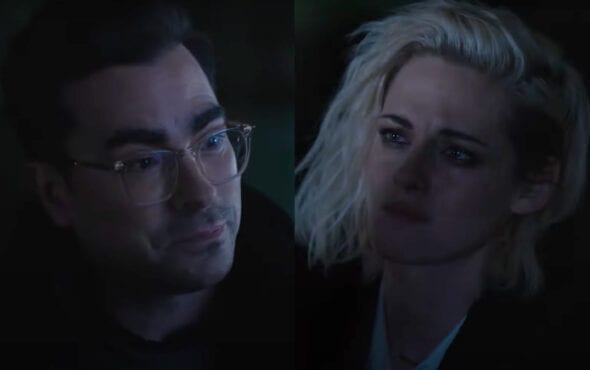 “Once you say those words, you can’t unsay them. That chapter has ended and a new one has begun, and you have to be ready for that.”

In November, history was made when Hulu released the first major LGBTQ+ Christmas film.

There, Abby discovers that Harper hasn’t yet come out to her conservative parents, played by Victor Garber and Mary Steenburgen. Of course, chaos then ensues.

Upon release, Happiest Season received widespread acclaim for the cast’s performances – especially Plaza, whose character proved to be the breakout on social media – DuVall’s direction, and for finally providing LGBTQ+ audiences with some much-needed festive queer.

One scene in particular massively resonated with audiences, when Levy’s character, John, comforts Abby after – SPOILER ALERT – Harper denies their relationship to her parents at the Christmas party.

“Harper not coming out to her parents has nothing to do with you. Remind me, what did you parents say when you told them you were gay?” John asks Abby.

After Stewart’s character responds that her parents “loved and supported” her, John confesses: “My dad kicked me out of the house and didn’t talk to me for 13 years after I told him.

“Everybody’s story is different. There’s your version, and my version, and everything in between. But the one thing that all of those stories have in common is that moment, right before you say those words, when your heart is racing and you don’t know what’s coming next.

“That moment is really terrifying. And once you say those words, you can’t unsay them. That chapter has ended and a new one has begun, and you have to be ready for that. You can’t do it for anyone else.”

You can watch the scene in its entirety on Hulu’s official YouTube channel here or below.

When we spoke to Levy and Plaza ahead of the film’s release, the former said he hopes the film will “open doors for films more like it”.

“I hope it makes people feel comforted in a time that’s not necessarily the most comfortable for people in the community,” he explained.

“And I hope people have a good time, see themselves on screen for the first time. It’s long overdue, but I’m just so thrilled to be a part of it, and I’m excited for people to see it.”

Plaza added: “Me too, and I hope that it joins the ranks of all the classic Christmas films and is thrown right in there, so that all of those grouchy grandmas and grandpas can watch it and get off their high horse.”

The stars also had a tense showdown over their favourite LGBTQ+ Christmas anthems. It was the battle of deadpan personalities that we need and DESERVE.

You can watch GAY TIMES’ interview with Dan Levy and Aubrey Plaza for Happiest Season here or below.