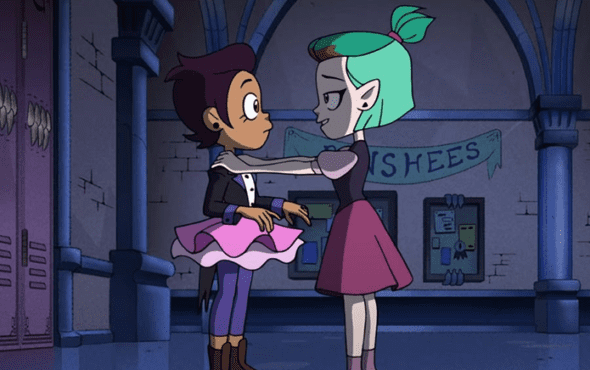 The series creator was originally told by ‘certain Disney leadership to not represent the LGBTQ+ community.’

The latest episode of The Owl House just made queer history for Disney.

The animated fantasy series follows the adventures of Luz, a teenage girl who stumbles across a portal to a magical world. There, she befriends a powerful witch called Eda and her dog-like demon warrior King, and enrols into a Hogwarts-esque school called Hexside Academy of Magic and Demonics.

In Enchanting Grom Fright, the 16th episode of season one, the series revealed that one of its main characters identifies as part of the LGBTQ+ community. The episode followed Luz and her enemy turned friend Amity, an abomination expert at Hexsied, as they prepare for Grom – their school’s version of prom.

Amity is selected as the Grom Queen, where she is tasked with fighting a monster who takes the form of their worst fear, but asks Luz to take her place. The two ultimately defeat the monster and Amity’s fear is kept a secret, although the audience discover that she was planning on asking Luz to Grom as her date.

The character has previously shown a romantic interest in male characters, so fans hailed the character as a “bisexual icon” and praised the series for introducing Disney’s first ever bisexual main character.

One fan tweeted: “I still can believe that Disney Channel has now a bi character and a girl crushing on another girl confirmed… it still gives me literal goosebumps I’m so happy that kids will grow up watching these types of stuff.”

Another wrote: “Thank you so much for giving us such an enjoyable show with gay rep in it. I cried when I watched Grom because, as a bi girl and a long time Disney fan, I never thought I’d see myself represented.”

Representation matters! Always fight to make what YOU want to see! As OH continues I can't wait to explore things that are important to me and my crew. Looking forward to the next chapter. 🦉💕

…Which is next week in WING IT LIKE WITCHES!
Thank you for watching! #TheOwlHouse pic.twitter.com/U8PHHT2g91

Dana Terrace, series creator, said on social media that it was always her intention to “put queer kids in the main cast,” despite being told by “certain Disney leadership” that she “could NOT represent any form of bi or gay relationship on the channel.”

She added: “I’m bi! I want to write a bi character, dammit! Luckily my stubbornness paid off and now I am VERY supported by current Disney leadership. (Thank you @NashRiskin and team!) Not to mention the amazingness of this crew.”

Alex Hirsch, who created the animated mystery series Gravity Falls, celebrated the episode – and Dana – on Twitter, but revealed that Disney “FORBADE” him from any “explicit LGBTQ+ representation,” saying: “Apparently “happiest place on earth” meant “straightest.””

In 2012 the Disney censor note on this image would have been:
“inappropriate for channel, please revise, call to discuss” (to avoid a paper trail)

Props where props are due! This time, Disney- you did good. pic.twitter.com/HLDux1jNUk

He continued: “In 2012 the Disney censor note on this image would have been: “inappropriate for channel, please revise, call to discuss” (to avoid a paper trail). Now in 2020 – there’s no note at all. Props where props are due! This time, Disney – you did good.”

Earlier this year, Disney boss Bob Chapek vowed to make films and TV shows that represent marginalised communities. “We want to represent our audience,” he said at a meeting for the company’s shareholders. “We want to tell stories that our audience wants to hear, that reflects their lives.”