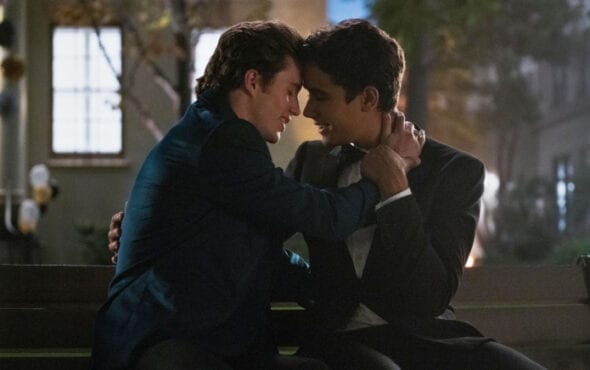 The second season of Love, Victor will be “spicy”, according to the stars of the beloved teen drama.

Ahead of the series’ debut on Disney+ later this month, we spoke with Michael Cimino (Victor Salazar) and George Sear (Benji Campbell) about what we can expect from its follow-up.

“There’s a lot more evolution with their characters,” Sear tells GAY TIMES over Zoom, before an excited Cimino chimes in and describes the new episodes as “spicy”.

“I like the word ‘spicy’. It’s a little more spicier. I think that’s a very accurate word to describe it. It definitely expands upon everyone’s relationships,” he tells GAY TIMES, before confirming it “picks up right where the first season stopped”.

George adds: “It also goes deeper, for sure. It goes into some other… Yeah, it will be worth it. We’re halfway through!”

Set in the same world as Love, Simon, the series focuses on the title character, a new student at Creekwood High School who, like Simon, is on a journey of self-discovery as he struggles to come to terms with his sexuality.

Although the spin-off premiered in the US back in June, in which it became the number one most-watched drama on Hulu, it failed to find a home overseas. It has now been confirmed that the critically-acclaimed title will arrive on Disney+ from 23 February on Star; the sixth brand to launch on the service alongside Marvel, Pixar, Star Wars, National Geographic and Disney.

Star will double the amount of content available on Disney+ and will include productions from Disney’s creative studios, such as Disney Television Studios, FX, 20th Century Studios and 20th Television.

Series that have been confirmed to debut on the service include 24, Atlanta, Black-ish, Buffy the Vampire Slayer, Desperate Housewives, How I Met Your Mother, Lost, Prison Break, Ugly Betty and The X-Files.

As for movies, you can expect LGBTQ+ favourites such as Boys Don’t Cry, Cleopatra, Deadpool 2, The Devil Wears Prada, Evita, The Fault In Our Stars, The Favourite, Jennifer’s Body, John Tucker Must Die and Moulin Rouge.

You can check out the full list of shows and movies coming to Star here.

You can also read our full interview with Love, Victor stars Michael Cimino and George Sear in the brand new issue of GAY TIMES Magazine, out 26 February.