ElyOtto is the trans TikTok star taking on the music industry

ElyOtto is taking the internet by storm with his breakout single SugarCrash! We catch up with the hyperpop star to see what he has planned next.

“Are you kidding me? I can’t even listen to SugarCrash! anymore,” Elliot laughs down the phone. 17-year-old Elliot Platt aka ElyOtto is on the way to school and has just enough time to cram in an interview before class. The online hitmaker, best known for his maximalist hyperpop sound, admits things have been “pretty average” the last few weeks. Well, as “normal” life can be for a teen raking up hundreds of millions of streams online. “I still go to school. Homework is the number one priority,” he says. “I adjusted quite well and I love the attention, but I do know it can be a little much tricky sometimes.”

Internet fame crashed into Elliot’s life overnight, but it wasn’t on the artist’s agenda. “I was expecting to get like 100 streams at most,” he tells GAY TIMES. The Canadian artist developed a knack for creating experimental semi-fleshed out tunes slathered in autotune and synths and, sure enough, the sickly sweet Sugarcrash was its own mini-project. “I posted a little video on my TikTok to show some of my mutual’s like ‘Hey guys, please maybe stream this’ and the likes and the comments just kept coming in. I was totally freaking out,” Elliot recalls. The song, an intensely addictive 120-second loop of pitched vocals and hyperactive sound effects, became an instant hit on TikTok and its success quickly spilled over onto Spotify and social media. A neurotic single, SugarCrash! instantly recognisable for its overexaggerated, crunching tones and dark lyrics: ‘I’m on a sugar crash / I ain’t got no fuckin’ cash / Maybe I should take a bath / Cut my fuckin’ brain in half.’

Growing up in a musical household, Elliot was immersed in music from a young age. The teen is aware of his luck in landing a record deal through TikTok. “It was exhausting,” he says, pausing to think out his response. After SugarCrash! took off, the Calgary star found himself facing interest from seven music labels. “I had interviews with each and every one of them every day. It felt like non-stop work and I collapsed out of all of that. I was so sad. I wanted it all to be over,” he confesses. So, when Elliot’s lawyer pointed out the best deal, the singer jumped at the opportunity to sign. Seeking out a path in music didn’t seem too strange for the newly signed RCA artist, even if it was off the back of an unexpected megahit. “Both of my parents are musicians so I always had instruments lying around the house. It was always just an open possibility for me.” While Elliot nonchalantly describes everything as “working out”, the singer’s rise to fame is part of a new wave of Soundcloud stars and TikTok influencers making the switch from social media to big bucks labels. Today, you can land a top track on the Billboard top 40 thanks to a meme or a seamless TikTok transition challenge – you won’t have to think about shifting crates of physical records or spreading the word of your new single. Although it’s happened to him, Elliot was taken aback by how quickly the industry wanted to snap him up. “I’ve seen it happening to other creators but I didn’t exactly believe it until it happened to me,” he laughs. “It was pretty shocking and I think TikTok has changed the music industry forever and that’s both a good and a bad thing like, hey, I’m not complaining.” 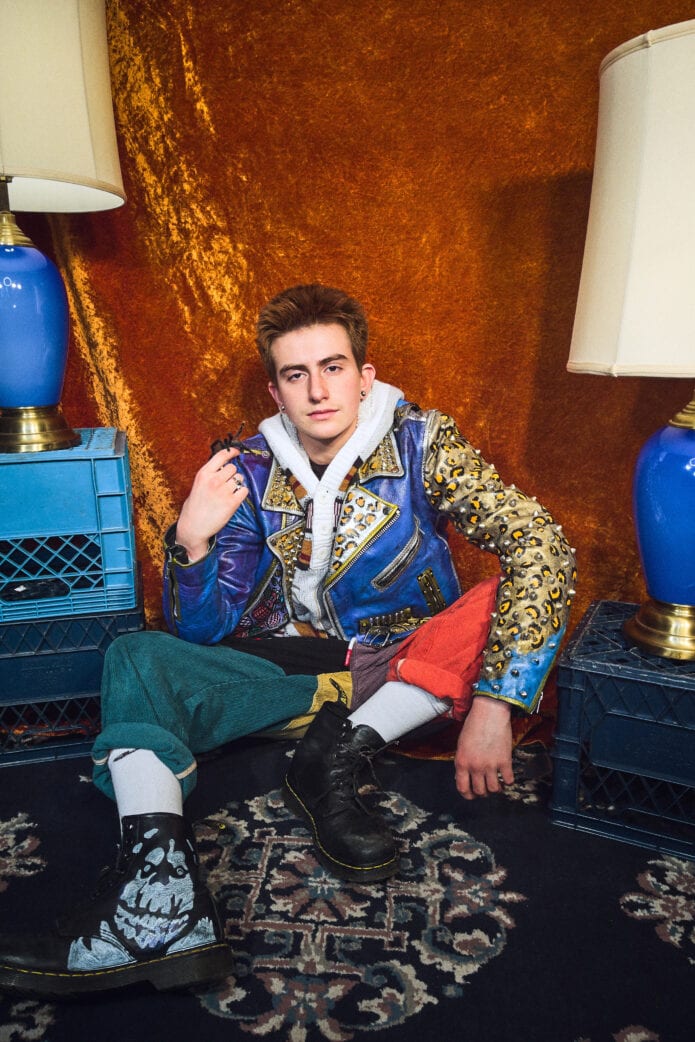 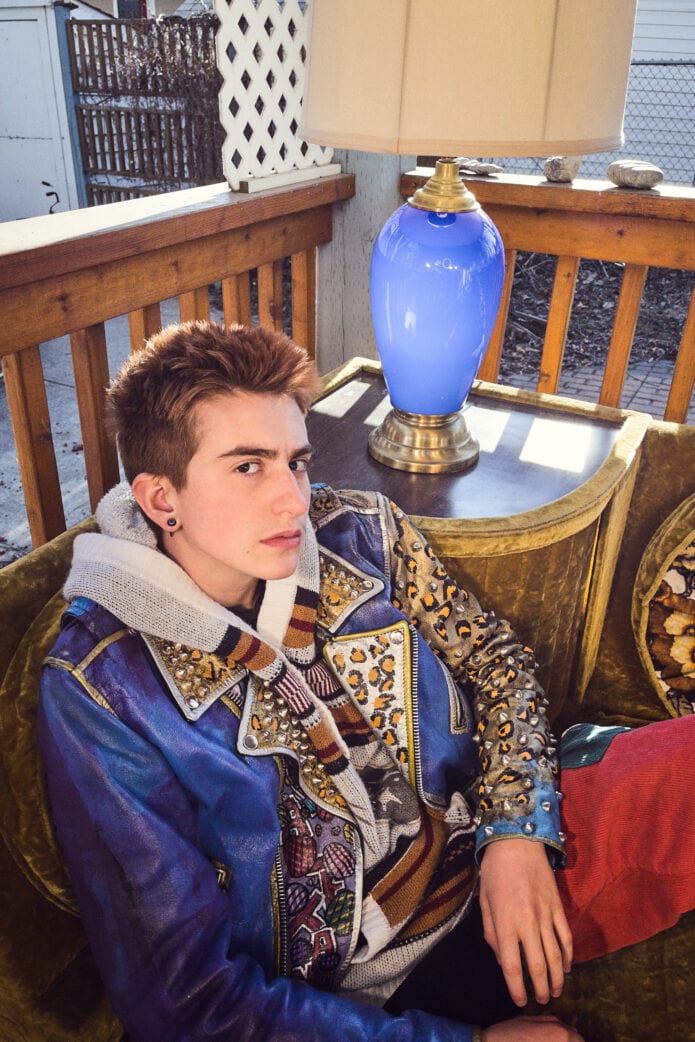 After making a name for himself online, the hyperpop star has had to re-evaluate his exposure to the internet. Admitting his fame broke the reality of “how toxic social media is” and why he’s learning to spend less time on the app. “I used to go through my comments and that’s not healthy – you get all sorts of people there.” As we see an increase of singers, from the OG Justin Bieber to more modern tales of ElyOtto and Claud, I ask the singer if he thinks online algorithms are backing music that is popular rather than well produced. “I’ve noticed with a lot of stan culture like hardcore fans and musicians that it really is about the streams. It doesn’t matter if the song is good or not and that’s sort of freaky,” he tells GAY TIMES. “The fact that someday we might not even be recognising genuine talent. I would say I’m talented. I don’t really display this through my style of music. It’s hyper pop and the auto thing does it for me, but I can play the piano so I suppose that’s a little bit of talent.”

ElyOtto has become well and truly ingrained in the fabric (and sound) of TikTok. If you’re not familiar with his name, users will instantly recognise SugarCrash!’s zany, neon hues. For Elliot, social media (and his music) has become a trans-accepting space filled with friends, fans and community. “Music is a mask and also a window to show what you’re feeling. I feel like hyperpop is a very trans sounding genre where you can manipulate your voice and use all these crazy flashy synths, but it still feels authentic because of the lyrics.” As his profile online continues to grow, going viral can be much for any Canadian teen, but Elliot seems to have taken it all in his stride, even having a fanbase of followers mostly his age. “It’s totally weird! I’ve taken to affectionately calling them, the fans, Angels. I’ll be like ‘Hey Angel, today I came out with this new song’,” he replies on the call. “I’ve actually made friends with a lot of my fans in real life. I’ve had people that were my fans before my friends and now we eat lunch together every day. It’s weird, but I don’t feel superior to anyone so I don’t feel strange calling people fans.”

Elliot has cultivated a unique space online — a TikTok haven where users can be exactly as you are, and, for many, it’s a surprise to learn their favourite viral teen is also trans. 17-year-old Elliot doesn’t shy away from his transness online either, the star confesses in one video about his anxiety of how testosterone will change his vocals when singing and, in another, he reveals how his transness has fed into his work. I ask the SugarCrash! singer why he chooses to speak about his trans identity online. “I know it could mean a lot to some kid that doesn’t have access to trans resources. I just want to let people know that they’re really not alone like I’m here too,” he explains. “I want to support people in that. I want to educate people to understand that we’re cool and we can make good music and we’re people too.” As part of the budding LGBTQ+ community online, Elliot was pleasantly surprised by online user’s reactions to his music, but also his personality. “People like me! I know that’s stupid, but I really was not expecting that at all!” he laughs. “People will offer the kindest words and not even put a second thought into it because I have helped them through my music so they want to just thank me. I was never expecting any thanks at all. I wasn’t even expecting the song to get popular, so it was pleasant and shocking, and it really brightens up my day to see people like that.

Soon enough, we slip into a conversation about trans artists and how few of them break into music. But with today’s new platforms, Elliot eagerly agrees that trans artists are finally starting to get the visibility and opportunities they deserve. “Artists like 100 Gecs, Kid Trash and even myself are rising to the top right now,” he says enthusiastically. “We are getting a ton of recognition from everyone and I feel like that will allow people to connect to the trans community more and open up doors for acceptance as well as recognition.” Without missing a beat, the singer also reels off his go-to favourite act of the minute, Laura Les. “I listen to her constantly and even though she’s a trans girl and I’m a trans boy, I can really relate to what she says in songs like How to Dress as a  Human. It just really touches my heart and I just absolutely love her sound. She’s authentically hyperpop and what she is doing is amazing.” Keeping the eclectic hyperpop spirit alive, Elliot is ready to keep pushing the boundaries of his sound. “We released an incredible remix of SugarCrash! featuring Kim Petras and Curtis Waters. I’m so excited,” he tells GAY TIMES. “ It gives me goosebumps every time I listen. It’s so freaky. I didn’t think that anything I could make would sound so good.” Although SugarCrash! might’ve worn Elliot down, he hopes his fans are still enjoying the music and are ready for more. “I’m really hoping people aren’t as sick of Sugarcrash! as I am,” he jokes. “This remake is just refreshing. It deserves to be heard because Kim Petras and Curtis Waters put a lot of work into it and added such amazing energy to the sound. I want it to be heard.” With the revamped collaboration now out, the Canadian artist reveals he’s working on a debut EP which will be coming out later this year.

You can listen to SugarCrash! on Apple Music and all available streaming services. 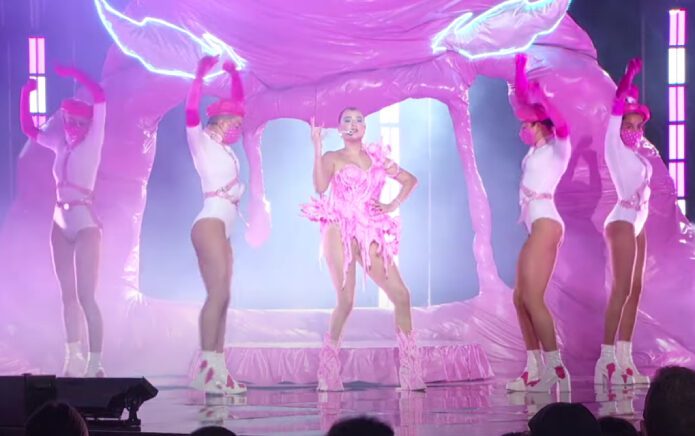