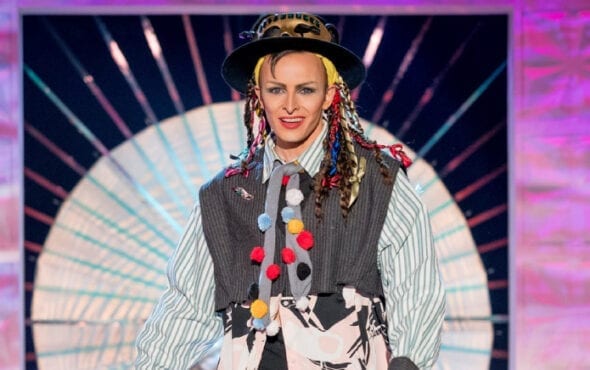 “When you actually listen to her speak and the way she sings, there’s a lot of comedic ways that I could take it.”

Veronica Green has revealed who she would’ve impersonated for Snatch Game.

On last week’s dramatic episode of RuPaul’s Drag Race UK, the queens were forced to sashay away from the series due to concerns over the coronavirus pandemic and were unable to return to the werkroom until seven months later.

Sadly, Veronica couldn’t join her sisters due to her positive diagnosis for COVID, with RuPaul telling the contestants that she has an open invitation for the show’s upcoming third season.

Following the episode, we spoke with the star about her shock exit and her plans for the franchise’s staple maxi-challenge, Snatch Game, which sees the contestants impersonate celebrities in a parody of Match Game.

“There’s a few choices that I could’ve done. I would’ve loved to have done… The thing is, my choices are quite boring, really! I would’ve done somebody like Emma Bunton or Holly Willoughby or something like that,” she told GAY TIMES.

“Thinking out of the box, I thought of maybe Jessie J.”

Veronica also considered British businesswoman and personality Hilary Devey, as she’s impersonated the star in the past, but thought twice about the decision after Alan Carr “clocked” her goth-like Devey wig in the morning talk show challenge.

She continued: “He said it on the runway and I was like, ‘Oh my god, that’s actually my Hilary Devey wig,’ so I was like, ‘I’m not doing Hilary in Snatch Game anymore!’” When we told Veronica that she’s got the vocal range for Jessie J, as witnessed in her triumphant performance in Rats: The Rusical, she responded: “She’s a real character. When you actually listen to her speak and the way she sings, there’s a lot of comedic ways that I could take it. So, who knows? Maybe I’ll be doing Jessie J.”

Veronica also revealed that she has conquered the coronavirus and is currently “in good shape,” but was distraught over leaving for reasons out of her control.

“When I was told, I burst into tears. I was absolutely devastated, and I didn’t know how to process the information,” she explained. “Eventually, it was just, ‘Oh wow, that’s it. That’s my journey in the competition over.’”

You can read Veronica’s exit interview with GAY TIMES in full here.