Crowdfunding campaign launches to save the Stonewall Inn from closure 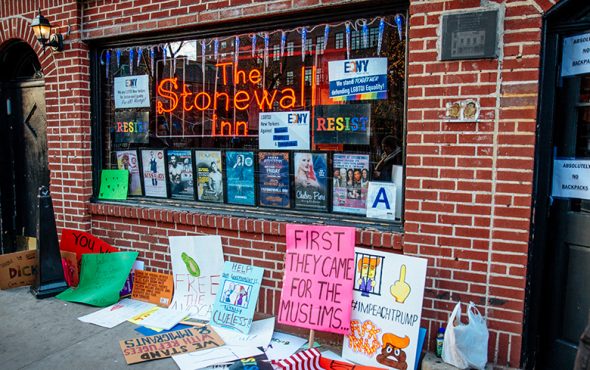 LGBTQ+ venues have been hit hard during the coronavirus pandemic.

The Stonewall Inn, the site of the birthplace of the modern LGBTQ+ rights movement in the United States, has launched a fundraiser as the ongoing coronavirus pandemic could force it to permanently shut its doors.

In a piece for GAY TIMES last year, Philip Baldwin wrote about its historical significance: “When police raided the Stonewall Inn, during the early hours of 28 June, in an exceptional act of bravery, the patrons fought back. Many of these people, our queer brothers and sisters, have now quite rightly gone down in history as pioneers of the LGBTQ rights movement.

“They included Marsha P Johnson, Stormé DeLarverie and Sylvia Rivera, trans or gender non-conforming individuals. The clientele also included homeless youths and sex workers – many of whose names we will never know. Rebels and revolutionaries form the roots of our movement. This is a core part of our identity.”

In a fundraiser on GoFundMe, which at the time of writing has raised over $194,000, the bar’s owners say: “We are reaching out because like many families and small businesses around the world, The Stonewall Inn is struggling.

“Our doors have been closed for over three months to ensure the health, safety, and well-being of patrons, staff and the community. Even in the best of times it can be difficult to survive as a small business and we now face an uncertain future.

“Even once we reopen, it will likely be under greatly restricted conditions limiting our business activities.

“As you may be aware, The Stonewall Inn is the first national gay historic landmark and the birthplace of the modern day LGBTQ rights movement.  We celebrate and pay homage to those individuals who first stood up for gay rights and sparked the Stonewall Riots.

“Those brave souls who first stood up for their rights and the rights of others, triggered a global movement that continues to be celebrated world-wide via gay pride celebrations and parades.”

The fundraising mission to rebuild Beirut with Pride

It adds: “Today, we are asking you to help Save Stonewall!  The Stonewall Inn faces an uncertain future and we are in need of community support. The road to recovery from the COVID 19 pandemic will be long and we need to continue to safeguard this vital piece of living history for the LGBTQ community and the global human rights movement and we now must ask for your help to save one of the LGBTQ+ communities most iconic institutions and to keep that history alive.”

A separate GoFundMe page to help pay the bar’s staff has raised over $33,000.