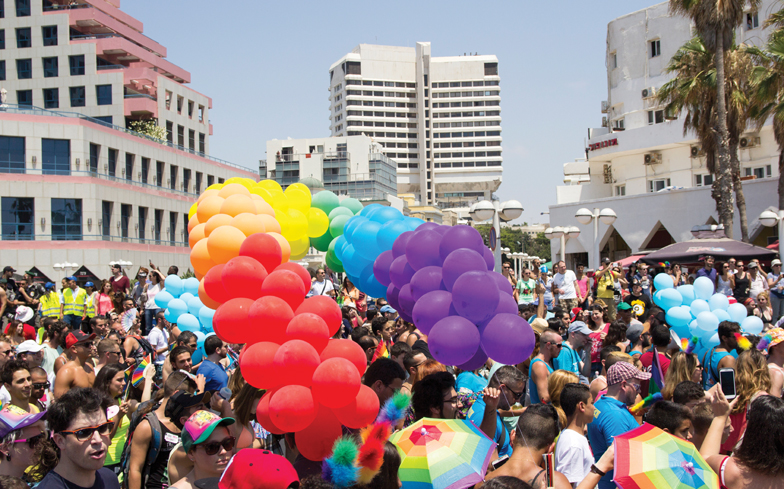 “Why visit Israel?” That’s the question my friends kept asking me, and I even asked myself.

For a warm break from the cold UK, you can fly more cheaply and quickly to the south of Europe, at least while we’re still in the EU. But even then, the security at the airport would be nothing compared to Israel’s. It’s the toughest in the world. And it can be expensive when you get there. So why go? Because Israel is, undeniably, a country like no other. It might not be for the average traveller, but what you find when you step out of the airport more than makes up for any inconvenience. A lot of readers may have already been, others will no doubt have considered a trip because they, like most LGBTQ people, will be aware of Israel’s huge gay pride parade in Tel Aviv, held every year in the second week of June.

Israel seems to really embrace its gay community, in contrast to literally every other country in the region. It has a fascinating history of gay liberation and acceptance, culminating in a lively gay community in Tel Aviv. As anyone who’s been can tell you, Tel Aviv Pride week is one of the biggest and best in the world. Over 200,000 people attended in 2016 and 2017. This year could be even bigger.

But whether or not you choose to go for Pride, there’s a lot more to Tel Aviv. It’s one of the youngest, most vibrant cities in the world. It spreads out along the coast, where the Mediterranean waters are never far off 20°C. You could spend a day walking along the seafront promenade: wide pavements with golden sand beaches to one side, and trimmed grass on the other. There are harbours at both ends, and places to eat all over where you can watch boats sway and people surf. It’s fascinating to witness the mix of cultures: young, fit, secular Israelis swimming and sunbathing next to more religious people covered head to toe, while relaxing on the beach. I was surprised by how much history there is in Tel Aviv. Some go as far as to say it’s where Christianity truly began. In the old neighbourhoods you can retrace the footsteps of Jesus’ disciples, but you’re never far from some highly modern architecture, like the clear skyscrapers that mirror the ever-blue skies. I recommend two things: a walk in the old Jaffa district, where you can see ancient walls incorporated into modern jeweller’s boutiques, and a trip to the flea market, where you can find; fresh fruits, sweets, cheap souvenirs, and all those random items like novelty phone cases, knock-off designer wear, and photoshopped pictures of celebrities. Things you didn’t know you needed before you saw them.

Food here, like in the rest of the country, is rarely cheap, but always of a high quality. Israeli cuisine brings together the best of the places where so many Israeli’s came from: Europe, North Africa, and the Middle East. Vegetables tend to be a part of every meal, as does hummus. As a vegetarian, I never struggled for choice. While there are always a variety of cakes, pastries, and indulgence foods, it’s easy to see how you could come home in better shape than when you left – especially if you walk a lot.

Israel has some of the best hikes you can find. In the Dead Sea region, where people famously float in the super salty waters, you can take a trip to several ancient sites and hike to the top. The most famous is the Masada fortress, a hilltop settlement from Roman times, but I was most impressed by Ein Gedi, a desert oasis. There you can see types of rabbit and goat hopping around on rocks, while you take a slow incline between cliffs to the many pools of water coming from David Waterfall. It’s breath-taking. At the base, you stand over 1,000 feet below sea level, and 2,000 feet below its plateau.

While Tel Aviv is a vibrant city with clubs, bars, and restaurants, the Dead Sea region is its opposite: isolated, quiet, like one big spa. Many of the hotels in the area double as health spas, with mud treatments, pools, saunas, and solariums common. As with everywhere in the country, there is a lot of culture to be discovered, if you’re interested.

Nowhere, perhaps in the world, has as much cultural and religious history so densely packed into it as Jerusalem. It’s the holiest city in the world for Jewish people, most Christians, as well as the third most holy for Muslims. If you have any interest in ancient history, or the story of Jesus Christ, go to Jerusalem and walk the Via Dolorosa, a path claimed to be the same one Jesus took on his final days before crucifixion. If you don’t have a guide, take a guidebook so you can understand all the different communities nestled together. Like in all of Israel, there are many cultures, all living next to each other, contributing different beliefs, foods, and fashions, and making this a country like no other.