When a hotel took over an entire town in Brazil… 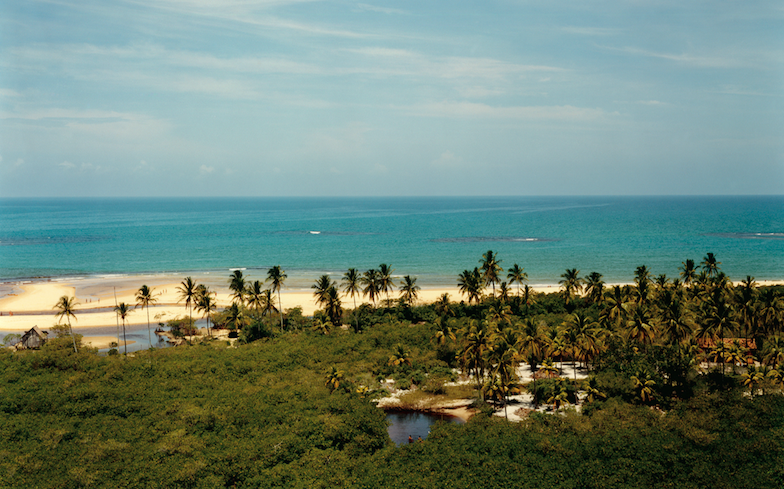 “Passion is the driver of everything in Brazil,” says Bob, the bisexual owner of UXUA (pronounced ‘oo-shoe-er’) Casa Hotel and Spa in Trancoso, in beachy, hippyish Bahia.

We’re lounging in the beautiful grounds of the… not really hotel because accommodations are scattered all over the tiny town, on a lazy rainy day, weather that we’ve chosen to ignore.

“Brazil is a beauty factory,” says Bob, an American, maybe in his 40s, in a neon vest, some pyjama-style pants and high-tops as he tickles the English Bull Terrier he drags around with him.

Bob met his partners in this amazing project – Wilbert a creative director (so imagine how lovely this place is!) and Peter, a 6’7” man mountain, both Dutch – while working in the design department of Diesel in Milan.

“Sexuality here is open and fluid and welcomes all races,” he goes on, sipping on one of the many espressos he powers his days with. “No one would bat an eyelid at same-sex couples holding hands. We are non-conformist and rebellious and love to break the rules.” Which is why the election of Bolsonaro has been such a slap in the mouth. Still it gives you something to rebel against, not that rebellion is in the air in this lovely little place, hand-crafted by Wilbert using reclaimed materials and local artisanal pieces.

As other surrounding properties came up, if locals didn’t want them, the trio would add them to their list and give them the UXUA treatment. And what a treatment that is! Your room could be a treehouse or a little casa with real-life Brazilian neighbours, all with a relaxed, make-yourself-at-home atmosphere that is hippy-luxe with service so seamless you don’t even realise there is any service.

Breakfast materialises in the form of a tropical buffet while big outdoor tables looking onto the courtyard is where you’ll get stuck into seafood stews and lobster and prawns and anything that’s fresh and delicious, all to the sounds of bossa nova or maybe some classic rock. Frankly, if it was any cooler, I’d have put a bottle of fizz in it to chill.

You can lounge in the green quartz pools, book yourself a spa treatment, have a go at copoeira, you know the Brazilian martial art or just swing in a hammock with your book, sit out on your open-air living room, have a dip in your private pool… They’re even happy to have you hang around in the kitchen and pick up tips as they get lunch ready.

Outside of the property, things are relaxed and nature-based, with none of the danger or excitement you associate with Brazilian hot spots like Rio. The locals seem to be into playing football (well, it’s Brazil) and playing live music and, obviously, going down to the beach. Down on the wide, sandy beach you can get involved in beach volleyball or just crash out on a towel.

And it’s not totally good-weather-dependent either – that same rain-swept day, we decided we’d take some beautiful white horses down to gallop on the beach while in the background surfers took advantage of the choppy seas to ride some serious waves. On nicer days, you can have your lunch at the UXUA Praia Bar on the beach itself.

The vibe is all very 70s-Ibiza, very Bianca Jagger in a white crocheted bikini reading something clever, very friendship bracelet and seashell necklace.

“We don’t have a gay scene here,” says Bob, giving his dog another little tickle. “Every bar is gay, straight, lesbian, whatever. We are non-conformist and rebellious. Let’s break the rules!”