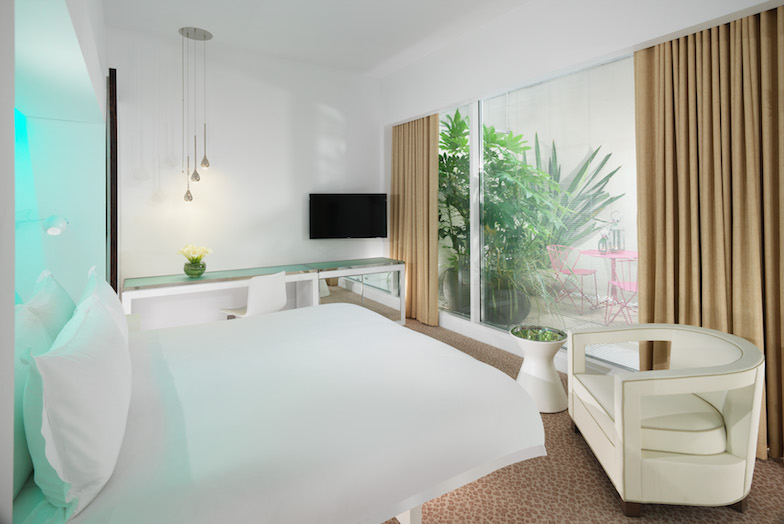 Probably the first smart modern hotel in all of London, back when Ian Schrager had his name on all the world’s smart modern hotels, it was an instant smash hit because of its surreal décor (big gold tooth stools, anyone?), its sleek whiteness, its mood lighting so from the outside you could see that all the rooms were lit up different colours according to their inhabitants’ moods (pink or blue or green or yellow) and its Asia de Cuba fusion restaurant and this back in the day when no one even knew what fusion was.

Now things are different at St Martins Lane. The gold tooth stools are still there but the Light Bar has been made into a very snooky, low-lit place. It’s now called Blind Spot because it’s hard to find a way in (look for the golden hand sticking out of the wall). And so to the plants. They’re not in the lobby, because any fool can do that. No, they’re in certain designated rooms that have been handed over to Michael Perry – also know as Mr Plant Geek, if you’re taking notes – for a botanical makeover and they are lovely.

In ours, we walk in and right there before you even get to the actual room bit there’s a little glassed-in outside patio thing crammed with green. Just a little brightly coloured table and some chairs and green. Perfect for breakfast. The design of rooms at St Martins Lane was always known for its quirkiness and that still slaps you in the face. Walk past a sort of cube in the middle of the space – you can go round it both ways – and you get to the room proper.

But before you get there, you discover that the cube is actually a loo, a shower, some storage and that plants have popped up all over the shop. Clumps of small ones and maybe a big one.

The thinking – and there’s probably even some science behind this – is that plants suck in the carbon dioxide that you breathe out and swap it with oxygen, which you then breathe in, making it the perfect tit for tat and leading what is apparently scientifically a better night’s sleep.