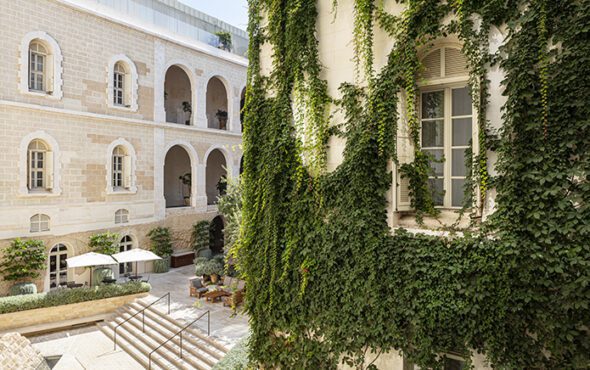 The Jaffa hotel is, of course, situated in the ancient port city of Jaffa – the Jaffa that features in the Bible and everything (apparently it was built by one of Noah’s sons after The Flood) and the Jaffa that is just a 10 minute car journey from the bustling modern city of Tel Aviv.

Why is The Jaffa so beautiful? Well, currently one of the most famous new hotels in the world, this breathtaking passion project has so much love and attention being poured into every last detail thanks to the immaculate interior designer, John Pawson. It’s a 19th century French hospital converted into a luxury hotel, the basement of which being transformed into the current ground floor.

When we arrive, we walk down a narrow corridor with mirrored ceilings and emerge into a huge reception packed tight with art that definitely cost a fortune – the Damien Hirst swirl painting alone is worth £3 million. Part of an ancient wall they found is right by the coffee bar, and the courtyard of the huge arched hospital – with original signs still intact – is a lovely view out the floor to ceiling windows. The swimming pool, with its views onto the historic hospital and an old Catholic school, is the best in town. Our favourite part of the experience was definitely the serenity of L.RAPHAEL Spa. In the main hospital part of the building, the ceilings are so high you could strain your neck just from looking up. The interiors that were cleaned up by John Pawson are minimalistic and elegant, the huge room has a mirror cube that houses the bathroom and, somehow, a television that you watch through the mirror itself. The windows were so big we felt we could see the whole city through them. In the modern block the same slick, minimal aesthetic brings big beds, clean lines, marble bathrooms and Arabic-style blinds that throw a mean shadow on floors. Because of the ease of the Tel Aviv-New York connection, most of the guests seem to be New Yorkers – and the food has been designed to appeal. There’s a proper New York-style deli called Golda’s, where you can get your pastrami on rye or your mac ‘n’ cheese and a main restaurant called Don Camillo, a classic American/Italian restaurant with unexpected – but welcomed – middle eastern touches. The staff, by the way, are so funny and friendly, we even got shots (and LGBTQ+ clubbing advice) to go with our starters. For drinks, try The Chapel, a late-night bar in the old, you guessed it, chapel which has been restored so sensitively it feels like you’re boozing in an incredibly stylish church.

The Jaffa phenomenon is in full effect. Attractions like Shuk Hapishpeshim flea market, Museum of Antiquities and local boutiques are just a short walk away from the hotel. Explore the ancient port city and discover the local culture. The flea market, where you can get everything from mid-century furniture to a prosthetic leg, is lively and colourful. Try Puaa for lunch or cocktails: very cool, very now, quite LGBTQ+ staff-wise. All around it are emerging cool, designery shops, like Saga, which has its own café next door. And the for the LGBTQ bit, well Tel Aviv, which has the most bustling gay scene in the whole region (yes it does, Beirut!) is easily reachable.