It’s quite a juggling act, seeming respectable but being a little decadent around the edges. But if anyone can keep those balls in the air, it’s The Mayfair Townhouse. Well, their inspiration was local naughty boy Oscar Wilde. And other local naughty boy Alexander McQueen.

Based in a row of townhouses, which makes it feel boutique even though it’s actually quite a size, The Mayfair Townhouse is the latest succès de scandale from the Iconic hotel group, known more for their country piles than their pieds-à-terre. Right on Half Moon Street, where Oscar based his most famous play, The Importance of Being Earnest, Green Park is a two-minute walk in one direction, the luxury boutiques of Bond Street a five-minute walk in the other. So it certainly has location down. 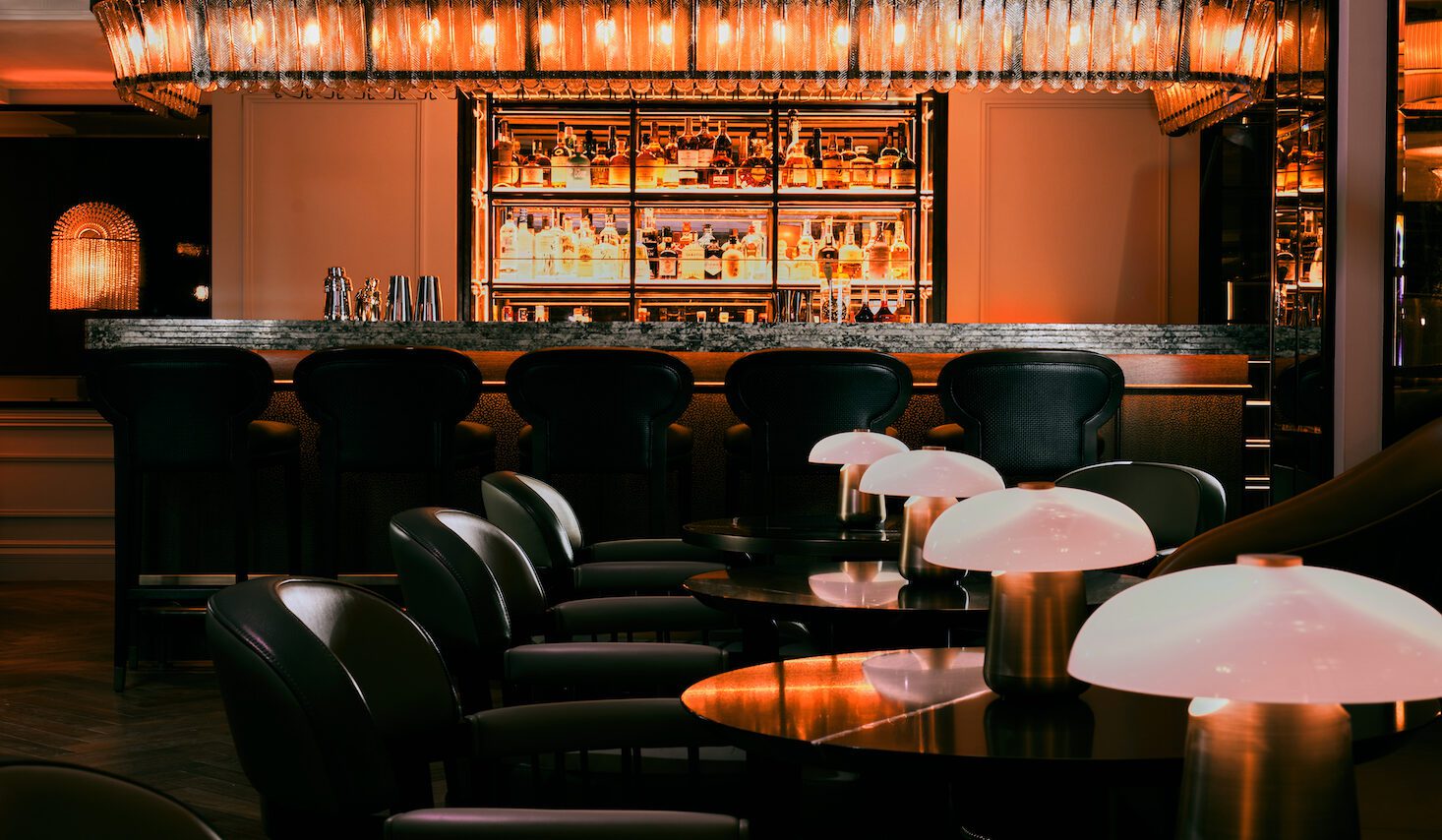 As you step in, it might run like a well-oiled machine in terms of check-in and the rest of it, but have you noticed the life-size peacock made of Swarovski crystals and real peacock feathers? And the staff may come over as slick professionals but the gold safety pin in their lapels is actually a nod to McQueen, whose studio was around the corner. It’s like the whole hotel is winking at you.

Step into the Dandy Bar and the winking adds a nudge thanks to bar staff whose personality infuses the whole place with fun. We sat up at the bar, chatting while they made us a lethal line-up of cocktails and not the usual ones either: something made with the Queen’s favourite tipple, Dubonnet, which we somehow have never had before. 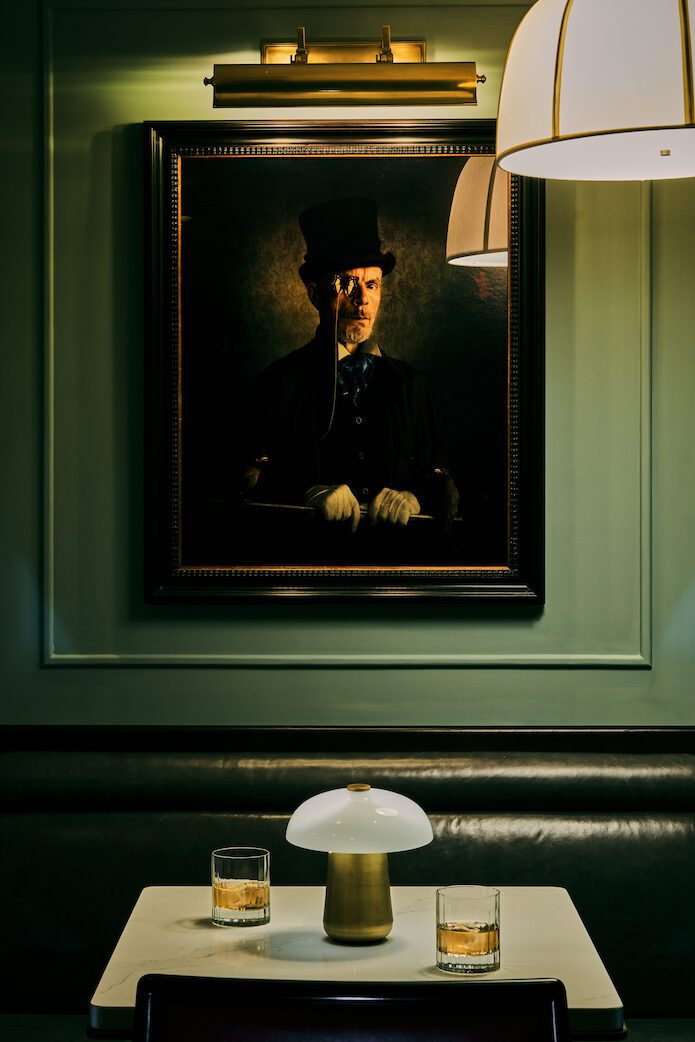 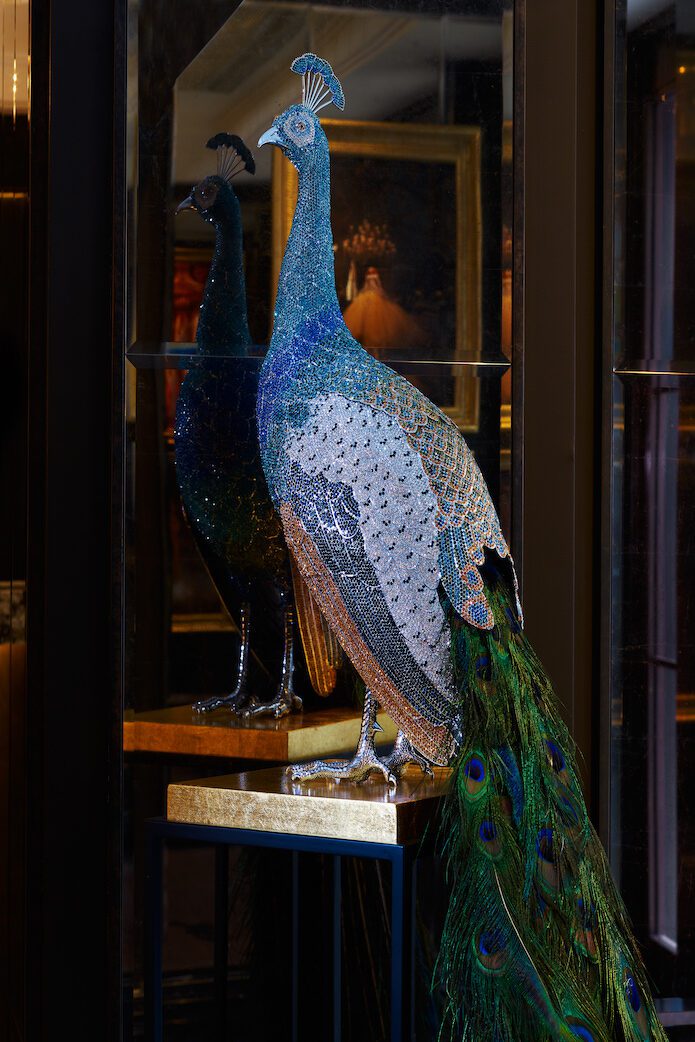 At opening, this was where food was served but downstairs there is a huge and sexy restaurant, broken into areas – like the hotel itself – so it all feels intimate. Deep sage walls, strange portraits of the family who used to live in at least one of these houses – whose eyes seem to follow you around the room – and deco touches give it all a slightly louche atmosphere, nowhere more so than in the little den, an alcove off the main room, scarlet in colour and lined with strange fox-themed pictures. If you ever need a secret snog with someone inappropriate, this is your spot.

The menu also keeps various plates spinning, veering from lobster curry to a range of burgers (including vegan!), padron peppers, halloumi fries… even ‘invisible chips’, which don’t actually arrive but where your money goes to charity. 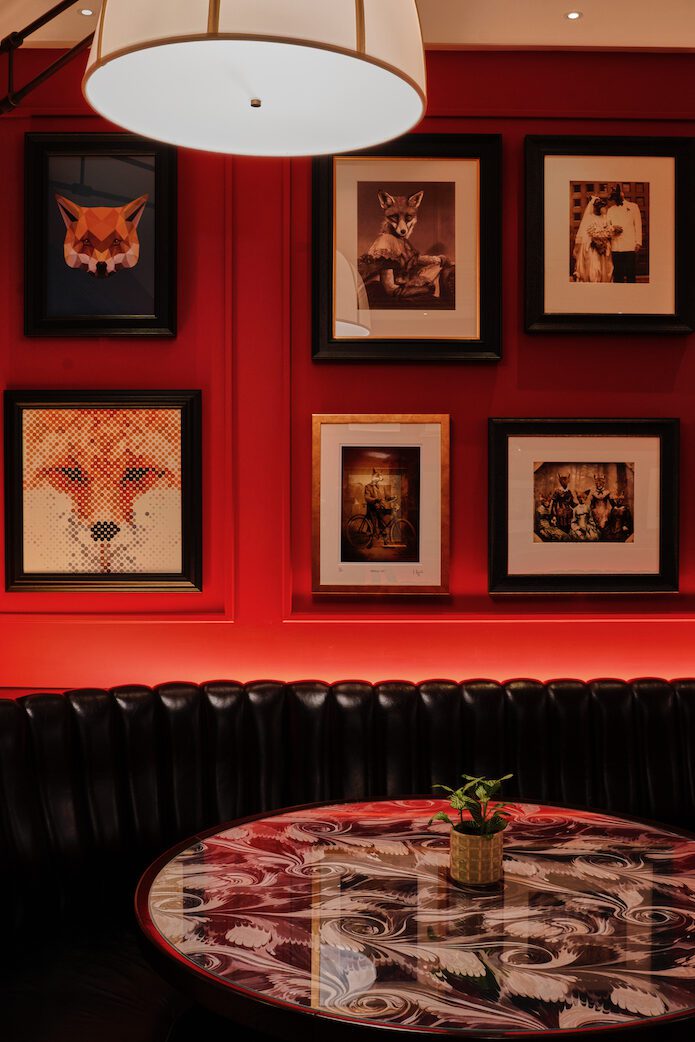 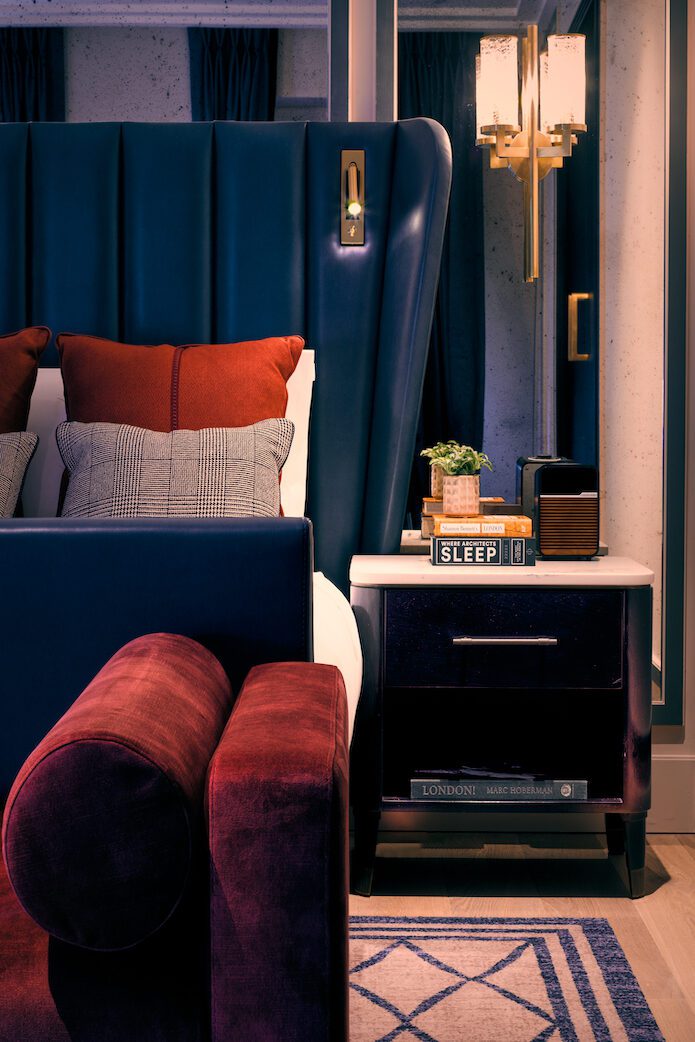 Upstairs, the rooms continue the sexy-chic theme with colours that tend towards dark and dusky and lighting that is low and saucy, while bathrooms are just very, very expensive with amazing tiling and marble throughout. Nice. But what seems like straight-ahead luxury on first glance – curtains with deep borders and scarlet ties, deco-flavoured furniture and cushions, cushions, cushions – is subverted by original art that is strange and delicious. It’s almost a nod to the fact that the rooms in some of these houses used to be rented out by the hour. 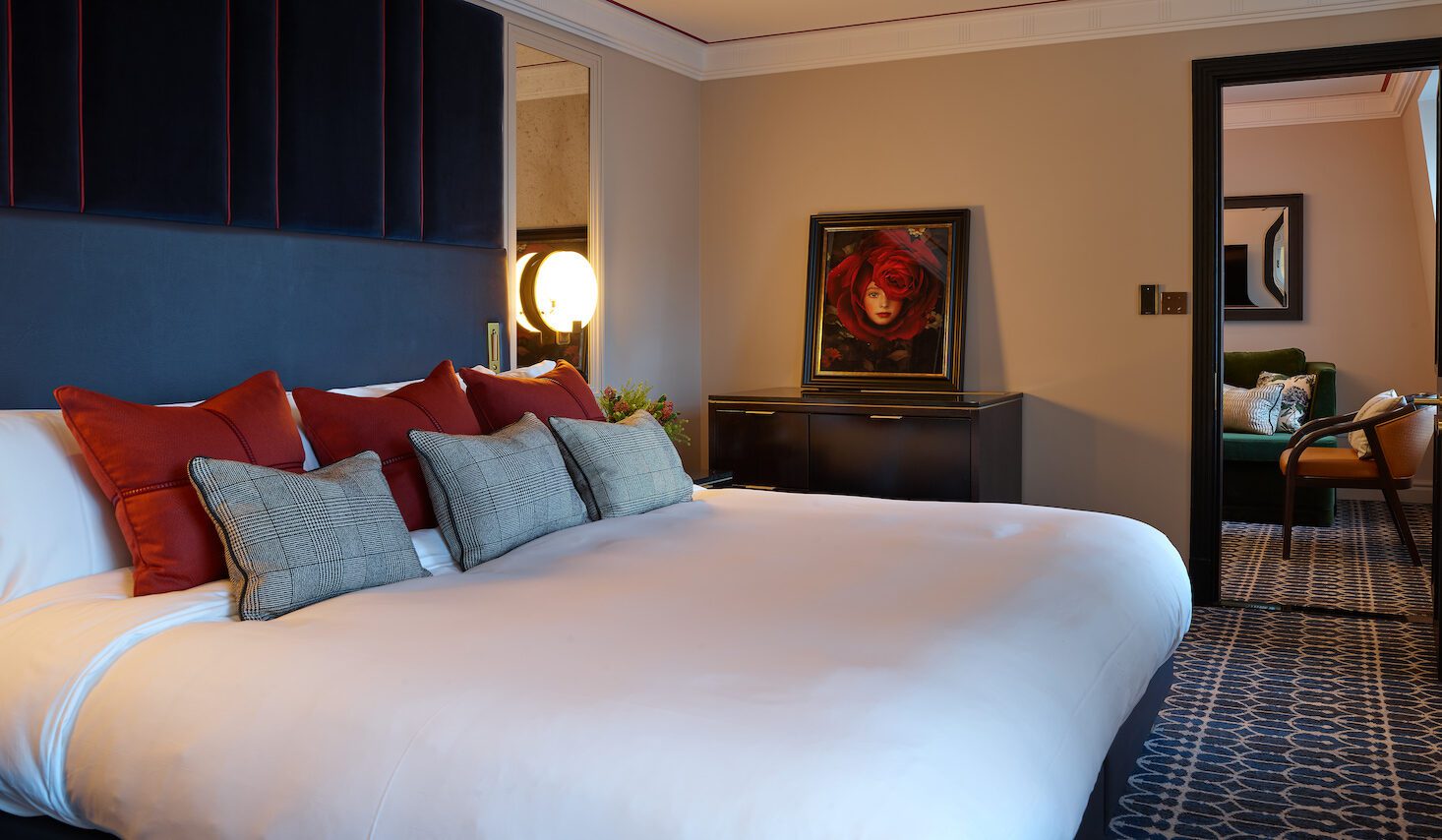 It’s a tough gig, opening a hotel in what you could think of as quite a stuffy part of town. People coming want the area, but they don’t want the stuffy. Then again, they don’t want it to seem out of place. The Mayfair Townhouse has pulled off the impossible: a hotel that’s smart and businesslike but with such a naughty side, you almost feel like it’s pinched your bum. 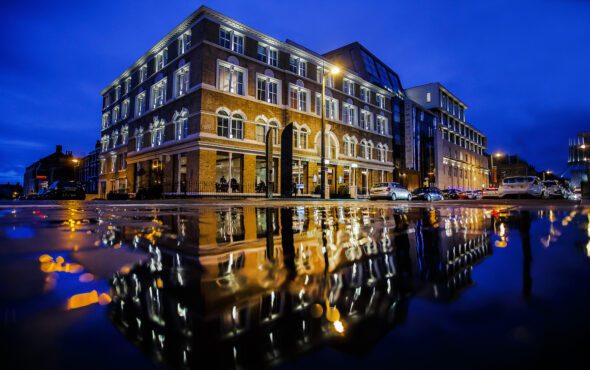