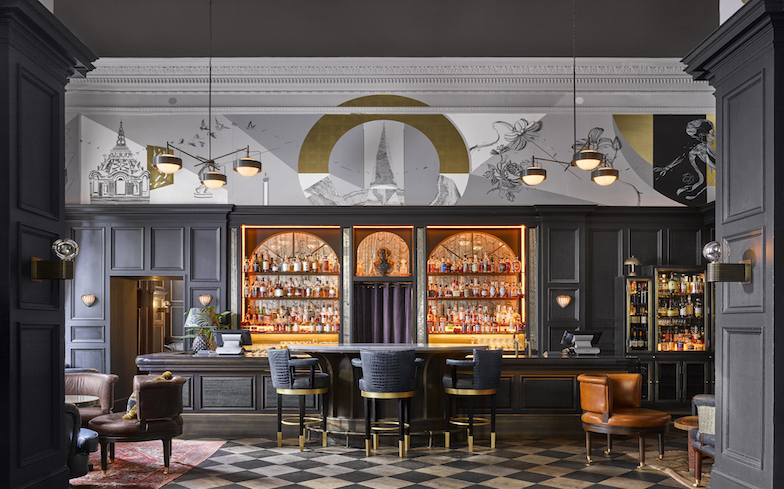 Are you into the origin of words? If so, you’ll be creaming your nick-nacks over Fitzroy, the name given by kings – particularly that Charles II, the randy bastard – to their, well, bastard progeny. Gave them the status, see, but none of the workload. And somehow it’s appropriate for this, the UK’s first glittering Kimpton hotel, all gorgeous-on-gorgeous and deliciously louche.

The erstwhile Principal (don’t ask, don’t tell) and, before that, one of those places you’d walk past and go, ‘Ooh, such a shame they don’t do something with that beautiful building,’ it is Kimpton’s second European property (after the lovely De Witt in Amsterdam) and marks a handsome entrée into the UK in a smarty pants part of town (Bloomsbury) where grand dollies of literature exchanged bons mots, doffed bonnets, and churned out Penguin classics in gorgeous Georgian houses overlooking perfect squares.

Lisa Stansfield is playing in the lobby (fourth album, the eponymous one) as we’re checked in by a Spanish lady – mad as a box of hair and game for a double-entendre and so excited about our stay we may need to defibrillate – and it’s a lobby full of opulence, grandeur and buffed surfaces that makes you think of money, surrounded by plenty of spots to spend yours.

There’s Burr & Co to your left (proper cool coffee house), Palm Court right there in front of you (proper afternoon teas) and, to the right through the all-drama purple drapes, Fitz’s (proper drinks), quite possibly the dandiest of all London bars and an homo-age to Oscar Wilde and his knowing, rascally ways where recherché jazz tickles the air and smart cocktails debauch it. And, beyond here, Neptune. More than a hotel restaurant, this is a playful, peachy, ocean-themed food-palace, designed by that clever Russell Sage with atmosphere and buzz in mind, where seafood dominates the plates – though they’ll happily rustle up a vegan tasting menu that isn’t just a chomp through all the clichés (not a burnt cauliflower or mushroom risotto in sight).

Ours is the Repton Suite, room after room after room and then, an all-marble crescendo of a bathroom with a free-standing roll-top (on a raised plinth for your pleasure) overlooking Russell Square – where bushes once ruffled with Paco Rabanne and tumescence, now with the aroma of triple-roasted Ethiopian from the de facto park caff – and a rain shower featuring its own (marble) seat with under-lighting and a mirror, set into the marble, which makes total sense. And the (marble) floor is heated, and the (lovely) products are by Azzi Glasser and real-life sized and un-nickable. And the rooms – dining to living to sleeping to bathing – come with a choice of five lighting concepts, each more scientifically flattering than the last. It’s all less showbiz than downstairs, no less beautiful, just more like a smart London flat owned by a design CEO. There’s not a whiff of mid-century modern which is so too now, but lots of tasteful little objets and a four-poster that is classy not whorey and literary masterpieces peppered here and there and, by my bed, Grayson Perry’s self-titled one. I could totally live here.

Other penny price-wise rooms are available and come in at much less swish – but that’s where downstairs’ fancy comes in. Kimpton Fitzroy is a playground of glitz, where a fin-de-siècle masterpiece of a building is enhanced, not suffocated, by its current custodian and their good-time vibe. I mean, I didn’t even mention the daily champagne happy hour. Where the ‘happy’ means free. I know, right?

Double rooms at Kimpton Fitzroy London start from £299 per room per night. www.kimptonfitzroylondon.co.uk