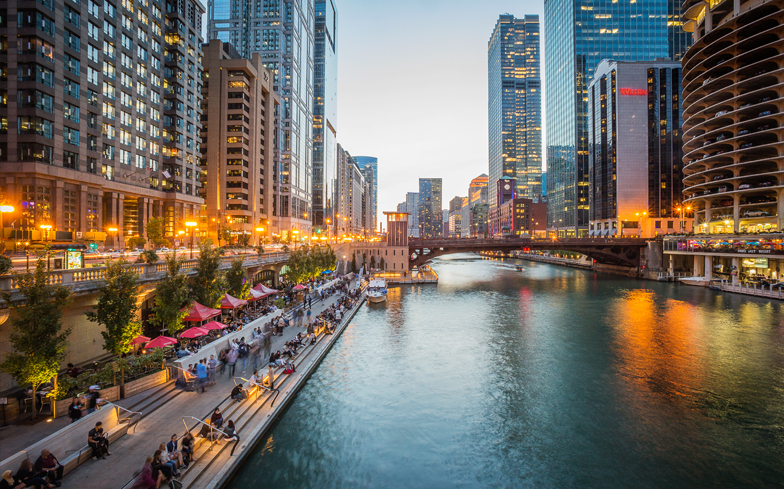 Illinois. One of those places you’ve heard of but can’t quite, erm, place. Well, think Chicago and spread out from there.

Illinois is the state, Chicago its most famous town and between them they seem to have pretty much everything covered from nightlife through cosy country retreats to road trips down perhaps the most famous highway in the world. And that’s before you even get to the LGBTQ stuff: diverse communities, cultural gems, quiet river towns with gays all over the shop and amazing festivals.

Start in Chicago (why not!), the huge, handsome city on the shores of Lake Michigan, which means there’s an actual beach and never mind we’re however many hundreds of miles from the sea. And not just the one beach: there are in fact 26 miles of public beaches, thanks to a policy to keep the lakefront free and easy to access. Sunbathe on the sand, swim in a lake that seems like the sea (well, you can’t see the other side), play beach volleyball, jog or cycle the public trails. Start at Hollywood Beach, whose official name is Kathy Osterman Beach after a Chicago politician who fought for gay rights in the 1980s, and take it from there. But it’s not all about fun in the sun as you’ll gather from the spectacular skyline that towers over the lakefront. Perhaps the most famous spot – in that you’ve seen it endlessly Intagram’d – is Millennium Park, home to the famous Cloud Gate (a.k.a. The Bean) that huge reflective sculpture by Anish Kapoor that you’ve seen a million times, only not so far in real life.

During the summer in Millennium Park (once you’ve explored the Art Institute of Chicago), you can grab a blanket and take in a free concert during the Summer Concert Series at the Frank Gehry-designed Jay Pritzker Pavilion or just take a stroll along the Chicago Riverwalk, a public space with pedestrian paths and restaurant patios for watching the world float by. And you can take a cruise along the river and learn about the architecture including some of the world’s first (and still most beautiful!) skyscrapers. Downtown Chicago may be exciting – much more exciting than many downtown areas, where offices often push any real life out – but Chicago is a city of diverse neighbourhoods, which is what gives it its unique flavour. Like Andersonville, one of several pedestrian-friendly areas, a super-cute little neighbourhood packed with independent boutiques and locally owned restaurants. Once home to most of Chicago’s Swedish population, Andersonville is now one of Chicago’s largest gay and lesbian communities with Clark Street and its bars and cafés and specialist shops making it a real draw come the weekend for both locals and tourists. The independent bookstore Women & Children First is one of the largest feminist bookstores in the country, while quirky shops such as Foursided and Andersonville Galleria specialize in handcrafted goods.

By night, Chicago is one of America’s most exciting gay cities with friendly gay bars such as Progress Bar stretching along North Halsted Street in an area known as Boystown, often voted the hottest gay area in the States because of clubs like Berlin – so much more than just a dance club with theme nights, 70s disco parties and drag shows. And that’s just scratching the surface of the famous Chicago party scene.

Boystown is also the setting for two of the biggest events of the Chicago summer. Every year, nearly 200,000 visitors line North Halsted Street for Northalsted Market Days, the largest LGBT outdoor street festival in the Midwest, then in June, the Chicago Pride Festival draws nearly a million revelers over a span of two weekends, culminating in a Pride Parade that celebrates its 50th anniversary in 2019.

But Chicagoans don’t wait until June to show their pride — Boystown is a welcoming, vibrant neighbourhood all year round with the unique Legacy Walk, an outdoor museum with biographies of the great and the good from LGBTQ history put on pylons lining the street so you can find out about everyone from Oscar Wilde to James Baldwin among other LGBTQ pioneers as you walk along or hang outside one of the bars.

It’s not all about Chicago, though. When you set off into Illinois, you run into towns like Galena, a historic little place on the banks of the Mississippi River, popular for romantic getaways where you can stroll along Main Street, and check out the independent boutiques, art galleries and restaurants in restored red brick buildings or visit Galena Cellars Vineyard for a tasting before turning in for the night at one of the cosy bed and breakfasts in the hillsides surrounding the town, such as the rustic Inn at Irish Hollow.

And then there’s Route 66 – aka The Mother Road – perhaps the most famous highway in the world, which starts in Chicago. Drive across 300 miles of Illinois through historic towns, past antique malls, diners and larger-than-life roadside statues, making a stop in the state capital, Springfield, where the Abraham Lincoln Presidential Library & Museum tells the story of the 16th President of the United States.

A bit of history, a bit of landscape, a bit of romance and a whole lot of partying – it’s probably time to get a bit of amazing Illinois in your life.