Formentera’s sexiest beach club is an absolute must 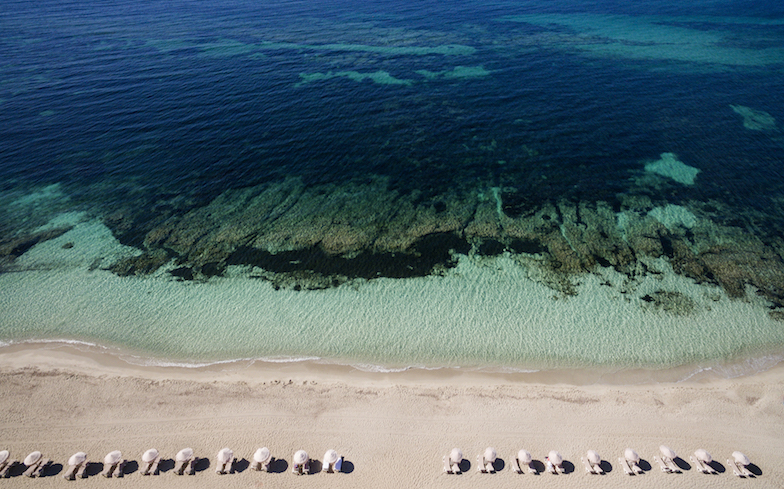 Anyone who is anyone and some people who are no-one at all know that it’s all about Formentera. Well, it is when you’re in Ibiza.

Which is where Gecko comes in, you sexy thing. It’s a hotel and beach club and it’s splayed across Formentera’s most beautiful beach, Migjorn, so there’s a major bonus right there.

And a bonus comes in other shapes and elegant sizes down at Gecko, starting with the hotel itself; Balearic Riviera-chic with major nods to the ‘50s – when all the right jet sets took the schlepp over, for the light and the food and the exclusive vibe.

Tthe rooms are all hushed chic lines of off-white and bleached woods and breezy blues, with floor-to-ceilings opening out to panoramas of nothing but deliciousness and the little things; a beach bag in case you’ve forgotten yours, flipflops made of bamboo because Havaianas are too obvious, a paddle board lingering by the door if you get the urge – are very cute indeed. We think our favourite room is the Gecko Sunrise, with the sunken patio opening out to your own private plunge pool opening out to Mediterranean views as far as your Oliver Peoples can see.

Having said that, it could actually be the Gecko Loft; vast, packed with mid-century loveliness, a terrace that’s ripe for boozy sundowners, what’s not to like, etcetera. Talking of etcetera, Formentera – famous for delicious white-sand beaches. And if you’re taking notes, Joni Mitchell wrote her best-known album, Blue (the one with California and A Case of You on it) while staying on the island back in 1971 and Bob Dylan used to live in the Cap de Barbaria lighthouse, a few miles south of Gecko, all of which might stand you in good stead were you to find yourself on Eggheads.

And it’s either a bike, or fifteen minutes on a moped, once you hop off the half-hour sail from Ibiza to La Savina on one of the speedy catamarans that depart every half hour in high season, which is all kinda cool, right? If you like your yoga, there’s Yiannas, Gecko’s in-house guru. His retreats – from three-day boosters to a whole Om-full week – pull in a glittering crowd of international drop-a-dress-sizers, or you can just opt in to his 90-minute sessions over on the deck by the sea of a morning, which are free for hotel guests.

If wellness is your thing, there’s an area dedicated to lots of it and it’s less of that icky, slightly cringey spa nonsense. More lovely outdoor massages right by the sand that will make you scientifically more beautiful/relaxed just in time for the golden hour.

Speaking of which, the Beach Club is where’s it’s at. So much so when people talk about Gecko, they add ‘the place to go’ at the beginning – and sometimes they even italicise the the. And it’s the place to go not only because it’s bossa nova and not boom-boom down by the pool, not only because they bring the cocktails to you as the sun sets over the blue-blue seas and that Med breeze tickles your hair just so.

The restaurant with its traditional Spanish nosh of gazpacho and paella and tartar de atún, just there, right by the bar, is probably the chicest place for lunch for miles around and sod it, we’re here already so we may as well spend the afternoon and if we stay way past our bedtime, so be it.