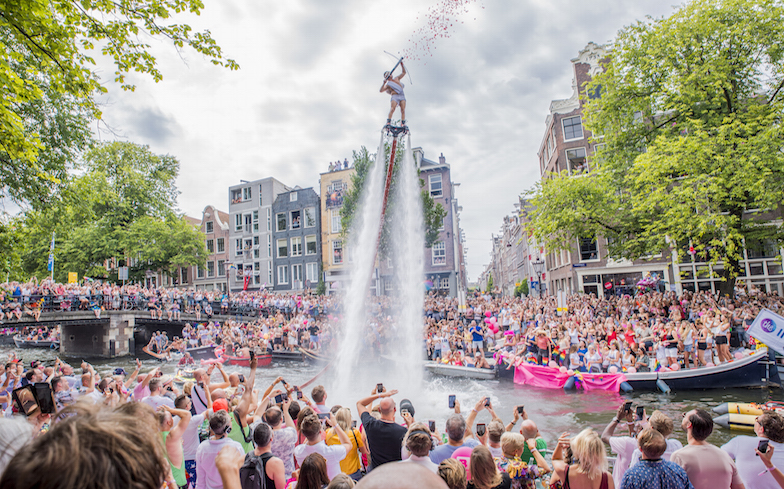 There’s nothing like Amsterdam Pride – they do it on the canals! – and there’s no better way to enjoy it than from the gorgeous Pulitzer’s even more gorgeous Pulitzer Pride Pink Deck. Because the canal’s right there! You’re looking at it.

With the absolute best view of the Canal Parade in town on Prinsengracht canal itself, you can enjoy the sight of a cavalcade of floats on boats as they chug past with dancing muscle boys, girls in next to nothing, drag queens with hair up to here, podiums that deflate when the float needs to get under a bridge, even palm trees that collapse and then spring up again on the other side. They even have scantily clad people zooming up out of the water on those jets-under-your-feet things! And while that’s going on, you’re at the best-dressed party in town being served unlimited (are they mad?) complimentary cocktails and wines and beers and spirits and even softies with some Pulitzer bites along poke bowl and slider lines coming round just to keep your stomach lined. And there’s entertainment on the deck itself if you ever tire of the Parade itself even for a moment. Dress up (or don’t! It’s your Pride), fill your boots and get ready for the greatest show in town. Any town! And seeing as you’re here – having slid into town on one of those easy-as Eurostar direct trains where you can get your own personal party started – why not bag yourself a room for inter-action freshen-ups? It’s the coolest hotel in town – a five-star luxury job made up of 25 interlinked 17th and 18th century canal houses – so we can’t think of a single reason not to.