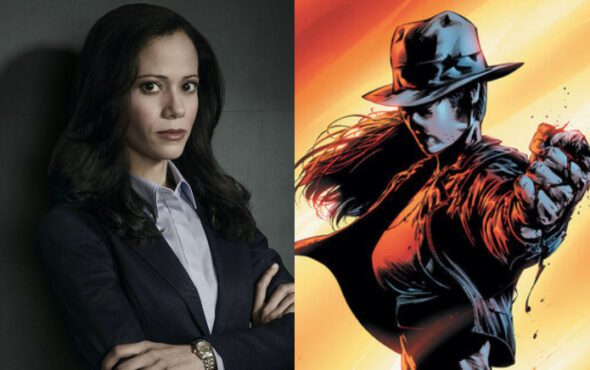 The Batwoman team has finally announced the actress set to play Renee Montoya, and she’s no stranger to Gotham City.

According to a report from Deadline, Victoria Cartagena will be joining the third season of Batwoman as a series regular.

Cartagena may be familiar to fans of the DC TV universe, as she portrayed Renee in the Batman prequel series, Gotham.

Taking to Twitter, the 36-year-old expressed her excitement to step back into the shoes of the beloved DC character.

“I guess [Renee Montoya] and I have some unfinished business. So very excited to join this new group of talented artists, writers & crew who are doing their thing over here,” she said.

She ended her tweet stating that she was “grateful, humbled and hype AF.”

I guess #Reneemontoya and I have some unfinished business❤️ So very excited to join this new group of talented artists, writers & crew who are doing their thing over here! They have welcomed me wholeheartedly! Grateful, humbled, hype AF… #batwoman #fullcircle https://t.co/eeNCmptT7v

Since the announcement, the cast have showcased their support and welcomed Cartagena with open arms.

Nicole Kang, who plays Mary Hamilton, wrote: “Oh my gosh AND a HUGE welcome for our #Reneemontoya comin in HOT to the Bat Fam can’t wait to see you kick a**.”

Earlier this month, The Illuminerdi first broke the news that Renee would be joining the Bat gang in season three.

The casting call described the character as a “former GCPD officer who left the department due to GCPD’s treatment of Gotham’s marginalized citizens” and is “in charge of the ‘freaks division’ in the Mayor’s office.”

It also described her as “virtuous and practical” and on a “personal and enigmatic mission to clean up Gotham.”

In regards to Renee’s connection with the characters, she did share a romantic relationship with Kate Kane in the comics.

With Kate leaving at the end of season two, there’s no word on if she will be romantically involved with Ryan Wilder, the current Batwoman.

Over the years, Renee has become a staple and beloved character in the DC Universe.

She first appeared in Batman: The Animated Series and has starred in numerous projects including the 2020 film Birds of Prey and the Fantabulous Emancipation of One Harley Quinn.

During the season two finale, vines were seen crawling out of the Gotham River, which some have speculated as a hint to a Poison Ivy introduction.

Ivy has recently been portrayed as queer in the comics and the HBO Max Harley Quinn series.

Batwoman season three is currently in production with a release date set for 13 October 2021.