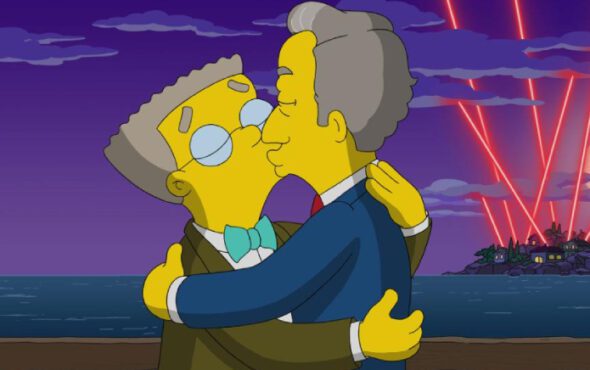 In the upcoming episode, titled Portrait Of A Lackey On Fire, Smithers (Harry Shearer) is set to start a passionate romance with the billionaire fashion mogul, Michael De Graff.

Since his groundbreaking coming-out episode in 2016, the character has largely been portrayed as single.

The official synopsis reads: “Smithers finds true love with a famous fashion designer, but will his new relationship destroy Springfield?”

Legendary actor Victor Garber, who’s known for his roles in Legally Blonde and Titanic, will be voicing the rich fashion designer.

The episode is also written by series writer Rob LaZebnik and his gay son Johnny, who was the inspiration behind Smithers’ coming-out storyline.

In an interview with the New York Post, LaZebnik described working with his son as “rewarding”.

“To be able to work with Johnny on this was, like, such a dream and to be able to see how truly funny and talented he is was just, you know, super fun and rewarding,” he said.

Johnny, who’s also a TV writer, echoed similar sentiments and referred to the creative process with his dad as “so much fun.”

“I know my dad is a comedy writer. I grew up with him — obviously, I know he’s a funny guy,” he said.

i can finally come out of the closet as a d’ohmosexual. watch a very gay episode of @TheSimpsons on november 21, written by me and my dad 😭😭😭 pic.twitter.com/RqlMcetIUv

“But actually getting to sit down and write jokes with him was so much fun. And there were some moments where I was like, ‘Dad, that’s disgusting — we can’t put that on television,’ which I didn’t expect to be saying because I’m usually the disgusting one.

“We now have this piece of content that we put into the world together that is a combined brainpower of the two of us.”

In terms of Smithers’ “whirlwind romance”, the two wanted to give the beloved character a relationship that wasn’t made into a “punchline”.

“So often, gay romances are a subplot or alluded to or shown in some kind of montage or as a punchline,” Johnny explained.

“And what I think I was really excited about, with this episode, we get to see — without spoiling too much — the beginning, middle and who knows how it ends of a gay relationship.

“Of really getting into the nitty-gritty of how gay people date, how they meet, what it’s like. That was really special to me to get to highlight characters who are not punchlines, who are fully formed.”

In a separate statement to the New York Post, Garber also opened up about the importance of the episode and LGBTQ+ storylines in media.

“I think it’s crucially important that these stories are acknowledged,” he said. “I haven’t played a lot of gay characters, but every time I do it, it brings back certain feelings I had as a young actor where I couldn’t be gay.”

The historic new episode is set to premiere on 21 November on Fox.