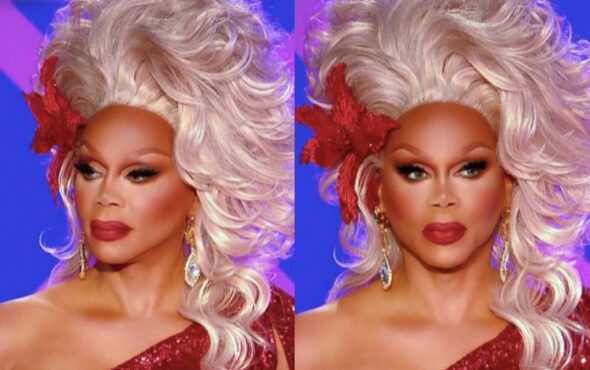 The latest episode of Drag Race UK left the nation gagged after RuPaul unleashed a brand new twist on the UK queens.

As the only two queens without a win, Kitty Scott-Claus and Charity Kase appear frustrated as the episode opens and the competition intensifies.

The mini-challenge sees the queens dress up as dogs and trainers in what is one of the franchise’s most bizarre moments.

After being awkwardly ditched by Charity, Scarlett goes on to win alongside Krystal Versace – making the two of them team captains in the maxi.

RuPaul tasks the queens with creating and marketing their own “Draglexa” personal assistant, a spoof of the in-home smart technology, Alexa.

Scarlett avoids picking Charity for her team and she ends up being absorbed by Krystal’s, with the groups then moving to the planning stage of the challenge.

Charity quickly takes the lead after feeling that Krystal isn’t stepping up enough as team leader, resulting in her quickly clashing with the rest of the group.

During RuPaul’s consultation with the queens, it’s clear that no one has a strong vision for the challenge – setting up the huge twist that’s to come.

As they film their commercials, Michelle Visage seems to be unimpressed with the contestants.

“So Draglexa pops out and helps you shit,” she asks Kitty’s team in horror.

As the queens get ready on elimination day, Scarlett and Kitty share an intimate moment as they do their makeup together.

Scarlett tells Kitty about her “tumultuous” upbringing, which she says is the reason she struggles to connect with people as an adult.

The London-based queen reveals that her mother has a disease called COPD, which means she has to live off an oxygen machine.

She states that after fighting with her mother a lot growing up, the diagnosis came as the two became incredibly close and now she is “desperately making up for lost time.”

On the runway, the category is “Expenny Henny” as the queens have to showcase an outfit that looks expensive.

After watching both groups’ commercials, RuPaul is not happy, to say the least.

“Ladies, brace yourselves because Drag Race is about to get real,” she says. “These commercials this week weren’t cohesive. Everyone was shouting and there was no originality there.”

RuPaul then reveals the shocking twist to the queens – there will be no winner of this week’s challenge for the first time in Drag Race UK herstory and, after last week’s double-save, someone is definitely going home.

She adds: “They were all what we’ve seen before. So, I’m disappointed. I’m really, really disappointed. Y’all are playing it safe! That’s not how you become the UK’s next Drag Superstar!”

After hearing the queens out, RuPaul asks the infamous “Who should go home tonight?” question.

Ella Vaday and Scarlett both choose Charity to get the boot, Kitty says Vanity Milan and the remainder of the queens go with Scarlett.

Scarlett doesn’t want to talk with the queens during Untucked and, after they all begin to tell her what they dislike about her as a group in what made for some very uncomfortable viewing, she eventually walks off the set in a moment of sadness and frustration.

RuPaul then reveals that Charity and Scarlett will be lip-syncing against each other for the second week in a row.

After a camp performance of Big Spender by Dame Shirley Bassey, Charity is given the pork chop and sent home.

“I’m really proud to be representing alternative drag,” she says in her final confessional. “I’m happy with everything I’ve done here. I just hope there’s somebody out there who sees themselves in me, and can be inspired by what I have brought to the show.”