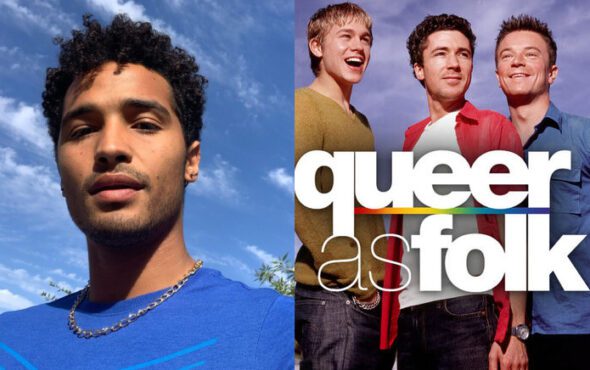 Peacock’s reimagination of Queer as Folk has announced five new series regulars who will be joining the show.

Earlier this year, Peacock (an NBC-owned streaming platform) revealed that it will be rebooting the British drama.

It will serve as a new rendition of the British series created by Russell T. Davies, which revolved around three gay men living in Manchester.

The success of the original show spawned an American reboot that was set in Pittsburgh and aired on Showtime in the early 2000s.

Despite being a groundbreaking show for the LGBTQ+ community when the American version started airing in 2000, it faced fierce criticism for primarily focusing on white characters and straight actors playing gay roles.

Now, the reboot has confirmed that Candace Grace, Johnny Sibilly, Devin Way, Fin Argus and Ryan O’Connell will be joining the fresh take on Queer as Folk.

Grace will play a non-binary professor as they navigate the transition from punk to parenthood, with Sibilly being a lawyer who is not doing as well as it may seem.

Way is said to be a charismatic but sometimes chaotic person who fears commitment but finds a reason to stay in New Orleans when tragedy strikes his community.

Dreams come true. Still in awe that this is happening. So excited to tell these stories with these amazing people for this ICONIC show. #QueerAsFolk https://t.co/lUz8DPYcGC

Argus is going to be a cocky teenager whose confidence fails to live up to his real-world experience, which he does not have much of.

O’Connell will depict a pop culture fanatic with cerebral palsy who is ready for independence.

The series previously announced that Jesse James Keitel will appear as a trans, somewhat-reformed party girl who is struggling to be an adult.

Set in New Orleans, the new rendition will follow a diverse group of friends who see their lives turned upside down when they experience a devastating tragedy.

“Dreams come true,” Sibilly said of his casting on Twitter. “Still in awe that this is happening. So excited to tell these stories with these amazing people for this ICONIC show.”

Stephen Dunn created the reboot and will also serve as a writer and executive producer on the show, which currently has no confirmed release date.