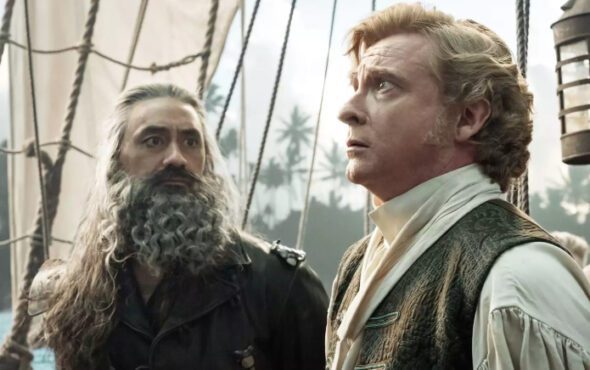 The creator of HBO Max’s LGBTQ+ TV series Our Flag Means Death has opened up about the show’s uncertain future.

If you’re a fan of comedies and pirates, chances are you’ve heard of the hit series Our Flag Means Death.

Set in 1717, the show follows aristocrat-turned-pirate Stede Bonnett (Rhys Darby) and his eccentric crew as they attempt to make names for themselves in the pirate world.

Along the way, the unconventional crew runs into the ruthless pirate Blackbeard (Taika Waititi), who is a bit different from the gruesome legends.

Although the show delivers fantastic comedic performances from Darby and Waititi, fans have particularly praised the show for its incredible LGBTQ+ representation.

From multiple queer love stories to non-binary representation, the series has quickly become a safe space for LGBTQ+ viewers.

Since the dramatic season finale aired on 24 March, HBO Max has remained silent on whether the show would be renewed – much to the chagrin of its dedicated fans.

In a recent interview with The Wrap, creator and showrunner David Jenkins revealed that he’s also out of the loop regarding the show’s future.

“Yeah, no news on that. It’s hard because of the analytics. And HBO Max. And then, you know, HBO Max has gone through a lot,” he explained.

“They’ve got this huge merger. People get scared for their jobs, rightfully so. And then their metrics are their own, they don’t really share.

‘They don’t really share their viewership data even with us. It’s pretty unclear what’s going to happen.”

A post shared by Our Flag Means Death (@ourflaghbomax)

Although the show’s future has landed in limbo, Jenkins also dished about the planned direction for season two – if it gets renewed.

“That’s the joy of working with an ensemble. And, you know, the tricky thing about making the first season of an ensemble comedy is you don’t really know what everybody’s superpower is,” he said.

“With a second season, you know everybody and what they do way better, and you can make it tailor-made for them.”

In an additional interview with Forbes, Jenkins said it would be “rough” if the show weren’t picked up for a second season.

“It’s a rough one to not pick up on after what happened at the end of it,” he told the publication.

“I hope they figure it out. I hope they want to do more. I know everyone in the show wants to.

“Just to go on [social media] and see it trend for like two weeks feels unreal. It’s so gratifying, even not knowing if you’re renewed, to see that people liked it that much.”

Since the show’s season finale, fans have flocked to social media asking the showrunner for an update.

One Twitter user wrote: “Hi [David Jenkins] if OFMD doesn’t get renewed, can you promise to at least let us know how their love story would end? I would be okay with any medium – a comic, a tweet, a full-length movie.”

In response, Jenkins said he would try to pitch to another streamer before going down pursuing other creative mediums.

Here’s to hoping that the cast, crew and the show’s LGBTQ+ fans get a second season renewal.