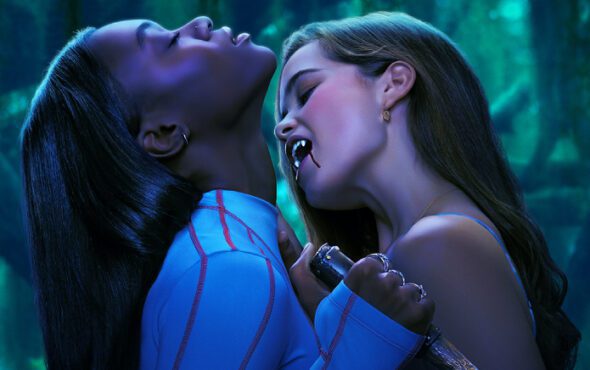 Netflix has released the first trailer for its new LGBTQ+ series First Kill, and it is to die for.

The queer-centric story follows a teenage vampire Juliette, who must “make her first kill so she can take her place among her powerful vampire family.”

Juliette then sets her sights on the town’s new girl Calliope – who comes from a long line of vampire hunters.

The synopsis adds: “Both find that the other won’t be so easy to kill and, unfortunately, way too easy to fall for.”

Since the casting announcement, LGBTQ+ fans have been eagerly waiting for more information regarding the series.

On 13 May, Netflix finally dropped the first trailer for First Kill, and it’s looking to be a romantic and bloody time.

At the start of the teaser, we see Calliope practising her monster-hunting skills in a well-equipped gym.

“I’m from a lineage thousands of years old of the best monster hunters to ever walk the earth,” she narrates.

The trailer then transitions to Julliette, who is struggling with her vampire identity.

“Even on good days, I still feel like I don’t fit in,” she says in her own monologue.

As the preview continues, the lines between Calliope’s monster-hunting family and Julliette’s vampire clan are drawn – with both groups encouraging the teen girls to execute their first kill.

However, instead of hating each other, the two end up falling in love.

The rest of the jam-packed trailer features intense fight scenes, an array of monsters and romantic exchanges between Juliette and Calliope.

Shortly after the trailer debuted, Hook took to Instagram to express her excitement for the series.

“‘Scuse me while I weep into a puddle….. FIRST KILL TRAILER HAS OFFICIALLY ARRIVED,” she wrote.

Luckily for fans, the eight episode series is set to debut during Pride Month on 10 June.