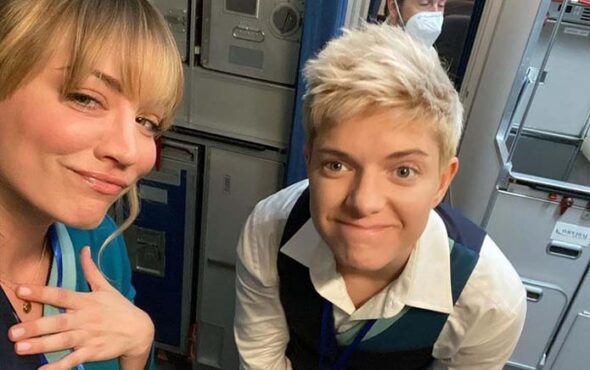 Kaley Cuoco has given fans their first glimpse of The Flight Attendant’s second season that recently started filming.

After becoming a hit in 2020, the mystery thriller is expected to return to our screens sometime in 2022.

Based on the 2018 novel of the same name, the series follows American flight attendant Cassie Bowden (played by Cuoco) – a reckless alcoholic who drinks during flights and spends her time off with strangers, including her passengers.

The synopsis says: “When she wakes up in a hotel room in Bangkok with a hangover from the night before, she discovers the dead body of a man who was on her last flight lying next to her, his throat slashed.

“Afraid to call the police, she cleans up the crime scene, then joins the other airline crew traveling to the airport.

“In New York City, she is met by Federal Bureau of Investigation (FBI) agents who question her about the layover in Bangkok. Still unable to piece the night together, and suffering intermittent flashbacks/hallucinations about it, she begins to wonder who the killer could be.”

Season two will feature a bunch of new cast members, including Mae Martin in a recurring role.

In a recent Instagram post, Cuoco gave fans a sneak peek behind the scenes of season two – including pictures of her and Martin.

“LA week 1 photo dump @flightattendantonmax what a cast, what a crew! season 2!” she wrote.

In one of the images, both can be seen dressed as flight attendants on what appears to be a plane – suggesting that Martin will be playing a colleague of Cuoco’s character.

Speaking to Digital Spy, Cuoco previously revealed that she wants to get involved in producing in the future.

She said: “I can totally see my path being solely in producing down the line. I told [executive producer Greg] Berlanti, their whole team, ‘I want your offices.’ So when they go take over and get an entire building, I want where they are. That’s my goal.”

Cuoco added: “Obviously, this has been my very first experience with it. I’ve learned a lot from my fellow producers, I learned that I don’t know as much as I thought, and how much of a team effort it takes to put a show on.”

The Flight Attendant airs on Sky and NOW in the UK and HBO Max in America.